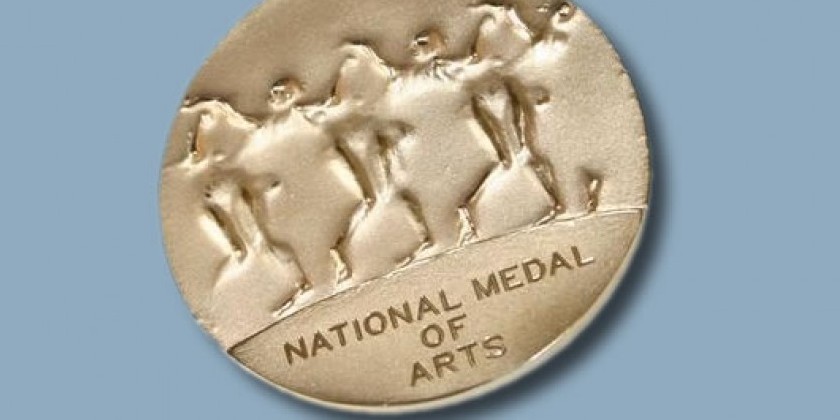 The National Endowment for The Arts

Company:
The National Endowment for The Arts

It was announced that Bill T. Jones, Artistic Director of New York Live Arts and Artistic Director/Co-Founder of the Bill T. Jones/Arnie Zane Dance Company, will be honored with the 2013 National Medal of Arts in a ceremony on July 28, 2014 at The White House. The National Medal of Arts is the highest award presented to artists and arts patrons by the United States government, and is awarded by the President of the United States to individuals or groups who "...are deserving of special recognition by reason of their outstanding contributions to the excellence, growth, support and availability of the arts in the United States."*

“I am very much honored to receive the 2013 National Medal of Arts,” said Jones. “At a time when the arts have an ever-dwindling presence and importance in education and daily life, I am grateful that the United States Government and President Barack Obama take the time to recognize the necessity of art, and to pay respect to the artistic voices that influence and inspire the public to challenge, question and discover meaning through the arts. I look forward to continuing to engage the people of the United States and the world through the art of movement.”

The National Medal of Arts has been awarded yearly to a select few artists by the National Endowment for the Arts, an independent agency of the federal government that was established by Congress in 1965 to provide support for artistic excellence, innovation and creativity, for the benefit of individuals and communities. Nominations are made annually by the American public, and awarded to selected nominees by the President of the United States. Since its inception in 1984 under President Ronald Reagan, the National Medal of Arts has been given to 302 individuals for their inspiration, creativity and hard work, who have meaningfully deepened the cultural life of the nation.

*Text and quote provided by the National Medal of Arts website.

Bill T. Jones, Artistic Director of New York Live Arts and Artistic Director/Co-Founder of the Bill T. Jones/Arnie Zane Dance Company, is a multi-talented artist, choreographer, dancer, theater director and writer who has received major honors ranging from a 1994 MacArthur “Genius” Award to Kennedy Center Honors in 2010. Honored with the 2014 Doris Duke Award, Jones was recognized as Officier de l’Ordre des Arts et des Lettres by the French Government in 2010, was inducted into the American Academy of Arts & Sciences in 2009 and named “An Irreplaceable Dance Treasure” by the Dance Heritage Coalition in 2000. His ventures into Broadway theater resulted in a 2010 Tony Award for Best Choreography in the critically acclaimed FELA!, the new musical co-conceived, co-written, directed and choreographed by Mr. Jones. He also earned a 2007 Tony Award for Best Choreography in Spring Awakening as well as an Obie Award for the show’s 2006 off-Broadway run. His choreography for the off-Broadway production of The Seven earned him a 2006 Lucille Lortel Award.

Mr. Jones began his dance training at the State University of New York at Binghamton (SUNY), where he studied classical ballet and modern dance. After living in Amsterdam, Mr. Jones returned to SUNY, where he became co-founder of the American Dance Asylum in 1973. In 1982 he formed the Bill T. Jones/Arnie Zane Dance Company (then called Bill T. Jones/Arnie Zane & Company) with his late partner, Arnie Zane.

In addition to creating more than 140 works for his own company, Mr. Jones has received many commissions to create dances for modern and ballet companies, including Alvin Ailey American Dance Theater, Boston Ballet, Lyon Opera Ballet, and Berlin Opera Ballet, among others. In 1995, Mr. Jones directed and performed in a collaborative work with Toni Morrison and Max Roach, Degga, at Alice Tully Hall, commissioned by Lincoln Center's Serious Fun Festival. His collaboration with Jessye Norma, How! Do! We! Do!, premiered at New York's City Center in 1999.

His work in dance has been recognized with the 2010 Jacob’s Pillow Dance Award; the 2005 Wexner Prize; the 2005 Samuel H. Scripps American Dance Festival Award for Lifetime Achievement; the 2003 Dorothy and Lillian Gish Prize; and the 1993 Dance Magazine Award. His additional awards include the Harlem Renaissance Award in 2005; the Dorothy B. Chandler Performing Arts Award in 1991; multiple New York Dance and Performance Bessie Awards for his works The Table Project (2001), The Breathing Show (2001), D-Man in the Waters (1989) and the Company’s groundbreaking season at the Joyce Theater (1986). In 1980, 1981 and 1982, Mr. Jones was the recipient of Choreographic Fellowships from the National Endowment for the Arts, and in 1979 he was granted the Creative Artists Public Service Award in Choreography.

Mr. Jones has been featured in numerous television, radio, film and documentary programs over the years. In 2013, Jones was profiled by PBS-affiliate Thirteen/NYC-ARTS and featured on NPR’s popular Talk of the Nation program and the acclaimed Made HERE documentary series.In recent years, he has also beenprofiled on NBC Nightly News, The Today Show and the Colbert Report. Also in 2010, he was featured in HBO’s documentary series MASTERCLASS, which follows notable artists as they mentor aspiring young artists. In 2009, Mr. Jones appeared on one of the final episodes of Bill Moyers' Journal, discussing his Lincoln suite of works. He was also one of 22 prominent black Americans featured in the HBO documentary The Black List in 2008. In 2004, ARTE France and Bel Air Media produced Bill T. Jones-Solos, highlighting three of his iconic solos from a cinematic point of view. The making of Still/Here was the subject of a documentary by Bill Moyers and David Grubin entitled Bill T. Jones: Still/Here with Bill Moyers in 1997. Additional television credits include telecasts of his works Last Supper at Uncle Tom’s Cabin/The Promised Land (1992) and Fever Swamp (1985) on PBS’s “Great Performances” Series. In 2001, D-Man in the Waters was broadcast on the Emmy-winning documentary "Free to Dance."

He has received honorary doctorates from Yale University, Art Institute of Chicago, Bard College, Columbia College, Skidmore College, the Juilliard School, Swarthmore College and the State University of New York at Binghamton Distinguished Alumni Award, where he began his dance training with studies in classical ballet and modern dance.

In addition to his Company and Broadway work, Mr. Jones also choreographed Sir Michael Tippet’s New Year (1990) for Houston Grand Opera and Glyndebourne Festival Opera. His Mother of Three Sons was performed at the Munich Biennale, New York City Opera and the Houston Grand Opera. Mr. Jones also directed Lost in the Stars for the Boston Lyric Opera. Additional theater projects include co-directing Perfect Courage with Rhodessa Jones for Festival 2000 in 1990. In 1994, he directed Derek Walcott’s Dream on Monkey Mountain for The Guthrie Theater in Minneapolis, MN.

About The National Endowment for The Arts

The National Endowment for the Arts (NEA) was established by Congress in 1965 as an independent agency of the federal government. To date, the NEA has awarded more than $5 billion to support artistic excellence, creativity, and innovation for the benefit of individuals and communities. The NEA extends its work through partnerships with state arts agencies, local leaders, other federal agencies, and the philanthropic sector.

New York Live Arts is an internationally recognized destination for innovative movement-based artistry offering audiences access to art and artists notable for their conceptual rigor, formal experimentation and active engagement with the social, political and cultural currents of our times. At the center of this identity is Bill T. Jones, Executive Artistic Director, a world-renowned choreographer, dancer, theater director and writer.

We commission, produce and present performances in our 20,000 square foot home, which includes a 184-seat theater and two 1,200 square foot studios that can be combined into one large studio. New York Live Arts serves as home base for the Bill T. Jones/Arnie Zane Dance Company, provides an extensive range of participatory programs for adults and young people and supports the continuing professional development of artists.