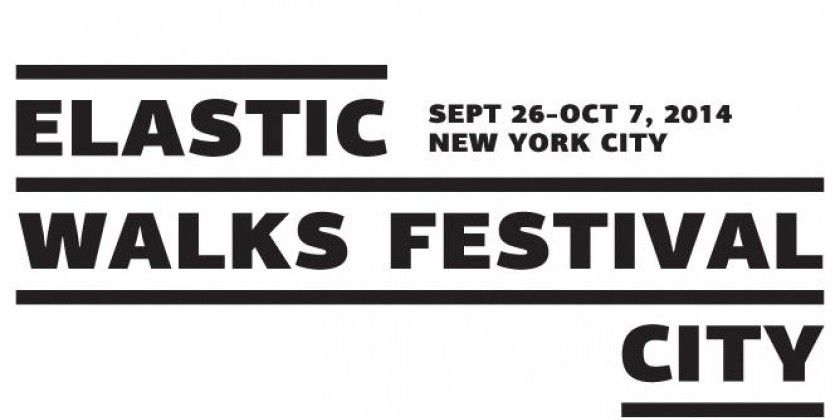 Elastic City celebrates its fifth year by presenting the first-ever participatory walks festival. The 12-day Elastic City Walks Festival, in which all events are free and open to the public via RSVP, will take place in outdoor locations throughout New York City, September 26 - October 7.

A diverse lineup of poets, performing and visual artists are creating and will lead walks. Additionally, 20 artists and curators will convene at Pratt Institute in Brooklyn on September 28 for a total of four unique talks that will contextualize the growing genre of participatory walks, the brainchild of poet and artist Todd Shalom, who founded Elastic City five years ago.

The festival will conclude October 7 with a benefit party at the new Soho gallery Jack Geary Contemporary, for which tickets are on sale at $40/person at: www.elastic-city.org/donate

In addition to the information below, more -- including brief biographies of those leading walks and talks – can be found at www.elastic-city.org/artists

Specific walk details are below:

Think of Columbus Circle as a mandala – a circular intersection that connects the crossing of transportation, recreation, museum life, information age – all under the mantel of the Columbus monument, a symbol of conquest. The destruction and reuse of native pathways are taken for granted and forgotten with the not-so-subtle view of CNN as a backdrop for America’s news. On Mandala: Reimagining Columbus Circle, Karen Finley will lead participants as we question and consider the circular intersection and all of its complexities, challenges and possibilities. The group will be encouraged to generate their own creative responses that question urban forms today.

This walk holds 12 people and is co-presented with Columbia University Graduate School of Architecture, Planning and Preservation (GSAPP).

Starting Point: This walk will meet at the Columbus statue in the middle of Columbus Circle in Manhattan.
Duration: 90 minutes
Age: 18+

Join ritualists Amichai Lau-Lavie and Shawn Shafner on a Judeo-Pagan walk in Manhattan during the first week of the Jewish New Year. Participants will radically revise Tashlich, the annual Jewish shedding ceremony, in which breadcrumbs are substituted for transgressions and thrown into a living body of water. The group will walk from Hell's Kitchen down to the river, pausing to cast away our private and public histories: discarding assumptions, handing over possessions and making room for change.

This walk holds 30 people and is presented in partnership with Lab/Shul.

Starting Point: 325 W. 49th Street; Manhattan (This walk will meet in front of Starbucks. Please bring an item of clothing or household utensil that you’d like to get rid of.)
Duration: 90 minutes
Age: 13+

Gravity is a given. Its anchor is a constant force within constant spin. By changing our physical orientation in space, we may fundamentally upend, well, just about everything.

For Downside Up, Kristin Geneve Young will lead participants in challenging their senses of vision, equilibrium and proprioception. Balance tests, climbing exercises and aerial inversions will be used to focus the senses throughout the walk, inviting the group to respond to overlooked pockets of Midtown.

This walk holds 12 people and is presented in partnership with Aerial Arts NYC.

Signature Walk takes you through a selection of Elastic City's playful and poetic ways of experiencing the city. We might make monuments with our bodies in response to monuments in public space, craft visual poems from found objects, create songs using text from storefronts and so much more.

Starting Point: 51 Lincoln Road; Brooklyn (This walk will meet outside of Lincoln Park Tavern.)
Duration: 75 minutes
Language: The walk will be held in English but Todd also speaks Spanish.
All ages

A Persian grey lemon is debatably both and neither a fruit and a spice. Its vague status helps it easily cross through international borders.

For Twelve Grey Lemons, urbanist/artist Nisan Haymian will lead participants down personal paths that define the cultural Persian landscapes of New York, questioning concepts of urban immigration, hybrid identity, civic imagination and the politics of self. In this immersive walk, the group may delight in new ways of tasting familiar flavors while getting an inside scoop from local residents.

Twelve Grey Lemons stars 12 artists and is made possible through the generous support of Asylum Arts.

Nighttime changes our perception of things. It changes the way we think and feel as it casts inky shadows that morph surroundings into other worlds. Join Anthony Goicolea on an evening walk away from the city. No lights, no phones, no GPS. From there, Anthony will stage the group for the camera, as we play with light in the dark of the woods.

This walk holds 10 people and is co-presented with Brooklyn Museum as part of the "Crossing Brooklyn" exhibition.

Date/Time: Saturday, October 4, 2014; 6:30pm
Starting Point: The starting point will be revealed to participants upon sign-up. It will be near the Graham stop on the L train in Brooklyn.
Duration: 4 hours
Age: 13+

The beauty, class mix and historical depth of the West Village once inspired and produced political and artistic ideas for the world. Now it is defined by excess, simulacra and homogenization. Favorites by Sarah Schulman, Todd Shalom and Niegel Smith will engage participants in the generational class-clash in the West Village, uncovering, contrasting and performing its past and present. The walk will be enhanced by the memories and current realities of queer tenants, who will reveal their favorite places that are gone and their favorite places that remain.

Favorites holds 15 people and is co-presented with Brooklyn Museum as part of the "Crossing Brooklyn" exhibition.

For Playing with Steps, participants will use unusual equipment devised by Michel Groisman to touch and be touched by the ground. And the ground can be anything: a pillow, a sheet of paper, a sound, the simple presence of another. Michel will lead the group in experimenting with different ways of walking—simultaneously outside and in, as every step outwards is a step inwards and vice-versa.

Playing with Steps holds 12 people and is open to all abilities.

Note from Michel: When my wife was two months pregnant, I gradually lost my ability to walk. Actually, I could walk, but only backwards. I could run forward, but could not walk. Now I'm getting better, but I’ve felt this way for almost 2 years.

Starting Point: 33 E. 17th Street; Manhattan (This walk will meet in front of Barnes & Noble in Union Square.)
Duration: 90 minutes
Language: The walk will be held in English but Michel also speaks Portuguese.
All ages

Since 2010, Elastic City has been working with artists to rigorously investigate and interrogate the participatory walk. Through this work, the organization has helped to pioneer a new genre within the performing arts. During the talks, moderators, panelists and participants will examine the participatory walk and its related forms while questioning its history, present and potential for the future.

Each talk will hold approximately 75 people and will last about 90 minutes.

Specific talk details are below:

Sunday, September 28, 2014
11:00am – 12:30pm: A Genealogy of the Participatory Walk
http://www.elastic-city.org/walks/genealogy-participatory-walk

The junction of creative thoughts and walks has its western roots in Aristotelian philosophy, where the act of walking was directly related to constructive ideas and actions. One immense historical lap later, the Surrealists, the Situationists, artists working on soundwalks, walking tour guides and artists that have solo or collective walking practices have deepened the concept of creative ambulation. The four presenters will explain their walking practices in the context of their respective artistic and historical backgrounds, pinpointing the varying levels of participation and inspiration involved in their work, and where they think the walk form is moving.

This talk will question and explore the political implications of walking as a form of cultural production. How has the walk (wandering, strolling, getting lost) been figured as political resistance in previous eras? What types of engagement or resistances are made possible by singular or collective somatic movement in urban spaces? What new bodies and bodies of knowledge are made possible by—and necessitate—taking to the streets? What damaging ideologies can be overturned by bodies claiming public space? Does the increased interest in the walk as an art form articulate a necessary gesture of resistance against a speed-obsessed techno-capitalist machinery? To the disciplinary and bureaucratic regimes of urban planning? The talk will investigate these questions, and more, with lots of opportunity for dialogue and exchange with the audience.

Artists who have led walks with Elastic City will talk about how their other work has been informed by leading a participatory walk. How does the walk function in harmony with and in contrast to the artists’ primary discipline and their ways of working? What makes for a successful walk? Is this a viable form? Hyperallergic Senior Editor Jillian Steinhauer will provide context for the walk in relation to the growing trend of participation in art.

Ayesha Jordan, Nancy Nowacek and Veit Stratmann will join moderator Niegel Smith in a living room style conversation that questions the limits of what is possible in participatory performance. The artists will respond to real-time prompts and think on their feet as a way to expose their individual methodologies. Join us as we consider the motivations and intentions behind participatory performance and perhaps provide some inspiration for those who dare to dream big.

On Tuesday, October 7, 2014 from 7-10pm, Elastic City will host an open-bar benefit party for approximately 150 guests at Jack Geary Contemporary, at 185 Varick Street in SoHo. The event will bring together donors, artists, academics, creative professionals, sponsors and fans.

The party will start off in whispers and will change throughout the night, as artists re-define the space. There will be a raffle, silent auction, and more.

Tickets, $40 each, can be purchased at http://www.elastic-city.org/donate

Elastic City is now in its fifth year of presenting participatory walks by artists throughout and outside of New York. By the end of 2014, over 80 artists will have led walks in New York, Detroit, San Francisco, Berlin, Buenos Aires, London, Mexico City, Montreal, Paris, Reykjavik, São Paulo and Tokyo.

Todd Shalom, a New York native, devised Elastic City while traveling in Peru and founded the organization in 2010. Having worked in a variety of artistic genres (poetry, sound and performance), he decided to expand upon his existing repertoire of sensory-based walks and commission other artists to lead walks in their own disciplines. Todd works with each artist to help adapt their ideas to the walk format. Elastic City walks explore various planes of human sensory and aesthetic experience, such as dance, architecture, poetry, sound art, the paranormal and ritualistic performance.

In 2012, Elastic City launched its educational program, beginning with a series of “ways.” Whereas a walk offers the opportunity to participate in a narrative series of poetic moments, "ways" are experiential workshops that explicitly engage participants in *how* to generate these moments through exercises, tools and techniques offered by Elastic City artists. In a "way," participants gather in an intimate group to prompt exchange, tone one's gut feeling and sharpen poetic decision-making. Elastic City ways typically do not involve walking and are offered outdoors unless otherwise noted.

Signups can be made at the starting point if there is space or in advance via the Elastic City website at: http://www.elastic-city.org