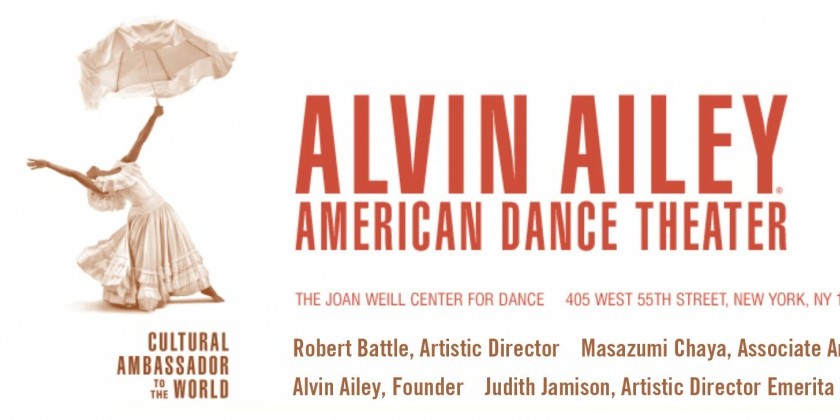 NEW YORK, NY — November 14, 2014 — The Board of Trustees of Alvin Ailey Dance Foundation and Executive Director Bennett Rink today announced that more than $40 million has been raised to date to cap the tremendous legacy of retiring Chairman of the Board Joan H. Weill.  The unprecedented gift, led by the generosity of Sanford I. Weill, inaugurates the Campaign for Ailey’s Future to support the expansion of Ailey’s building and the extension of Ailey’s artistic and educational initiatives.

In an extraordinary gesture to honor Joan, her husband Sandy Weill has already personally pledged more than $16 million to date, and will continue to match additional leadership gifts pledged to the Campaign through the end of this year’s Opening Night Gala Benefit on December 3.  He also will match gifts of $100,000 or more made to the Gala, which will honor Mrs. Weill for her twenty years of service on the Ailey Board, including fourteen as Chairman, and her many other contributions to the cultural community.  In enthusiastic support of the Campaign, an exceptional donation of $5 million has been gifted by The Elaine P. Wynn & Family Foundation and $3 million has been pledged by both Ronald O. Perelman and Daria L. & Eric J. Wallach.  Major commitments of $1 million or more have been received from Bloomberg Philanthropies, the Ford Foundation, and Pamela D. Zilly & John H. Schaefer.

“We are not aware of any other gift of such magnitude, with such transformative potential, honoring a cultural leader upon her retirement,” Bennett Rink stated. “Joan Weill has lifted up the Ailey organization like no one else.  She has enabled us to realize our dream of a permanent home, and she joined with Sandy to ensure the success of the endowment campaign for our 50th anniversary in 2008. To receive contributions of over $40 million on top of all this creates a legacy that is truly unparalleled and is another historic milestone for Ailey.”

The Campaign will allow Ailey to undertake a dramatic expansion of key programmatic initiatives and also to enlarge its permanent home, The Joan Weill Center for Dance.  Opened in 2005, Ailey’s building established itself as by far the largest and most active destination for dance in New York City, attracting more than 200,000 visitors annually and, because of its success, is bursting at the seams.   Enrollment in the Ailey School’s Junior Division has risen 89 percent since 2005, The Ailey Extension classes have now welcomed more than 80,000 people, and demand for Ailey’s Citigroup Theater has intensified to the point that 120 other companies use the space annually.

Sanford I. Weill stated, “Joan has embraced all of the aspects of the Ailey organization, from its great artistic tradition to its educational mission to its ongoing work as an American Cultural Ambassador to the World. For twenty years now, she has had a passion for building Ailey into the strongest, most successful dance organization anywhere. Her achievements are already legendary—and I’m delighted to say that many of us are stepping forward to recognize them in the best way possible, by contributing to this Campaign and taking Ailey to a new level.”

With a long-range goal of $50 million, the Campaign for Ailey’s Future will empower the organization to ramp up its work in every program area.  Leading the implementation will be two newly elected leaders of the Board of Trustees to carry on Joan Weill’s legacy. As of November 13, 2014, the Board has voted to confirm that, beginning January 1st, Daria L. Wallach,  Managing Partner of Lord, Abbett & Co. LLC,  will be Chairman of Alvin Ailey Dance Foundation, and Debra L. Lee, Chairman and Chief Executive Officer of BET Networks, will be President.  At that time, Joan Weill will become Chairman Emerita.  Ailey is now analyzing a variety of options to expand their New York flagship with additional rehearsal studios and educational space.  Also being studied are further programs to support Robert Battle’s artistic vision, enhance impactful educational offerings, and using technology to extend the reach of all aspects of the organization.  Ailey expects to announce details within the year.

Joan Weill stated, “The Ailey organization has a bold vision for the future. I am deeply grateful to my husband Sandy, and to all of the very generous donors to the Campaign and the Gala, for helping turn this vision into a reality, moving Ailey into the next exciting phase of its life. With strong new Board leadership now confirmed, and with our brilliant Artistic Director Robert Battle showing the way, I know that great new achievements are in store.”

“This is a thrilling time for our organization, thanks to Joan’s tireless efforts, the astounding generosity of her husband Sandy, and all who are supporting Ailey so meaningfully at this pivotal moment.  After leading as Board Chair with such caring, wisdom, and grace, there is no one who deserves to take a bow more than Joan,” stated Artistic Director Robert Battle.  “As we open our holiday season, we applaud her for what she has done for Ailey over the past two decades, as well as for the opportunity she is providing for us to inspire and educate far into the future.”

Alvin Ailey American Dance Theater, recognized by U.S. Congressional resolution as a vital American “Cultural Ambassador to the World,” grew from a now-fabled March 1958 performance in New York that changed forever the perception of American dance. Founded by Alvin Ailey, and guided by Judith Jamison beginning in 1989, the Company is now led by Robert Battle, whom Judith Jamison chose to succeed her on July 1, 2011. Alvin Ailey American Dance Theater has performed for an estimated 23 million people in 71 countries on 6 continents, promoting the uniqueness of the African-American cultural experience and the preservation and enrichment of the American modern dance tradition. In addition to being the Principal Dance Company of New York City Center, where its performances have become a year-end tradition, the Ailey company performs annually at the John F. Kennedy Center for the Performing Arts in Washington, DC, the Auditorium Theatre in Chicago, the Adrienne Arsht Center for the Performing Arts of Miami-Dade County in Miami, The Fox Theatre in Atlanta, Zellerbach Hall in Berkeley, CA and at the New Jersey Performing Arts Center in Newark where it is the Principal Resident Affiliate), and appears frequently in other major theaters throughout the United States and the world during extensive yearly tours. The Ailey organization also includes Ailey II (1974), a second performing company of emerging young dancers and innovative choreographers; The Ailey School (1969), one of the most extensive dance training programs in the world; Ailey Arts in Education & Community Programs, which brings dance into the classrooms, communities and lives of people of all ages; and The Ailey Extension (2005), a program offering dance and fitness classes to the general public, which began with the opening of Ailey’s permanent home—the largest building dedicated to dance in New York City, the dance capital of the world —named The Joan Weill Center for Dance, at 55th Street at 9th Avenue in New York City. For more information, visit www.alvinailey.org.