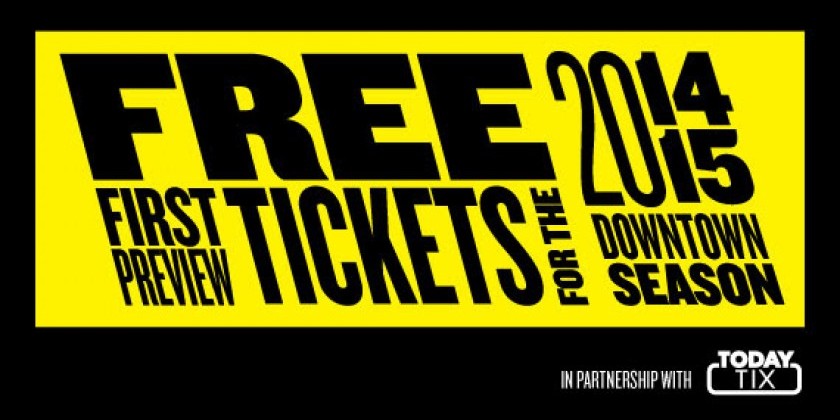 Continuing The Public Theater’s mission to make theater accessible to all, free tickets will be given out for the first performance of shows in The Public’s 2014-15 downtown season at Astor Place. In partnership with TodayTix, New York’s premiere theater ticket app, the FIRST PERFORMANCE “FREE FOR ALL” initiative expands on Joe Papp’s vision to engage the whole city in the transformative experience of theater that started more than 50 years ago with Free Shakespeare in the Park at the Delacorte and has since served more than five million people with over 150 free productions.


First Performance "Free for All" dates:

Free tickets will be available via TodayTix mobile lottery, launching one week before the first preview of each show in the 2014-2015 season. Winners will be notified by email and push notification between 12pm and 3pm on the day of the first preview. You must confirm your winning tickets in the TodayTix app within one hour of being notified. A limited number of tickets will also be distributed through an in-person lottery in the lobby of The Public Theater.

TO ENTER THE MOBILE LOTTERY:

1) Download the TodayTix app, open it, and select TodayTix Free First Previews with The Public.
2) Enter the lottery for two free tickets.**
3) On the confirmation screen, you may double or triple your odds by sharing your entry via Facebook and Twitter.
Make sure your name and e-mail address are correct and that TodayTix push notifications are turned on, so you can receive confirmation of lottery status. You will be notified if you've won between noon and 3pm on the day of the show.  You must confirm your winning tickets in the TodayTix app within one hour of being notified. Pick up your tickets at The Public Theater Box Office between 5:30 and 7:30 pm before the 8pm performance, or they will be released to the standby line.

IN PERSON AT THE PUBLIC THEATER:

A limited number of free tickets will be distributed via lottery in the lobby of The Public Theater at Astor Place. Entries will be accepted starting at 11am with names drawn at 12pm. Participants will be asked to specify if they want 1 or 2 tickets during entry. One entry per person.
**No purchase necessary. Enter up to one week in advance. Winners who do not confirm their tickets in app, or do not pick their tickets up at The Public Box Office by 7:30 pm forfeit their seats and tickets will be released to the standby line. Any purchase will not enhance chances of winning. Odds of winning depend on the number of eligible entries received. Must be 18 or older to enter. Lottery tickets may not be transferred and have no retail value, and are not redeemable for cash. Void where prohibited. Entrants agree to these Official Rules and the decisions of the Sponsor, which are final and binding in all matters relating to this lottery.