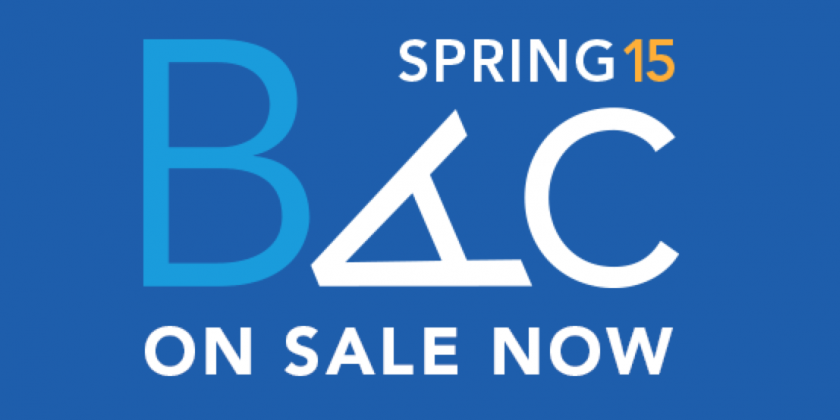 New York, NY — Baryshnikov Arts Center (BAC) celebrates its tenth anniversary in 2015, beginning with the spring season performance and residency series running January 14 to June 28. Programs at BAC throughout 2015 will exemplify the kind of creative engagement for which BAC has earned recognition during the last decade: presenting and nurturing artists from around the world, at varying stages in their careers, and who are working innovatively across disciplines.

“When our doors opened in 2005, BAC became a home for artists to work in a supportive, respectful environment. It is very exciting to be able to make opportunities for people to create. Many times, works developed here are later performed here, and that’s reflected in our anniversary season. The spirit of innovation and collaboration that artists bring to our studios and stages is the driving force behind BAC, and is what will propel us into the next ten years and beyond,” said Mikhail Baryshnikov, BAC’s Artistic Director.

A highlight of BAC’s anniversary year is the New York Premiere of Carmen de Lavallade’s As I Remember It, February 19—25 in the Jerome Robbins Theater. The intimate solo work spanning the dance luminary’s venerable, six-decade career, was developed during spring 2013 and 2014 residencies at BAC, in collaboration with director Joe Grifasi and co-writer/dramaturg Talvin Wilks. As I Remember It premiered at Jacob’s Pillow Dance Festival in June 2014 to critical acclaim. The New York engagement at BAC represents a homecoming for Ms. de Lavallade, before continuing the national tour of her solo performance.

In June, BAC co-presents with Lower Manhattan Cultural Council the U.S. Premiere of Souvenir by Sweden-based choreographer Rachel Tess as part of River To River Festival 2015. Developed in part during a spring 2013 residency at BAC, Souvenir is a self-contained theater installation and dance performance exploring the concept of mobile architecture versus pre-existing institutional structures, and how this design influences the making and viewing of performance. Created by Tess in collaboration with designer/craftsman Gian Monti, Souvenir will take place on Governors Island in the New York Harbor—installation and performance dates to be announced.

At the core of BAC’s mission is the Residency Program: providing time, space, and resources for creative experimentation and artistic freedom. This spring, BAC hosts 11 residencies for artists and companies toa¨develop innovative new projects and collaborations. Seven of these residencies will take place March 2—27 during BAC Space: an intensive residency period during which artists will work concurrently in all of BAC’s studios and theaters—a format designed to encourage creative cross-pollination. BAC Space Spring 2015 will include a series of public events to be announced by February 1.

All tickets for BAC Presents are on sale now and can be purchased online or by phone:

January 14—16 (Wednesday through Friday at 8PM)

“The blending of their talents has produced some of the most impressive dance/visual spectacles to come out of Seattle in recent years.” – The Seattle Times

BeginAgain questions the multiplicity of self, memory, and perspective through two parallel solos weaving in and out of each other. Juniper Shuey’s futuristic design explores new technological methods juxtaposed against Zoe Scofield’s intense choreography, featuring Scofield and Ariel Freedman, triggering a raw tableaux of stage designs and movement.

“A sound that has just about everything one wants from a quartet, most notably precision, warmth and an electricity that conveys the excitement of playing whatever is on their stands at the moment.”

As I Remember It (N.Y. Premiere)

As I remember It was developed in residence at BAC.
This presentation of As I Remember It was made possible by the New England Foundation for the Arts’ National Dance Project.
Generous support provided by Jeremy Smith.

A series of concerts in an intimate salon setting.

Pianist and composer Stephen Prutsman, who moves effortlessly across music of all idioms, turns his formidable talents to jazz, performing a complete rendition of his recording Passengers.

An “intoxicating combination of power and grace.” – Toronto Star

BAC and Lower Manhattan Cultural Council (LMCC) co-present Souvenir, a self-contained theater that sets boundaries for a duet exploring themes of mobility and territoriality, created by choreographer Rachel Tess in collaboration with Swedish designer-craftsman Gian Monti. The U.S. Premiere of Souvenir will be performed on Governors Island as part of River To River Festival 2015. For installation viewing hours and performance details, bacnyc.org/performances.

"Souvenir" was developed during a 2013 Princess Grace Foundation-USA Works-in-Progress Residency at BAC.

This presentation is co-commissioned by BAC and LMCC, with generous support provided by Princess Grace Foundation-USA.