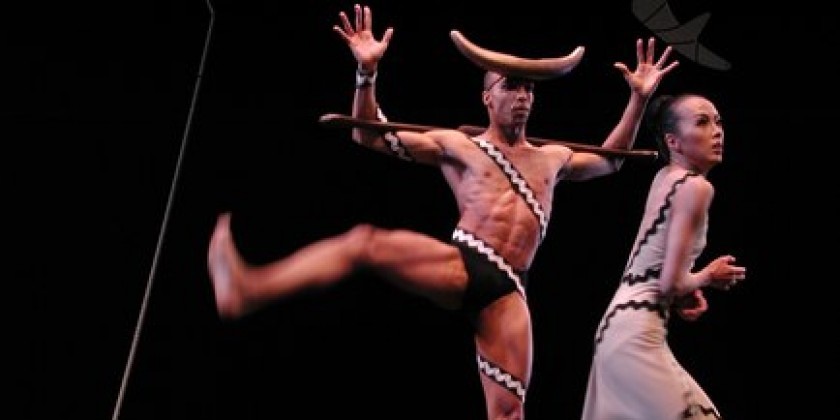 Featuring Martha Graham masterworks and premieres by guest choreographers including

Annie-B Parson’s The Snow Falls in the Winter

with four new works for the Lamentation Variations series by

New York, NY – August 25, 2014 – The Martha Graham Dance Company’s Shape&Design theme explores Graham’s defining influence as an American modernist with programs that feature the sculptural and architectural aspects of choreography by Graham and others. The Company’s two-week season at The Joyce Theater in New York City, February 10–22, 2015, will offer Graham classics, new commissions, and premieres by guest choreographers in three varied programs. The Company’s expansive 2014-15 season also includes a twenty-city U.S. tour, and several projects related to Shape&Design, including partnerships with the Museum of the Fashion Institute of Technology and the international art gallery Hauser & Wirth.

The Company’s Shape&Design season at The Joyce will feature the Graham masterworks Panorama and Chronicle, works from 1935-36 that set the standard for geometric and structural force onstage. Graham’s Embattled Garden (1958) and Errand into the Maze (1947) will be presented as prime examples of Graham’s collaboration with sculptor Isamu Noguchi and their groundbreaking reinvention of space. The now iconic shapes and gestures Graham pioneered will also be represented by the solos, Satyric Festival Song (1932) and Deep Song (1937).

Martha Graham’s revolutionary sculptural approach to the moving body can be found in all of the classics, but in none more powerfully than Lamentation, created in 1930. In celebration of the 85th anniversary of Lamentation, the Company has commissioned four of today’s most exciting choreographers to create Lamentation Variations. Kyle Abraham, Michelle Dorrance, Liz Gerring, and Sonya Tayeh will each contribute a piece inspired by Graham’s signature solo. All four works will premiere at The Joyce.

The Joyce season also includes the New York premiere of Rust, created for the Company in 2013 by esteemed choreographer Nacho Duato. This dark, striking quintet for men is performed to a score by Arvo Pärt. Also featured is the Company premiere of The Snow Falls in the Winter (2008) by Annie-B Parson, with a new commissioned score by David Lang. Inspired by Ionesco’s “The Lesson,” the piece deftly weaves spoken text and movement in Parson’s distinctive dance theater style. Andonis Foniadakis’ Echo, set to an original score by Julien Tarride, will also be presented. Created for the Company in 2014, this stunning dance has only been seen in New York City on two occasions and will tour to 20 cities during the Company’s 2014-15 season.

In addition to the Joyce performances, the Company will present several other projects and events related to Shape&Design. In October, the Company will perform as part of The Museum at FIT’s Fashion Culture Series, in conjunction with the Dance and Fashion exhibit. Two of Graham’s classic solos – Lamentation and Spectre-1914 – will be presented offering a look at seminal examples of Graham’s revolutionary costuming. The event takes place on October 28, at 6pm, and includes a conversation with artistic director Janet Eilber, MFIT curator Melissa Marra, and designer DooRi. The exhibition, which runs from September 13 to January 3, will also include several costumes by Martha Graham and her collaborators. The FIT Museum is located at Seventh Avenue South and 27th Street in Manhattan. www.fitnyc.edu/museum

In December, the Company will perform a selection of Graham’s most sculptural choreography on the occasion of Thomas Houseago’s latest exhibition at Hauser & Wirth. Houseago and Graham, though separated by decades, both draw inspiration from primal gesture and the emotional architecture of the body. The Company will perform selections from Graham classics such as Errand into the Maze, Canticle for Innocent Comedians, and Dark Meadow in response to Houseago’s immersive installation. Performances take place December 11-13, at Hauser and Wirth, 511 West 18th Street, in Manhattan. www.hauserwirth.com

The Company also continues its GrahamDeconstructed series this fall offering audiences an up-close and behind-the-scenes look at Graham masterworks in the intimate setting of the Company’s Studio Theater. On September 16 and 17 Graham Company alum Peter Sparling will present Notes on a Voyage — a dance and media event that focuses on Graham's process to create Voyage (1953); and on October 30, the company will present Appalachian Spring Up Close and Personal — a complete performance of Appalachian Spring in costume and with the classic Noguchi set, on the 70th anniversary of its premiere. The Martha Graham Studio Theater is located at 55 Bethune Street, 11th Floor, in Manhattan.

The Martha Graham Dance Company has been a leader in the development of contemporary dance since its founding in 1926. Today, the Company is embracing a new programming vision that showcases masterpieces by Graham, her contemporaries and their successors alongside newly commissioned works by contemporary artists. With programs that unite the work of choreographers across time within a rich historical and thematic narrative, the Company is actively working to create new platforms for contemporary dance and multiple points of access for audiences.

Since its inception, the Martha Graham Dance Company has received international acclaim from audiences in more than 50 countries throughout North and South America, Europe, Africa, Asia, and the Middle East. The Company has performed at the Metropolitan Opera, Carnegie Hall, the Paris Opera House, Covent Garden, and the John F. Kennedy Center for the Performing Arts, as well as at the base of the Great Pyramids in Egypt and in the ancient Herod Atticus Theatre on the Acropolis in Athens. In addition, the Company has also produced several award-winning films broadcast on PBS and around the world. More information can be found at www.marthagraham.org.