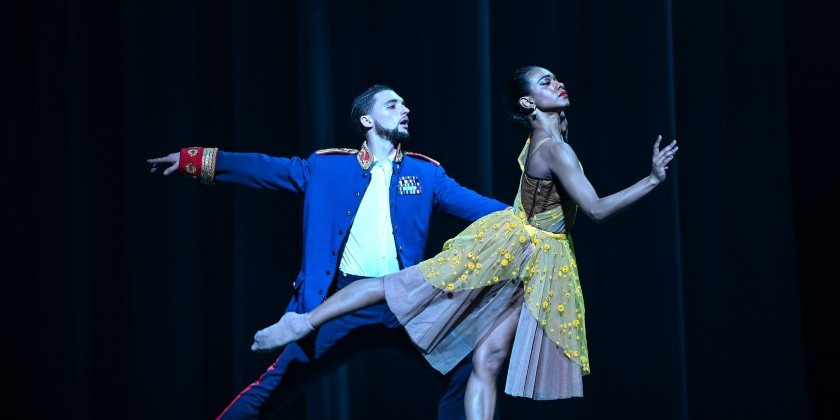 Ballet Hispánico, the nation's renowned Latinx dance organization recognized as one of America's Cultural Treasures, announces the Washington, D.C. premiere of Doña Perón at the Kennedy Center, November 30 - December 3, 2022, Wed - Sat at 8pm, Sat at 2pm. Tickets are currently available on subscription and can be purchased online, by phone (202-416-8500), or in-person with the Kennedy Center, 2700 F Street NW, Washington, D.C. Date for single tickets on sale will be announced at a later date.

Last seen at the Kennedy Center in 2013, Ballet Hispánico returns with internationally renowned choreographer Annabelle Lopez Ochoa's Doña Perón, set to music by Peter Salem. Doña Perón is the first full evening-length work commissioned by the Company and reclaims the narrative of the iconic Latina figure by a Latina choreographer. The work is an explosive portrait of Eva "Evita" Perón, one of the most recognizable, and controversial, women in Argentinian history. The illegitimate daughter of a prosperous farmer, Evita concealed this shameful past as she rose the ranks from dancehall performer to Argentina's First Lady - all before her untimely death at the age of 33.

Doña Perón brings to light the extremes of power at the forefront of Evita's life. Her work as an activist and advocate for Argentina's women and working class raised skepticism as she indulged in the opulence of a high-class life. A voice for the people, or a deceitful actress? Ochoa explores these diverging legacies and more in this seminal work, marking Ballet Hispánico's move beyond their 50th Anniversary and the continuation of centering the voices of Latinx artists.

"She's not a fairytale character, she's not a literary character," said Annabelle Lopez Ochoa. "She's a real woman, and for me, it's interesting to put her on stage because she's difficult to pinpoint. I want to give female dancers real roles, not always the nice roles. Women are complex and it's nice to show all of these facets. I'm very grateful that I can put this woman, Evita Perón, on stage as a female choreographer."

Nancy Meckler (Artistic Collaborator) is a director known for her work in the United Kingdom with Shared Experience, where she was a joint Artistic Director alongside Polly Teale. Meckler has directed a production of I.D. She was a member of London-based collective the Freehold Theatre Company (1969-1973), where she eventually became Director. The group employed devising methodology to create work, and was the first company to receive the John Whiting Award for "new and distinctive development in dramatic writing," traditionally given to playwrights.

Peter Salem (Music) is very much in demand as a ballet composer, and has recently completed his third ballet, Broken Wings, for the English National Ballet, which opened to huge critical and popular success in April 2016. His media work is also internationally renowned, principally his music for "Call the Midwife," which won the Best Television Programme Music category at the Music and Sound Awards 2016, as well as other high profile productions. His extensive theatre work includes many scores for productions by the Royal Shakespeare Company, the National Theatre, and Shared Experience Theatre.

Mark Eric (Costume Design) is a costume and fashion designer based in New York City, where he trained at the Fashion Institute of Technology. After designing for several New York City fashion houses, he discovered his passion for costuming for the stage. He enjoys bringing his couture fashion sensibility to his design, often employing artisanal techniques when creating his signature costumes. He has designed costumes for Robert Battle, Darrell Grand Moultrie, Annabelle Lopez Ochoa, Rennie Harris, Robbie Fairchild, Stefanie Batten Bland, Andrew McNicol, and Marguerite Donlon to name a few. He has costumed works for the Alvin Ailey American Dance Theater, American Ballet Theatre, BalletX, Ballet Hispanico, Ailey II, among others.

Christopher Ash (Lighting, Set, and Video Design) is a Philadelphia-based Designer and Filmmaker whose work has been seen in 13 countries and been recognized for 15 awards. Equally at home designing projections, scenery or lighting for theatre, opera, and dance as well as direction and cinematography for film. Christopher is currently involved in a multi-phase Guggenheim Works and Process commission with artist John Jarboe. He is also co-creator of an ongoing multi-sensory performance piece "Body Language" with Dublin based dance artist David Bolger and CoisCéim Dance Theatre.

About the Kennedy Center

The John F. Kennedy Center for the Performing Arts is America's living memorial to President John F. Kennedy, attracting millions of visitors each year to more than 2,000 performances, events, and exhibits. With its artistic affiliates, the National Symphony Orchestra and Washington National Opera, the Center is one of the nation's busiest performing arts centers dedicated to providing world-class art, powerful education, and outstanding memorial experiences to the broadest possible constituency. Across all its offerings, the Kennedy Center is committed to increasing accessible, inclusive opportunities for all people to participate in, and learn through the arts, including more than 400 free performances each year and a variety of Specially Priced Ticket programs for students, seniors, persons with disabilities, and others. On September 7, 2019, the Kennedy Center inaugurated the REACH, its first-ever major expansion. Designed by Steven Holl Associates, the REACH provides visitors with new opportunities to interact and engage with the Center as the nation's premier nexus of arts, learning, and culture. During the 2021-2022 season, the Center celebrates its 50th anniversary.