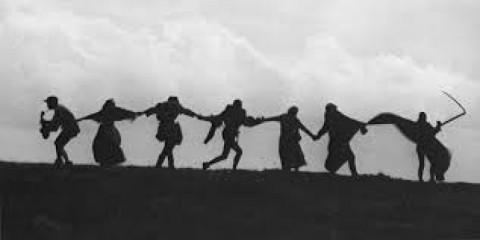 Looking Back 5 years ago on Thoughts of the Demise of Dance Criticism...

*Editor's Note: Cory Nakasue and I were asked by our colleague Eva Yaa Asantewaa to share our thoughts on her InfiniteBody blog on this "Sustainability in Dance?" Panel held five years ago at The Joyce Soho and arranged by Dance/NYC. I share this now because of the recent article entitled The Death of the American Dance Critic, published by the Atlantic Monthly. I was told I should comment on it and I guess that's the thing to do everytime a publication that is bigger than yours speaks?

Personally I am tired of hearing about dance criticism dying and would like to be involved in more projects to support writers of the dance. Any ideas?

What do you think has changed since 2010?

Instead of being overly concerned with dance criticism, and the role of the "expert" critic, I am interested dance communication--meaning other kinds of writing, in additon to criticism and creative media projects devised by the many experts in our field.  I am happy to see that more people are using video, and social media to talk about their dance works. I am delighted that dancers are featured communicators on forums like TedX. It would be wonderful if more funders, presenters, and administrators could be involved in supporting the work of writers, online or otherwise, who continue to slog away at writing about our art for little or no pay.  I am waiting to read my colleague Nia Austin Edwards interviews of voices left out of the dance conversation- which should be coming up soon on the Dance/USA website.

Christine:Being a mover first and foremost, and a writer second (even when I write I have to dance about to figure out what words to use) I am allergic to panel discussions. All that sitting. All that talking. I trudged to the Town Hall meeting in the manner of a gourmand forced to eat wheat germ --very earnestly, because it is good for me, and because it is the responsible thing to do.

Bottom line, when dance becomes necessary to the public, writers will be required to help audiences learn and make discerning choices. My glass half –full theory is that there are dance enthusiasts everywhere; they just don’t know it yet. The question is: how are we going to tell them? Dance artists have been playing with new technological toys to promote their work, so have traditional media providers such as The New York Times and National Public Radio. Now it is our turn as individual dance-writers and communicators to pitch in. Can we get some help from universities with dance programs and presenters please? TenduTV is an exciting venue, and with the internet: blogs, podcasts, live -streaming, and creative thinking, there are multiple opportunities to reach new audiences, expose them to dance, make them hungry for more, and then, hopefully, get them to drop some serious cash so we can all get paid.