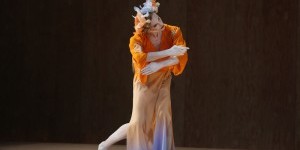 Impressions of the Chamber Dance/Opera "Hagoromo"

Conceived and directed by David Michalek

Wendy Whelan has been living in David Michalek’s head for the better part of five years. So has Jock Soto. As has Hagoromo, a classic piece of Japanese Noh theater. Whelan, who is married to Michalek, says, “My husband lives and breathes this work.”

Soon, audiences will have a chance to see what’s been keeping Michalek, a photographer and videographer, so preoccupied. Hagoromo makes it debut at BAM’s Harvey Theater with a veritable constellation of who’s who in the performing arts. Conceived of and directed by Michalek, this dance-chamber opera headlines Whelan and Soto, both former principal dancers with New York City Ballet. It features choreography by David Neumann, a Bessie-award winner known for his absorbing dance-theater works. Chris M. Green oversees the puppets and puppeteers, a group of individuals Whelan calls “profound.” The International Contemporary Ensemble and the Brooklyn Youth Chorus will perform music composed by Nathan Davis. The star power assembled is dazzling.

Whelan plays an angel who loses her hagoromo, a talismanic garment that confers magical powers. A lowly fisherman (Soto) chances upon it. Recognizing its potential, he can’t resist exhibiting it in a get-rich-quick type of scheme. The angel pleads with him to return her hagoromo; without it, she will die. The fisherman relents but insists the angel give him something in return: a celestial dance. While the original Noh performance dates to the 16th century, the moral implications of art clashing with commerce give Hagoromo a decidedly contemporary slant.

Noh has held a vaunted place in Japan since the 14th century. It boasts codified gestures and stylized gaits. Whelan says, “I’ve been practicing a lot of walking!” Performances unfold on an austere, wingless wooden stage. While Noh exists in Japan as a traditional, systemized enterprise, many Westerners — from playwrights Thornton Wilder and Eugene O’Neill to composers David Byrne and Benjamin Britten — have taken inspiration from its aesthetic to forge something wholly new.

The seed for Hagoromo was planted during the Japanese tea ceremonies Michalek attended in Los Angeles. Rigorously performative, these ceremonies emphasize ritual, precision, and extraordinary refinement, elements that can expose the deep, complex power of subtlety.

Whelan describes Neumann’s choreography as “linear” and “architectural” with a gentle Merce Cunningham quality. The tempo strolls rather than bounds with Davis’ score providing forward momentum. Whelan admits that she had some early trepidation when confronted by the measured movement. “In the beginning, I was scared. Would I be able to bring the right energy?” she says. But, as she discovered, the unhurried pacing allowed her to fine tune and highlight details.

The possibility of deliberateness has intrigued Michalek since his “Slow Dancing,” an art installation consisting of 43 large-scale video portraits of diverse movement artists. Unfolding like a dream — leisurely, but with an urgent undercurrent, the performers execute a step or brief phrase to riveting results. Whelan says there can be a “dread” associated with slowness, particularly in our hyper world buzzing with caffeinated busyness and instant notifications. Slowing down, though, can open up an experience replete with rewards: more to see, more to feel, more to remember.

When Michalek conceived of Hagoromo, he couldn’t imagine anyone but Whelan and Soto (Whelan’s longtime dance partner) as the leads. Soto retired in 2005, and this marks his return to a major stage. “I think Jock wanted the challenge,” Whelan says. “He wanted to re-find his body.” She adds it’s been inspiring to observe Neumann (whom she describes as “goddamn hilarious”) reinvigorate Soto. As for Whelan, she’s always had cameos in her husband’s work, but this is like a “gift” from him to her. “I want to do a good job,” she says.

When translated from Japanese to English, Noh means skill or talent. By sharing their prodigious skills and collaborating with each another, Whelan says, “We are bringing our talents to this spare, wooden stage in the most crystal clear way.”