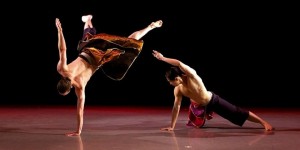 Published on April 20, 2014
Dancing on the Front Porch of Heaven /Photo by Rachel Neville

Chyrstyn Fentroy, was born and raised in Los Angeles, California, where she trained with her ballet dancer mother,   Ruth Fentroy, until the age of 17. She then moved to New York City after being offered a scholarship to the Joffrey Ballet School trainee program. Chrystyn grew up hearing about the famous Dance Theatre of Harlem and when they held auditions a year and a half ago she attended and was chosen to dance for the company.

Keith Saunders ,60, a native of Baltimore, Maryland, began dancing in 1971 while a freshman at Harvard University. He began his ballet training in1973 at the National Center for Afro-American Artists in Dorchester, Massachusetts.  As a principal dancer with DTH Saunders performed a wide range of roles throughout the company’s repertoire for more than 17 years. He was appointed Dance Theatre of Harlem's assistant ballet master in 1994 and ballet master in 1996.

Christine Jowers for The Dance Enthusiast: How long have you been with the Dance Theatre of Harlem?

Chrystyn Fentroy: This is my second season with the company. I have been dancing here for a year and a half.

TDE: DTH performs classical ballet and contemporary repertory, do you have a favorite style ? Is there something you are looking forward to performing this season?

Fentroy: In general I don’t have a favorite movement style, I just like to move. But for this season in particular I’d have to say that one of my favorite pieces is Dancing on the Front Porch of Heaven by Ulysses Dove. It is not only challenging technically, but the piece gets inside of you. It is overwhelming as a dancer to be a part of something so powerful.

TDE:I understand that Dove created this work during a period where thirteen friends and relatives, people who were close to him passed away.

Fentroy: You can feel that weight definitely.

Saunders: I’m excited to have participated in our new production of Pas de Dix in Tribute to Freddy Franklin. Freddy was one of the great ballet masters, of course, of the 20th and 21st centuries, and had a long association with Dance Theater. We worked with him on many ballets. I was in the original production of Pas de Dix ,which he staged for Dance Theatre in the early 1980’s. I’ve been very happy along with Virginia (Johnson,artistic director or DTH) and Kelly (Saunders, Keith’s wife) to re- stage this for our current dancers.

TDE: Why is Dance Theatre of Harlem important?

Saunders: The question that has been asked and continues to be asked every five or ten years: “Where are the black swans?” You know, that question. Diversity in ballet? Dance Theatre is important. Even now in 2014, Dance Theatre is largely the only  predominately African-American, truely multi-racial, multi-national ballet company in the country and in the world. Dance Theatre was of course founded to give young people in the Harlem Community an opportunity and access to study and excel in the arts, particularly in ballet. And that founding idea is also still necessary in 2014.

TDE: When you were coming up as a young man in the the ballet world, did you come across obstacles because of the color of your skin?

Saunders: No, I did not, but that was because Dance Theatre of Harlem existed.

TDE: What have you learned from being associated with DTH?

Fentroy: I am inspired by the people around me, my peers, and I look up to Ashley Murphy, for all she has accomplished, and to Virginia Johnson, our artistic director. She (Johnson )has had an amazing career and she knows what she’s talking about when she gives corrections or speaks about a piece. She knows what she’s looking for and what an audience wants to see, and she gives me insight that I have never received from any other director. She makes you think deeply and that’s helping me develop as an artist. She shares different ideas of approaching movement, for example, “Why don’t you imagine you are dipping your foot into water rather than placing it in tendu?“

Saunders: Maybe because I started so late, I pursued dance very vigorously. I loved it. I discovered my destiny when I started dancing. I kept wanting to get better. I was lucky to be hired by Dance Theatre and through my association with Dance Theatre have grown as an individual and an artist and have seen many parts of the world that maybe I wouldn’t have seen if I had chosen another career.

TDE :After all this time Mr. Saunders, is this work still fun for you? Do you miss being on stage?

Saunders: It’s fine not being on stage anymore. It’s fine. Last summer I turned 60 years old and you know what I miss now that I don’t take class anymore and I can’t do at 60, and retired for many years, what I did at 30 in my prime?  I miss being able to being able to show the movement in a more full and complete way.  But it remains fun. I have been on the road with Dance Theatre of Harlem for 30 plus years and yes, I still enjoy the touring and getting in the studio everyday working with the dancers.

TDE: You have been busy touring this season. What is it like touring with the company? Do you have favorite place?

Fentroy: We have been busy. I think touring is very exciting - something that I’ve always wanted to do.  You know, you’re a little girl and you see all these companies traveleing around the world and you just dream of being one of those people that can tour the world and show everybody what you can do and love to do.  Physically it’s exhausting of course. You’re performing a lot in a short amount of time, but its absolutely worth it in the end.

Fentroy: We just came back from Honduras and that was the most amazing audiences I’ve ever felt - so warm. The performances were open ones--free to the public. The people there don’t get to see ballet very often. They screamed and yelled and cheered. Kids that performed with us cried when we finished because they wanted to stay with our company.  A young girl came up to me -- she was the first person that has ever come up to tell me that I was her favorite dancer.  I couldn’t stop crying. Ever since I decided that dancing is what I wanted to do, all I wanted was to mean something to somebody.  I gave her my pointe shoes.

DTH Young Students in Rehearsal for Robert Garland's Gloria
Follow @ChristineJowers on Twitter
For More Information on The Dance Theatre of Harlem: Visit the Company Website