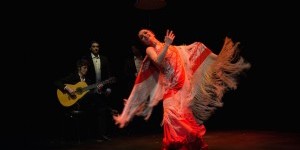 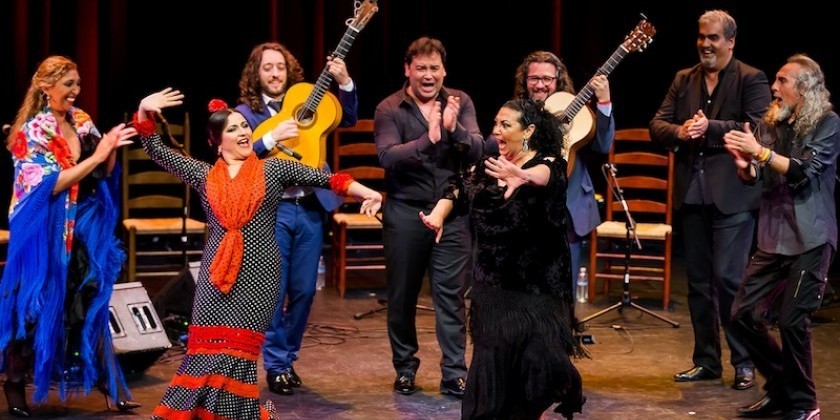 The line that won the biggest applause, during flamenco diva Sara Baras’ new show Voces, belonged to the late singer Enrique Morente. “In flamenco there are no masters, there are only disciples,” Morente said, his taped speech cottony with the accent of his native Andalucía. Reacting spontaneously, the audience at New York City Center cheered.

The crowd’s response was puzzling, but also ultimately revealing. Hadn’t we gathered, on March 4, to watch a flamenco master---Baras---demonstrate her exceptional skills?  And didn’t Voces salute some of Spain’s all-time greats? Images of Baras’ artistic heroes, stenciled on scenery flats, formed a backdrop for the dancer and her ensemble. At various points, she called upon these icons to share their wisdom in recorded interviews (the “voices” of the title). We heard from Morente, and also from Paco de Lucía; Camarón de la Isla; Antonio Gades and Moraíto. Voces was hagiography, similar in its tone of love and respect to Savion Glover’s 2011 SoLe Sanctuary, where portraits of tap masters hung watchfully over the stage.

Flamenco remains an art of the people, however. Born into poverty, this genre is stubbornly egalitarian; and anyone can claim its rhythms and stylish gestures for herself in a moment of inspiration. This explains the crowd’s delighted response, as Morente’s “only disciples” remark seemed to recognize flamenco’s communal ownership. People who attend the theater expect virtuosity, but it will never do for a flamenco show to put on airs. For all its slick professionalism, Voces maintained a sober appearance. Its colors muted, the production relied on Baras’ costume changes, and on those cleverly rearranged flats to set the scene.

One might expect Baras to have learned something from the lineage of great women in flamenco, but curiously almost all the artists whose influence she acknowledged in Voces were men. Carmen Amaya, though mentioned in the printed program, didn’t have a “voice.” Yet Amaya, more than anyone, broke the stereotype that once confined women in tight, hour-glass dresses with heavy trains, and threatened to reduce their soulful art to eyelash-batting. When Baras emphasizes her powerful footwork; and when she dons trousers to dance the Farruca, which is traditionally a male showcase, she has Amaya to thank.

Yet Baras, unlike the incisive and uncompromising Rafaela Carrasco, doesn’t fully embrace the liberation of wearing men’s clothing. While making no attempt to conceal her strength, she still hopes to intrigue viewers with a more traditional and coquettish persona. Although the ensemble in Voces mixed men and women in equal number, the stenciled silhouettes in the background oddly suggested a second chorus of male admirers whose presence accentuated Baras’ femininity, just as a worshipful line of female backup dancers underscores the machismo of flamenco Pop star Joaquín Cortés.

In the "Taranto," Baras also tried to vary the program, shifting the emphasis from the blistering explosions in her heels to shawl-work, or to the graceful carriage of her arms. Yet in the "Farruca"---the crucial moment, when the scenery flats revolved encircling her with mirrors---she lost her nerve. Her feet were insistent as ever, hissing and spitting with sharply focused energy, but wearing a loose top that revealed her curves Baras had to press her arm against her breasts to keep them from jiggling; and she seemed distracted and underwhelmed, as if the obligation to look sexy were getting in the way of losing herself in the dance.

Baras was not at her best in the conflicted "Farruca," but in the more relaxed "Soleá por Bulerías" that concluded the solo portion of the evening. Here she was back in a dress, an emerald gown decorated with fringe that spun out on all sides when the dancer pirouetted making her figure blur dramatically. Best of all, however, was the freedom she gave herself to play, crouching, swerving and springing unexpectedly in new directions. Here her whole body came alive, and her technique became the servant of unfettered spirit. She was terrific.

The ensemble dancers were also excellent, their crisp footwork reflecting this star’s specialty; yet they were versatile enough to pull off a tongue-in-cheek skit inspired by the legendary heroine of Bizet’s opera Carmen. Baras’ partner, José Serrano, didn’t look convincing as a matador, but he recovered his dignity in a mournful Soleá. The fine musicians included guitarists Keko Baldomero and Andrés Martínez; with singers Rubio de Pruna, Israel Fernández and Miguel Rosendo. Two percussionists, Mañuel Munoz “Pájaro” and Antonio Suárez, were the only trendy additions to this pure flamenco jam.

This is the first year in more than a decade that New York City Center has not anchored the annual flamenco season in New York. Instead this spring the theater offered an eclectic Latin dance series called “A Bailar,” incorporating salsa and contemporary interpretations of the tango. Flamenco aficionados need not despair, however, as Spanish artists continue to tour here under other auspices. Robert Browning, the visionary past director of the World Music Institute, who launched the original New York Flamenco Festival in 2000, has emerged from retirement to present the kind of unvarnished, grass-roots performance that has always been his preference. (Miguel Marín, Browning’s sometime collaborator, is more interested in contemporary work.)

A highlight of this season—or any season—was the program dubbed Generations of Gypsy Flamenco, on March 20, at The Town Hall. Featuring dancers Concha Vargas, Pepe Torres and Gema Moneo, with guest singer Esperanza Fernández and the brilliant guitarist known as “El Perla,” this program offered warmth, intimacy and a welcome dose of flamenco realness. It assembled a connoisseur’s collection of Andalusian artists, born and bred, whose dedication to flamenco’s ancient traditions is giving them new life. In contrast to their more commercial counterparts, this group seemed faintly eccentric. Yet their small vanities---the brightly colored shawl; the two-tone shoes; the effusive hair---were endearing, and in inverse proportion to the enormity of their talent. After an opening segment that gave each dancer an opportunity to make an entrance and a quick impression, the program was divided into longer, more elaborate solos.

In her introductory number, Moneo made the “Toná/Martinete” curling and sensual, ending tilted backward in a voluptuous pose as if offering herself on a platter to the accompanying singer, (her uncle) Luis Moneo. Later, her "Bulerías por Soleá" was a stormy affair, with the dancer charging, bucking and twisting violently in a display of untamed spirit. Plastic combs went flying as Moneo tossed her thick hair, and, stamping, she ground these ornaments to pieces under her heels. She was a cyclone.

Torres made a shy, almost diffident entrance in the “Toná/Martinete,” looking hunched in his pin-stripe jacket as his skinny legs traced finicky patterns on the floor. His big number, “Soleá,” revealed a bolder temperament and his essential lightness. At first he held back, his movements suspended as he seemed to listen for clues in the music. But then he went flying. Springing up from a crouch and gliding as much as stamping across the stage, Torres danced on a cushion of air.

Vargas made the most powerful entrance, in her “Siguiriya.” Rushing in a straight line from the wings to center stage, she turned sharply to face the audience with both arms raised like a matador about to strike. As this opening suggested, Vargas is a no-nonsense artist who makes every movement count. A heavyset woman, she used her bulk to advantage in the later “Romance,” spreading herself wide, and then wider still, before rushing at the audience; or making her body undulate in a wave that seemed to crashl downward with pulverizing momentum. For all her precision and economy, Vargas sometimes had a wild look on her face, her mouth open and her tongue clicking against her teeth in a half-audible song.  Circling slowly and trailing an invisible cape in another image borrowed from the bull-ring, this musical performer astutely drew us all into her rhythm.  Dynamite!

As a counterpoint to the dancers’ rich physicality, the guest singer, Esperanza Fernández, gave a recital of traditional flamenco airs. She evoked the splendors of “El Albaicín,” the old Moorish neighborhood of Granada, in her opening “Granaína;” and she offered a melancholy gypsy lament (“¡Quien tiene celos no vive!”---“The jealous lover has no life!”) in the following “Malagueña,” concluding with “Tangos.” At her side, and plucking the strings of his guitar with breathtaking dexterity, sat the handsome young musician known as El Perla, intimately responsive to every quaver and caesura in the score.

Additional cast members included singer José Valencia, guitarist José Gálvez and percussionist Luis de la Tota, who called out his encouragement to the others.  A night of such exceptional artistry that it was hard, at the end, to tear myself away, Generations of Gypsy Flamenco created memories that will be precious keepsakes for those lucky enough to have attended.