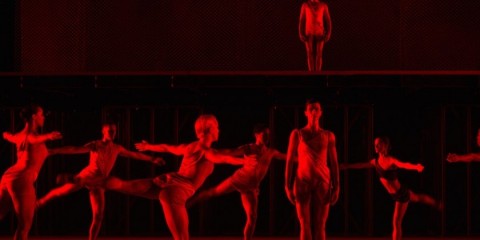 Presented as part of the Philadelphia 2015 Fringe Festival

Mesmerizing. That’s the word to describe the new production of Available Light, the 1983 collaboration between choreographer Lucinda Childs, composer John Adams, and architect Frank Gehry, revived in September as part of the 2015 Fringe Festival in Philadelphia. The incessant music and repetitive choreography held the audience entranced. Sometimes dance performances thrill us by showing us the amazing versatility of the human body. Here the wonder is in the patterns and forms the dancers create across the stage.

The production set is massive—an industrial display of steel cages with a raked second level backed by what looks like a huge metal screen. Its size is one reason Available Light has not often been performed since its creation for the opening of the Temporary Contemporary space at the Museum of Contemporary Art in Los Angeles. The challenge has been to make the dancers on the second tier visible to the audience. 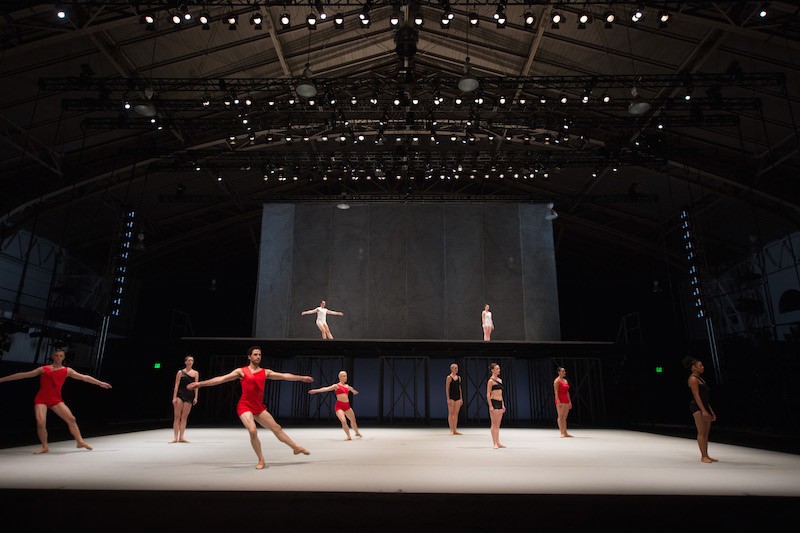 Amazingly, the dancers move without audible sound cues. Their movement drives itself. One pair of dancers begins a movement in unison, then another pair joins them in the same movement, and the first pair drops out. The movement changes. Then another pair joins, and another drops out, and the movement changes again and again. The steps are basic ballet, danced in soft slippers that almost give the sense of bare feet on the floor. The dance begins with eight dancers on the stage, two above. As it continues some descend while others ascend.

The music leads us into the dance and keeps us going. Our world is filled with electronic sounds so the style of John Adams’ score, which he calls "Light over Water", is no longer unfamiliar. Some of the music is almost lyrical. At other times,  it’s like an annoying cell phone that its owner won’t turn off. It builds and shifts, finally seducing us.

Although the piece is called Available Light, in reality it is artificially illuminated with deliberate shadows and tones. The warehouse setting makes the lighting equipment visible, as it fills the space beyond the stage with bright white, muted red or subdued colors.

In the essay “A Lexicon for Available Light,” which accompanies the program, Susan Sontag describes the dance as “Fifty-five minute work for eleven dancers (five women and six men).” Here there were four men and seven women, indicating the roles could be danced by anyone—the dancer is in service to the vision, not an individual. As these dancers move across the floor together, there is no apparent connection between them, no acknowledgement that anyone else is there. They take their cues from each other invisibly.

The piece was originally conceived for and performed in a converted industrial space. Between then and now it has only been performed on a traditional stage, if it was done at all. It took several years to bring this project to fruition in Philadelphia, one of the challenges being to find a space that could accommodate it, according to FringeArts Production Manager Derek Hachkowski.

The new costumes, designed by Kasia Maimone, retain the red, black, and white colors used by Ronaldus Shamask in 1983, but seem oddly dated. They resemble old-fashioned bathing suits crossed with a sash. The cut of the costume has the effect of truncating the dancers’ bodies making them seem oddly boxy.

Towards the end, I admit I drifted away a bit, and the dancers themselves seemed to lose focus and energy. That they kept the momentum going throughout the performance is a testament to their training and their discipline, and made for a compelling evening of dance.

The Dance Enthusiast in Philadelphia: Yin Yue and Trey McIntyre in Action with BalletX