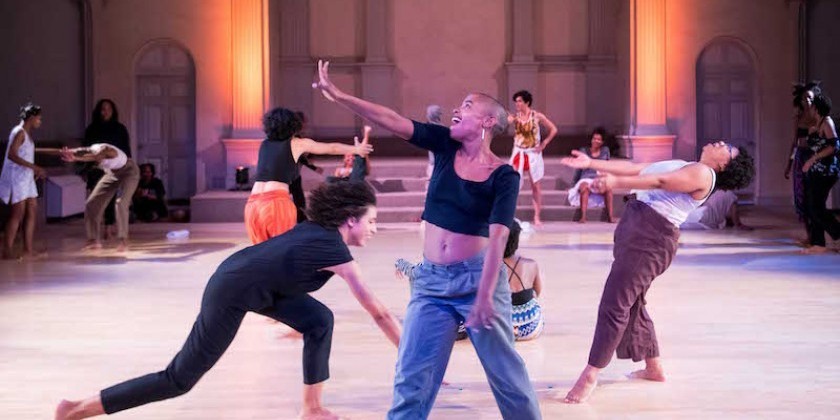 Eva Yaa Asantewaa's curated performance, skeleton architecture, or the future of our worlds, featured 20 Black women and gender-non-conforming performers plus musician Grace Osborne in a tremendous two-hour improvisation. The performance was part of Danspace Project's Platform 2016: Lost and Found, an effort to “interrogate the effects that deaths from AIDS in the 1980–90s in the downtown dance community has had on work, (queer work), being created today.”

Curators Will Rawls and Ishmael Houston-Jones told the packed house that their efforts to program the season resulted in a male-heavy lineup. To address the discrepancy, they asked Yaa Asantewaa to curate an evening. In the program notes, she wrote: “skeleton architecture, or the future of our worlds connects to Platform 2016: Lost and Found through rituals of healing within and beyond linear time and a desire to highlight the power of Black women within community.” She adds that St. Mark’s Church-in-the-Bowery will be a crossroads of “high-stakes risk as well as magic.” 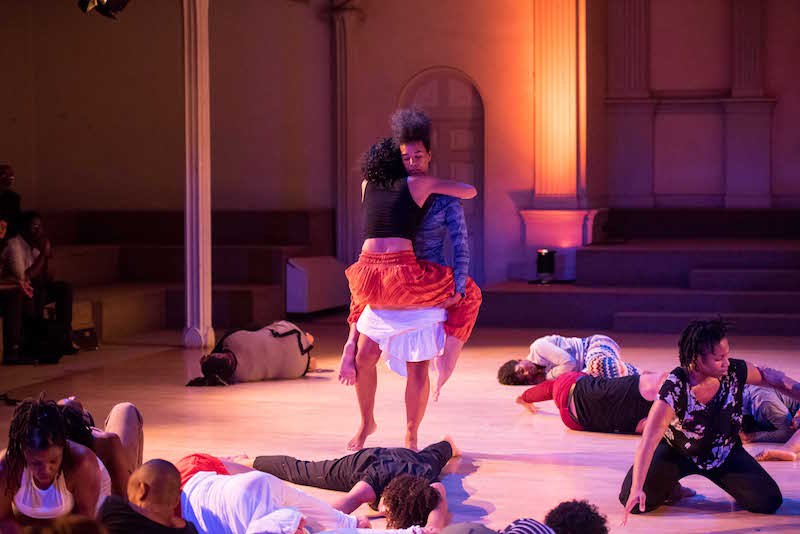 It's unusual for an evening-length performance to be comprised entirely of improvisation. skeleton architecture was so profoundly moving and complex that perhaps more choreographic evenings should be replaced with improvisation. Of course, much of the credit goes to Yaa Asantewaa for assembling such a balanced group of performers. But these dancers, be they skilled in street styles, contemporary, and/or African dance styles, performed with such clarity and vision that no choreographer could compose what evolved organically.

The dancers were invited to choose prompts from a basket: the walk, the sermon, the flood, the haunt, and the planting. Lined up on the steps of the altar, the performers approached the basket when they felt moved. They read a scrap of paper and started to improvise. In the beginning, many dancers moved individually, easing into their own body language and acclimating to the space. Eventually, shapes and a sense of composition began to form. 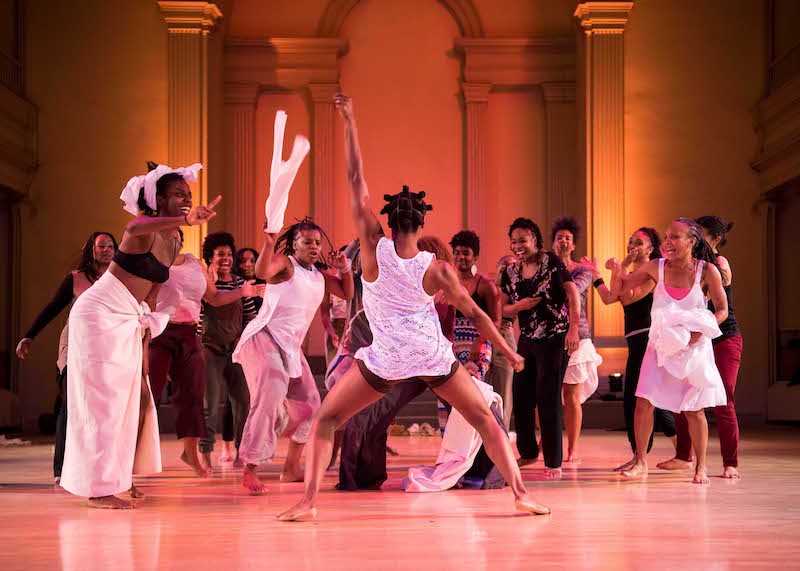 At one point, the inimitable Nia Love climbed up and over the shoulder of Maria Bauman (a powerful, calm presence), who shook her head “no” as Love straddled her face. As Love slipped from her perch, her dress rode up over her head. Bauman supported Love who leaned back, hissing and scoffing. When her dress was adjusted, Love repeatedly intoned, “You know me.” This moment indicated there would be no barriers onstage. Bauman's support was both sexual and sisterly, while Love's pronouncement was both furious and desirous. In mere seconds, the women had illuminated a chasm of taboo femininity.

Samantha Speis, who began the evening with her baby in a sling on her back, later took the floor in a memorable solo. She's a rare dancer whose improvisation is so seamlessly dynamic it appears choreographed.

Ultimately, most of the performers formed a line on top of the upstage steps, under the arch. They faced the wall holding each other around the waist or shoulders, swaying and stumbling. Charmaine Warren, standing on stage right, arched her head back and let out a strangled howl, like an injured animal. Writhing and twitching, she slowly crossed the stage, reiterating the phrase, “You're all I need to get by.” Under the arch, the dancers wailed and screamed, an amplification of Warren's torment. Then, their voices softened, and they turned away from the wall. Warren reached stage left and was embraced and lifted by her fellow dancers.

The mood swung wildly, from celebratory to somber to pensive, and everything in between. Yes, the dancers expressed heartache, as might be expected from a group of Black women during a ritual of healing. But joy consistently followed pain. No one in the room, audience included, dwelled on scenes of struggle once they were over. Our white-supremacist society expects Black women to be strong, able to bear the the emotional burdens of their communities. And they are able to do that, but they are infinitely more complex human beings who run risk of violence when they display their depths. That the mixed-race and mixed-gender audience was allowed, and even invited, to witness such a level of vulnerability demonstrated powerful confidence and the possibility for a different world.

The Dance Enthusiast Shares IMPRESSIONS/ our brand of review and Creates Conversation.

Check out our other IMPRESSIONS here.

Did you see this work or other evenings of Danspace Project's Platform 2016: Lost and Found? Share your thoughts in our Audience Review section.