IMPRESSIONS: Constance DeJong and Tony Oursler's 1988 "Relatives" at The Kitchen 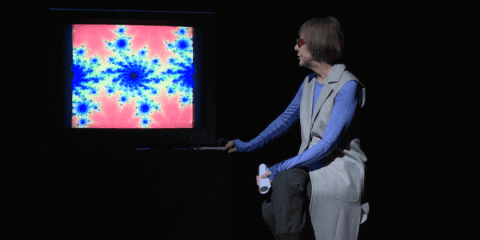 Approximately thirty years after its first showing at The Kitchen, Constance DeJong and Tony Oursler revive Relatives, a performance piece positioning DeJong in continuous dialogue with the audience and a blocky television set. The re-staging of this work offers a retrospective of visual technology and nods with reverence to DeJong and Oursler’s artistic partnership.

Since the 1970s, DeJong has been producing fictional, language-and-image based work and installations, while Oursler’s artistic portfolio celebrates his use of video, sculpture, performance, and new media. Their creation, Relatives, choreographs the English language in a tango of words and visual accoutrements.

To begin, DeJong sits casually on a stool next to a square, old-school TV and delivers a monologue with little modulation. Imagine: a college lecturer merged with Joy of Painting 20th century public television host (and 21st century internet sensation), Bob Ross.

Constance DeJong and Tony Oursler's Relatives at the The Kitchen

She traces the lineage of a fictional family as they interact with visual technology, offering each generation’s unique perspective, starting with a distant relative, who allegedly appears in Albert Pinkham Ryder’s 1896 painting Constance, and ending with a cousin who formulates numerical signatures for family members using computer code. Somewhere in between we meet a grandmother appearing as an extra in the Elizabeth Taylor version of Cleopatra; an uncle’s hand puppet gabbing away on a 1960's Saturday morning show; and an aunt specializing in female Kung-fu voiceovers for 1987’s Shaolin Challenges’ Ninja.

With each memory, DeJong adjusts her proximity to the TV, floating next to, behind, and in front of the illuminated screen. She checks in periodically with Oursler’s moving images, pointing to tiny pixels on the screen or instructing some entity offstage to rewind footage for clarity.

Constance DeJong and Tony Oursler's Relatives at the The Kitchen

With a gentle graze of her straight bangs, DeJong pulls a folded piece of paper from her light grey vest pocket to read a starlet’s letter back home. She hosts conversations with her uncle’s hand puppet by inserting dialogue during his deliberate moments of silence. She offers a variety of voiceover script options during her aunt’s Kung-Fu movie, or reminisces about family road trips to Ohio.

Relatives requires time to digest. It is a performance that mimics a lecture presentation. Audiences are invited to sift through language, imagery, and metaphor to consider the relevance of a 1988 revival with today’s lens. Is it purely nostalgic for The Kitchen’s programming or a comment on how far technology has come? Perhaps, a bit of both.

DeJong and Oursler successfully capture humanity’s unique relationship to visual technology by cleverly suspending it in a 1980s technological time capsule. Whereas now we may argue that we are controlled by technology, DeJong and Oursler reference a time when we were more in conversation with technology. Witnessing the work in 2018, we can reflect on how technology continues to evolve and imagine how Relatives would approach familial relationships today with smaller microchips, TV on demand, and of course smartphones.

Impressions of: "Slavic Goddesses — A Wreath of Ceremonies" by Artist Paulina Olowska with Ballez and Katy Pyle at The Kitchen