IMPRESSIONS: Sean Dorsey Dance's "The Missing Generation" at The Joyce 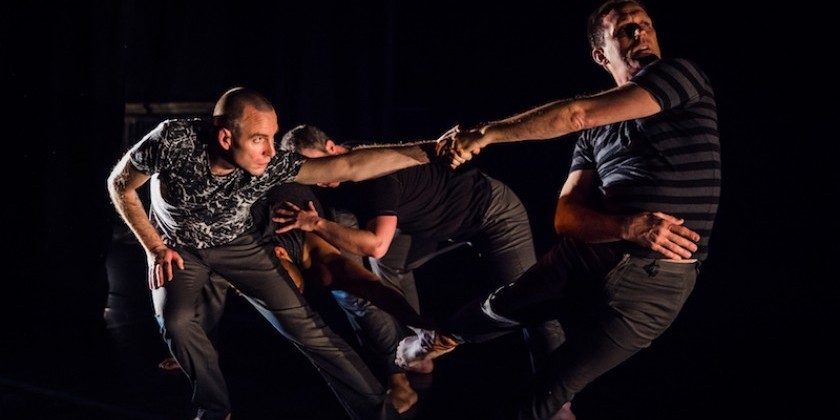 Choreographed and Written by Sean Dorsey

Pawing the air, choreographer Sean Dorsey begins his evening-length piece, The Missing Generation, with a nervous solo. Kneeling, he rubs the back of his neck like a man who has been carrying a burden. He’s in an awkward place, unwilling to forget what happened during the onset of the AIDS epidemic but still afraid to remember.

As terrible as the memories are, forgetting would be worse. “It took some memory erasure to keep going,” a nameless survivor confesses of that era in The Missing Generation. Yet casting all those absent friends and lovers into the black hole of oblivion would be a betrayal — like making them endure a second death. So Dorsey plunges ahead, opening the Joyce Theater’s celebration of LGBTQ Pride Week, on Wednesday, with a poignant and tender requiem for the fallen.

In The Missing Generation, Dorsey, a transgender artist whose company, Sean Dorsey Dance, is a mainstay of the San Francisco dance scene, processes and transforms the raw experiences of his subjects making it possible for us to gaze unflinchingly at sights no one ever asked to see. We hear their stories in voice-over, and can remember or imagine the young people prematurely aged, their bodies wasted and hooked to respirators. In the days when no one knew what was happening, or how AIDS spreads, a timid care-giver leaves a plate of food outside the door for a friend too ill to get out of bed. Some people attend hundreds of funerals. Impoverished transsexuals cast out by their families don’t have the luxury of funerals, however. Even their closest friends don’t know their real names; and one day they simply disappear. Many die of neglect. The disease travels with the speed of a conflagration, slaying people overnight and leaving the community a burnt-out shell.

Dorsey doesn’t try to depict it. Instead, he offers us the reassuring order of simple, clean dances with abruptly flung gestures and sharp outlines. Four men are all it takes. Dorsey plus Brian Fisher, ArVejon Jones and Nol Simonse form an intimate brotherhood whose movements allude to the spoken text while leaving room for our imaginations. Isolation is a major theme — both the loneliness of small-town boys who dare not reveal their sexuality; and the loneliness of the dying, abandoned to their fate. The three other men surround Simonse, staring at him. When they spoon together in a line, he pulls back and turns away from the others. Later, the three men form a tight huddle while Simonse remains apart. The spooning sequence will recur later with a different outcome, Dorsey turning to Simonse with an open-handed gesture of apology.

At various points, the men weave a tense farandole, with someone trying to pull away. “We hold each other back from the brink of despair,” a survivor intones. After a monologue describing anonymous sex, Fisher stands motionless in a square of light his hands reaching out to touch the wall of an invisible bathroom stall that is figuratively a cage. Then Jones steps in to offer him a healing embrace. Later all the men exchange partners, and one man’s hands dart around another man’s body as the choreography abstracts a sexual free-for-all set to a disco beat.

Along the way we also hear about the “Great Rainbow Migration,” a demographic explosion in which 35,000 gay men between the ages of 30-40 moved to San Francisco between 1975-1980. There they would create a utopian community for the queer and transgendered, as Frances FitzGerald relates in her book Cities on a Hill. “This is where we will learn about love,” Dorsey’s text has already explained. It feels bitterly ironic that the same conditions that granted these men their freedom would also empower a terrible disease.

Yet the creation of class consciousness among LGBTQ folk remains a powerful weapon against disease and oppression alike. At one point in The Missing Generation, the men stand apart from one another, each one despondent and apparently lost. By then, however, we already know what they have yet to learn. Epistemology can have a pelvic thrust; and the greatest secret they share is the ability to come together in love and solidarity.