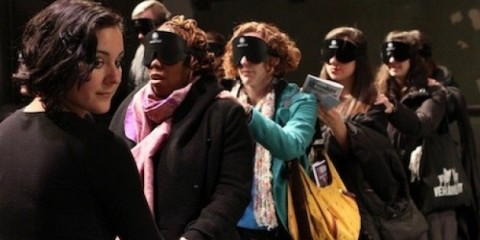 Blindfolded, I clutch the shoulders of the stranger in front of me as I fumble my way into the Irondale Theater. With lack of vision other senses light up and I become hyper-aware of enveloping sounds: feet shuffling, low voices and prolonged hissing noises, which seem just inches from my ear. I am led to my seat by a firm voice and a soft hand. As I sit down, I feel the rise and fall of a stranger's breath.
Fear and curiosity arise as I orient myself to the surroundings.I hear violent thuds, rhythmic clapping, short-spoken phrases, and more of that strange hissing. At one point, someone touches me, gently stroking my hair and neck. While my mind tries to decipher the real source of the sound, my imagination runs wild, transporting me to jungles, insane asylums, and other fantastical places.

What We Were Handed, presented by Dana Salisbury and Mari Meade Montoya, takes the audience outside of our bodies and places us in a bizarre and majestic dream world. The piece is presented in two portions: in the first half we are blindfolded, and during the second half, we are granted a visual experience.
The visual component of this piece contains a series of vignettes that weave their way through Dana Salisbury's set design, a veritable maze of two-liter bottles interwoven with circular wooden shapes - a life-sized honeycomb.
One striking vignettesees a solo performed by a corpse-like figure that has been lying motionless on center stage for some time.A manin a baggy nylon body suitbegins to violently seizure, his arms and legs flying every which way. (Did his thrashing create the thudding noise we heard earlier?) An intriguing trio populates another vignette - three odd women linked together by the wooden honeycomb-like circles. They resemble bizarre ostriches and accompany their movements with strange bird-like noises. Strangely, only at the very end of What We Were Handed do I notice a cellist who has been providing the eerie atmospheric music throughout.
I leave the theater feeling slightly disoriented and thoroughly affected, as if having just woken from a dream.

The second piece of the evening is an eccentric exploration created by Sari Nordman with the baffling titleA Dadaesque Collage of Chauvinist Wisdom.
This collage begins as playful duet that develops from minimal effort to wild exuberance. Two women (one of whom is the choreographer) in different colored dresses circle each other, twirling and leaping. Mischief ensues as the women exit then return carrying bright blue pillows. Like children at a sleepover, they explore the possibilities of their exciting props, tossing the pillows around the stage and at each other. The shenanigans result in a dizzying play-fight, finding the women alternatively dumping water on each other then shampooing their hair.
Nordman flirts with the wall between audience and performer as she grabs a mic and dryly cracks jokes, asking the audience to get involved. The duo brings their cell phones to the stage flashing their phone numbers in order that the audience can call their “hotlines” with jokes. While this skit is entertaining, it comes out of nowhere. Is this the nonsensical Dadaism referenced in her title or is it Nordman copping out and being random without an explanation?Is it Nordman’s intention for the women to appear silly and trivial? I am confused but, at the same time, I can’t look away.