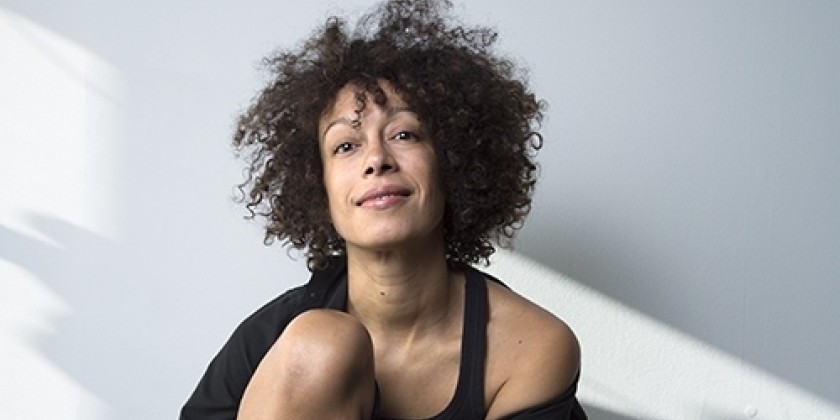 Co-presented as part of the Crossing the Line Festival, produced by the French Institute Alliance Française (FIAF)

Moving around in the world today, it’s difficult not to feel like one of those tiny, metallic balls in an arcade game —whacked.

How are you, by the way? Traveling on your own steam, or propelled by others’ comments, and crises? Walloped by the latest, craziest breaking news, or ready for a fistfight?

Well, this fall dance season three particular shows have given me the strength to deal with the daily barrage of 2019. The creators of these experiences need to be called out for their bravery, compassion, and artistry: Janis Brenner; Elizabeth Streb, the artists of STREB EXTREME ACTION, Anne Bogart, Charles Mee, SITI Company, and Stefanie Batten Bland and Company SBB.

Each of their distinctive performances acknowledges that despite our varied hues, backgrounds, and pronouns, we are commonly wrenched by love, loss, anger, and uncertainty. In fact, we need one another to get through life’s morass. These stellar artists remind us that facing reality with open-hearted courage is certainly worth the risk.

In the 1967 movie Guess Who’s Coming to Dinner, Spencer Tracy and Katharine Hepburn play Matt and Christina Drayton, a newspaper publisher, and his art-gallery-owner wife, well-to-do, white San Francisco liberals. When their love-struck, 23-year-old daughter "Joey" (Katharine Houghton) comes home from an 11-day Hawaiian vacation and announces she is going to marry a black man, they work to conceal their shock.

The intended is a handsome, older, widowed doctor with a list of honors and qualifications that would knock anybody’s socks off. Disarmingly gracious, Dr. John Prentice, Jr., (Sidney Poitier) is a man whose character is unimpeachable. Only an absolute bigot or complete idiot could dislike him. In other words, he’s probably the only black man that the US of America could deal with on celluloid in the 1960s. Dr. Prentice nobly refuses to marry the young Drayton if her parents object in any way.

Poitier is not the only unexpected visitor to the Drayton’s table. His parents (unaware of his fiancé’s skin color until the minute they’re picked up at the airport) are another surprise. Before anyone gets to eat, we get an earful from the people at the party: the parents, both sets; Tillie, the Drayton’s maid of 22 years (the film debut of Isabel Sanford); even a Monsignor, a golfing buddy of Mr. Drayton, is asked to dine and comment. All are concerned with the challenges that this interracial couple will face in a racist world.

Some fine acting happens in the passionate conversations and critical monologues delivered as the characters speak their truths. Eventually, and a bit too neatly, love wins, color doesn’t matter for the moment, and Billy Hill’s The Glory of Love happily swells, “…You've got to win a little, lose a little. Yes, and always have the blues a little. That's the story of, that's the glory of love…”

In Stefanie Batten Bland’s 2019 eloquent, elegant dance performance Look Who’s Coming to Dinner,  the handsome, multi-colored Company SBB (they look like they’ve plummeted from Vogue International to the stage of La MAMA) dance about race, gender, identity, and love while conversing with elements of the historic film. The choreographer and her expressive collaborators, all artists to be watched and followed, give us a great deal to think about and feel in this richly considered work.

Here, we are not guessing who is coming to dinner. The kids (probably the grandchildren, or great-grandchildren of marriage pioneers, like the fictional Dr. Prentice and Joanna) are already at the table, or just nearby.

Company SBB Outdoors and at The Table, a publicity still for Look Who's Coming to Dinner; Photo by JC Dhien

Yet as the new generation knocks at the door, hangs in the living room, and dines in the world 52 years after 1967, they don’t appear secure. Has life improved? Do relationships make more sense? While free and fluid to be anything they’d like to be, they don’t always choose to be kind to each other.

Batten Bland plays with identity from the get-go. We meet the performers as we take our seats in the theater with the house lights up. They mingle among the audience, making light, passing out programs. Their faces are friendly, open, welcoming.

Not that I don’t enjoy the banter, but I begin to wonder if the show is ever going to start. Dancers can talk for days. As the evening proceeds, I come to appreciate Batten Bland’s easy introduction into the fluctuating, sometimes frightening, world of present-day communication.

When the performers finally make it on stage and face us, their open expressions shift, albeit subtly, becoming less real, almost mask-like. As they wave at us and smile, I wonder if can we trust their niceties?

Raphaël Cyril Segouin wonders the same in a potent solo towards the beginning of the piece. Earnestly extending his hand to meet an invisible someone, he soon appears unconfident of their intentions and withdraws. How is a man supposed to feel when he offers his presence, but no one is pleased to meet him?

Segouin’s rapid and furious explosion of push-ups and in-place running, combined with erratic, stunning jerked movements reveal his frustration as he wrestles with that question. We witness a deep need for someone to listen, if only they would.

In the beginning, the sets are put together to resemble a long banquet table reminiscent of the Last Supper. Later, they are used to represent open and shutting doors and tunnels. They are set up as mirrors, in which the dancers gaze while trying to figure themselves out. They adore what they see, and are shocked by the images. “Do I love it, or fight it?” is the question.

I see giant iPhones, the communicative tools designed to liberate us, which ironically often shut us off from our humanity and others’.  In a wonderful display of athleticism, Ryan Rouland Smith performs a solo in which he bounds over a table that looks like a smartphone standing on its side.

Turned upside down at one point, one of the tables represents a boat in a choppy sea. A couple stands atop it hoping not to sink. Only their friends can steady the craft so they won’t.

Unlike the film, where the closing scene finds everyone finally sitting to dine, in Look Who’s Coming to Dinner we meet up with mealtime scenarios that aren’t at all pleasant —dinner table devolutions.

Rachel Watson Jih comes to the party and no one wants to talk to her. Her peers don’t commit atrocious acts, per se, but they let her know she’s unwelcome by separating into smaller packs, turning their backs, and cackling. She might feel better if she was slapped in the face. At least in Guess Who's Coming to Dinner people had a clear idea  where they stood.

The dinner guests seated at this table bang at it: fist-pumping, hitting, demanding. Then, reaching across the surface towards someone possibly on the other side, they melt.  As some fall off their chairs, others walk around picking at their friends' body parts. Watching dancers lift their companion’s arms and legs picking as vultures might for meat, I feel sure autopsied bodies are treated with more humanity. The world can be brutal today.

Latra Ann Wilson of Company SBB in Look Who's Coming to Dinner ; Photo by Carlos Cardona

The scene shifts. Latra Ann Wilson, one of Batten Bland’s brilliant, long-term dancing collaborators, grooves confidently while singing to herself bits of Aretha Franklin’s Respect. We want to clap and dance along as she goes through her  joyful paces, moving to a divine inner beat.

“Tillie”, the maid, admonishes "Dr. Prentice" saying that she doesn’t want to see a “member of her own race getting above himself.”

Wilson hears this and shuts down. The groovin’ girl is replaced by a shell of a woman going through the motions of chores. Suddenly ashamed and empty she lies on the table for security, grasping it between her legs.

Paul Damian Hogan, the excellent musician in the downstage corner, surrounded by various keyboards and sound apparatus, approaches Billy Hill's The Glory of Love in a variety of ways. Sometimes the song tinkles and laughs cynically, reminding us  “Love’s glory isn’t all its cracked up to be.” After Wilson collapses, the tune is played as a slow dirge, as if at a funeral for the individual spirit.

An inner turmoil that we don’t see in the '60's film, but experience today, presides throughout Look Who’s Coming to Dinner. Is it the weight of unresolved history that holds the stage’s citizens back? Or is the pressure to declare an identity, acronym, or cohort so great, it baffles?

Rachel Watson Jih of Company SBB in Look Who's Coming to Dinner ; Photo by Carlos Cardona

It takes time, work, and yes, anger and pain, to become a complete person. Feeling good enough about one’s identity to love another and meet at any sort of table is challenging without a script (fairytale or otherwise). Yet, what can we do but show up with our hand extended?

This is how Batten Bland ends the evening, with a young, same-sex couple in the form of Annie Wang and Watson Ji reaching their arms towards us, ready to meet the world.

Click Here for PART 1 of  Three Shows That Have Helped Me Through Fall 2019: "INHERITANCE: A LITANY," "FALLING & LOVING"