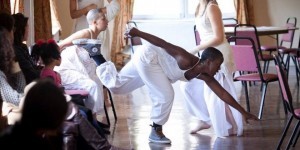 Anticipating the 3-Week Dance Festival
taking place throughout NYC from May 1-18, 2014

DANSE: A French-American Festival of Performance and Ideas is presented by the Cultural Services of the French Embassy in fond remembrance of the late dancer and choreographer Alain Buffard (1960-2013).

Cecilia Bengolea & François Chaignaud in “altered natives’ Say Yes to Another Excess – Twerk." Photo © Emilie Zeizig
Perform at The Kitchen from May 3-5.

The three-week festival spanning from May 1–18 includes fifteen U.S. premieres by France-based artists, a series of public talks highlighting issues crucially connected to contemporary dance today, as well as the release of two publications.

The participating artists were selected by the said organizations as an apt representation of what makes the current dance practice in France original and dynamic.

Pierre Rigal in “Micro.” Photo © Pierre Grosbois
Performance at The Joyce Theater from May 13-18.

“It is our hope that DANSE will be an important forum for dialogue on dance’s impactful place in contemporary life, and for continuing the historic artistic partnership between France and the U.S,” said Antonin Baudry, Cultural Counselor of the French Embassy.