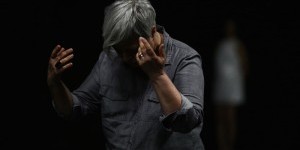 Celebrating the Thirtieth Season of the Performance Mix Festival (Part I)

Karen Bernard will present her new interdisciplinary work, Lakeside, this Thursday–Saturday, February 6–8 at 8pm at the Salon/Douglas Dunn Studio, 541 Broadway (between Prince and Spring Streets), in Manhattan, following creative residencies at L'Annexe-A in Quebec and Foundation Obras in Portugal.

Can you describe a particularly poetic period of your life?

Karen Bernard: The most poetic periods of my life I cannot share as they are illicit and sexual. I can however describe the 116th (or so) poetic experience. I create work by associating strings of events. In Lakeside, I was influenced by serving on a Grand Jury for a month.  Prosecutors gave evidence on several serious narcotics charges. There was a lot of repetition of facts presented in a dry, matter-of-fact manner. It was really boring and it became harder and harder for me to stay awake. This was real. It wasn’t a movie. Reality and fiction blurred, and “crossed the line.” Those words started to enter the work.

Karen Bernard: Lakeside actually began at L'Annexe-A in Quebec, and I would like to describe these residencies beyond a day, because a residency is really its totality — how the ideas associate, how the work builds from day to day. This is a poetic experience.

L'Annexe-A is the home of Audree Juteau and her husband, situated in a rural area along Lac Bellecombe, a lake that is 18 miles long. I stayed in a guest room and Lisa Parra, my long-time collaborator, stayed in a cabin on the property. The studio was a converted garage with a screened tent over the doors. The view looking out through the screen became a moving background to create the setting for the outside location of the first scene.

Throughout our 10 days I took turns cooking with Lisa, Audree, and her husband. I learned how to make no-knead bread and now I am obsessed. It was very intimate. Often Lisa would go for a run in the morning. Sometimes we would food shopping in town or visit a farmer’s market. We would rehearse at different times of the day. I would sometimes go to the studio alone to work out ideas and then Lisa would join me. Audree took some wonderful photos of us and videotaped our final workshop run of the piece. The simplicity of the lifestyle, the days rolling by with the changing colors of the lake, and Lisa keeping me at a steady pace gave me space to think. One of Lisa’s great gifts: She is never in a hurry!

Obras Foundation is an amazing place. The hosts Ludger and Carolien truly care about the artists. They build and supply the resources to support your work, whether through artists’ talks and shared meals or finding the right studio or site-specific outdoor or indoor space.

A day there might include a quiet coffee outside, just thinking, a swim in the pool, a walk to the pig farm, trying to find internet, back to the studio, back to your apartment for lunch, going to the quarry, food shopping, buying cheap wine, hanging out with the other artists, going into town, attending an event, heading back to the studio, or just thinking, thinking, thinking. And, at the end of your residency, you share your work with friends at Obras.

It was interesting how I came to find the work/performance spaces for Poolside and Lakeside at Obras. My proposal for the first year at Obras was to use a small outdoor space. I was provided with a huge empty water-holding tank made of cement, but there were too many mosquitoes at night. I wound up using a large courtyard with a whitewashed building behind me. I created a projection utilizing different images including scenes that took place at the pool. My live performance in front of the large video was quite cinematic — but by the end of the residency the temperature had dropped to 50 degrees Fahrenheit and it was very windy. So there I was in my bathing suit in the cold and wind! It made the piece a tour de force at the time of the performance. The live solo/video/installation of Lakeside included excavated video footage of Lisa (since I couldn’t bring her to Obras) and was staged in a cavernous studio over 2,700 square feet in size. I almost didn’t get that studio, but Ludger successfully negotiated with another artist.

In these works, Lakeside and Poolside, water and landscapes of the country, the daily life tasks, the relationships with the people there, the very specific sonic landscape of Obras, the foreign intrigue of the country, all seep into the work, becoming gestural movement, video imagery, bits of conversations both natural and recorded, and spacial situation set-ups.

Throughout the development of these works I worked in close collaboration with digital composer Boris Billier. I saw an outdoor sound installation of his work well over two decades ago in Montreal along the St. Lawrence River and met him briefly. Since then we have worked remotely via internet. I have never met with him in person since that time.

Are the different bodies of water in Poolside and Lakeside symbolic of separate matters?

Karen Bernard: In Poolside, the water became a place to play, to experience the joy of my body in repose. The bathing suit, with its vintage feel and bright colors, conjured notions of glamour, memory, and the passage of time. As both subject and author, I used video to explore ways to juxtapose being seen and seeing. When I performed at Obras, I projected Poolside's images on the large white wall while I performed in front of the images, as a way of being both within and outside of time. Memory and the way the body experiences the passage of time is a recurring theme in my recent work.

In Lakeside, water again represents leisure, but this time with an outdoor scene that has gone very wrong. We imagine man, nature, and the hunt. Who are these beings inhabiting bodies that will share their victims’ experience?

Poolside saw you sporting a bathing suit and sunglasses whereas Lakeside revolves around a yellow and black dress that reminds me of Uma Thurman’s jumpsuit in Kill Bill. What’s the story behind this bespoke garment?

Karen Bernard: The yellow and black taffeta dress was made for me by a young designer in the early 1980s. I think of it as a Bauhaus-constructed cheerleader uniform. It no longer fits me, so I began to think of it as a missing body— and yet it fits Lisa Parra, my younger self. Who was the missing body? And so, it began. I watched a wide range of films from Kill Bill to when Harry Met Sally. Lisa’s solo was influenced by the Beyoncé movie Homecoming. I loved it. Wow what a body, what charisma, and great staging. What I found out was that she stole the movement from choreographer Anne Teresa de Keersmaeker. So, I decided to steal from Beyoncé. Lisa ran with it to the digital sound of Boris Billier, breaking the movement up, repeating, and standing up against the violence.

Both Poolside and Lakeside are explorations of (wo)man’s capacity for memories, whether good or bad. In a nutshell, what have you found out from your research?

Karen Bernard: In Poolside, I found that by playing with darkness and light, I could create a sense of past and present, and used that by going inside and out through a doorway in the piece. I have also found that by using video, you are in the past. In Poolside, close-ups of different parts of my body created a feeling of raw vulnerability, representing past time versus myself performing live in real-time.

In Lakeside, Lisa and I played with memory as we are often not together at the same moment in time. There is a section of the piece where she uses a flashlight to shed light on me to bring attention to a past event.

As a video-dance artist, would performing without filming feel incomplete?

Karen Bernard: I worked for decades as a soloist without video. Now I use video in varying degrees. I do enjoy accessing this visual art element for my work. Poolside is a 20-minute video which I walk into for 6 minutes and perform live. I challenged myself to use video more sparsely for Lakeside. Lakeside is 40 minutes and I have two short videos: one that's 7 minutes long and another lasting about 4 minutes. Each one provides a cinematic backdrop.

People often come down hard on table manners, but theatre politeness isn’t brought up nearly enough. What do you request of your audience other than to enjoy themselves?

Karen Bernard: I would like them to be curious and to make their own interpretations. If they want to change their view, they can change their seat. I really am not interested in audience participation, but as an audience member, I do not like to have to sit and view a performance from one vantage point. I would like to give my audience permission to experience not only different vantage points, but physical and psychological perceptions of what Lakeside explores.