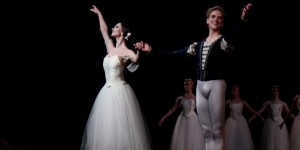 The Dance Enthusiast Asks David Hallberg About Dancing for The Bolshoi

An American in Russia

During the height of the Cold War the defections of ballet dancers such as Rudolph Nureyev, Natalia Makarova, and Mikhail Baryshnikov rocked the dance world and defined the political tensions between the United States and Russia. Three decades later the relationship between the two countries remains precarious, but on an artistic level things have changed.

The Dance Enthusiast had a opportunity to speak with David at a recent event hosted by the Russian-American Foundation in celebration of June’s 12th Annual Russian Heritage Month.

Stacey Menchel Kussell for the The Dance Enthusiast: How exactly did the opportunity to dance at the Bolshoi come to be?

David Hallberg:  It happened somewhat unexpectedly. It really was the doing of Sergei Filin [former director of the Bolshoi who suffered an acid attack in 2013]. I had been dancing as a guest artist at several galas in Russia, I got to know him, and simultaneously the Russian ballet community started to get more acquainted with my work. After that it all fell into place.

TDE: What have you learned since working at the Bolshoi? How has it pushed you as an artist? What has been challenging?

DH: The experience being part of Russian ballet culture has been really eye-opening for me. Ballet has such a rich heritage in Russia and it is also a major part of popular culture. Being part of that tradition has been humbling and really motivating. I feel that I’ve been welcomed by the company, but the beginning was challenging – I imagine it always is moving to a new country. The weather was harsh. It took a while to learn the language and the customs. But over time, I developed friendships and built a community there.

TDE: What has been the most exciting repertory that you’ve danced at Bolshoi?

DH: The big story ballets are always really exciting and this season’s presentations are no exception. I also really enjoy the work of Pierre Lacotte, a French choreographer who has created ballets for Bolshoi. His sensibility works really well with the Bolshoi style.

TDE: The fact that you are the first American premier danseur of the Bolshoi has been groundbreaking not only in the ballet world but in the political world. What has that experience meant for you? What do you see for the future?

DH: The political climate has changed, and I think my inclusion in the company proves that talent is talent, and that it goes beyond nationality or borders. Russia has an amazing history and prominence in the ballet world. Filin wanted me to be a part of that tradition. His openness to change, I think will bring positive things for the future.