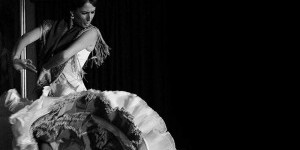 Impressions From The Kennedy Center- PostClassical Ensemble --"Iberian Mystics: The Confluence of Faiths"

Christine Jowers for The Dance Enthusiast: Dana, thank you for sharing this touching film of Micho Ito's Ave Maria, your tribute to Ruth Bader Ginsburg, beautifully danced by Christin Arthur.

Can you tell us a bit about your connection to the work of Michio Ito?

Dana Tai Soon Burgess: I studied the Michio Ito technique in the early 90's and was given the solos by one of his second generation proteges. I studied and was coached by two of his original students, one who danced for Ito in California and one who danced with him in Japan. From the technique I learned much about musicality and choreography because the work is steeped in his studies with Dalcroze in Hellerau. Christin Arthur performs an exacting and sublime rendition of this signature solo.

What are the challenges and joys of setting and dancing this particular piece?

DTSB: Ave Maria from 1914 was Ito's graduation solo from the Dalcroze School. It  embodies his technique based on arm and gestural movements and includes what was called his "one arm lead," where gestures normally done with both arms are done in canon of one another singularly.

The look of simplicity is actually quite misleading because to do the solo one has to have extreme control and musicality while embodying the emotional state of religious piety.

I am interested in your unique choreographic relationship with the Smithsonian Institution. Can you tell our readers more about it?

DTSB: I am the first ever choreographer-in-residence for the Smithsonian Institution, a title that was created for me. I am based at the National Portrait Gallery where I choose exhibits and portraits to be inspired by. There I work with historians and curators to research the works I am interested in and, on my company, I create modern dances that speak to American diversity.

My works are performed at the National Portrait Gallery in the Kogod Courtyard, in the galleries, and at the museum's McEvoy Auditorium. Once the works premiere there ,we tour them and include them in our Kennedy Center season.

Tell us more about your upcoming by-invitation-only concert at the Kennedy Center. You are giving this specifically to first responders. I am sure they will be thrilled to attend. Is this your first live audience in a while? Have you been rehearsing "live" with your company? How has this been for all of you?

DTSB: The upcoming performances are for an invited audience of first-responder health workers who have been working tirelessly during the pandemic. It is our first live performance after months of lockdown. We have been working with the Kennedy Center Covid team to ensure audience and performer safety. Everyone, even the performers, are required to wear masks and socially distance.

The company has been taking class via Zoom and I have been rehearsing one dancer or two (who are in quarantine together) at the Arts Club of Washington which is located in the historic President Monroe mansion near the White House. They have a large music room and performance space as well as a new air system with viral filters. We will be performing at the Club out of doors on Oct. 9th and we are selling out.

It has been a challenge to not have the company all together at this time, but we feel blessed to have continued to work and pay our dancers. We are resilient and are prevailing and are dedicated to our dancers. My board is quite supportive and innovative in their thinking which has led to our ability to keep working at this time.

I have just completed a short  solo for Felipe Oyarzun, one of our dancers, based on Civil Right and Labor Rights icon Cesar Chavez.  That will be filmed at the Portrait Gallery in October and premiere in November. ( For more information click  Dana Tai Soon Burgess Dance Company.)  It's the first of several solos based on social justice leaders from the exhibit "A Struggle for Justice."

What practices have kept you sane during this time of pandemic, shutdown, distancing, and political unrest?

DTSB: Continuing to engage with our dancers has kept me sane. We are a close group and at the end of each Zoom company class we check in with each other.

What are you most grateful for at the moment?

DTSB:I am most grateful to the dancers who continue to work with such dedication to stay in shape, to stay engaged with their artform and the company at this time.

What has this time off taught you about yourself?  Have you discovered any new talents or skills or uncovered any old ones?

DTSB: My first training was Karate and recently I took a Karate class at a park nearby. I have been enjoying returning to the form. Also I have been deeply engrossed in writing a memoir which will debut next year.  Writing is like choreographing; it has overarching themes, symbols, an ebb and flow. I'm loving the process.

What do you dream of for the dance of the future?

DTSB: Dance is a field of mentorship. I truly believe that the dance flows through us, generation after generation. I dream that when we return to a new normal  I can do even more work to support young choreographers.

My dream is that at the end of this difficult time audiences and artists alike will be back with a vengeance for live performance.

DTSB: Mentors are an integral part of a dancer and choreographer's journey. Sometimes mentorship comes in the form of learning a technique and studying an artist's life. From studying the Michio Ito technique and continuing to keep his works alive I have learned much about choreographic structure, musicality, performance and also about the Asian-American diaspora of which I am part .

Ito was an important American modern dance pioneer who due to prejudice was almost wiped from our dance history, due to Executive Order 9066 which interned and deported Japanese-Americans. At this time Michio Ito reminds me of the potential dangers of Executive Orders and reinforces my belief that we all need to embrace, support and celebrate the diverse cultural perspectives that make up our American landscape.

Dana Tai Soon Burgess is a leading American choreographer and cultural figure. He has been  referred to as the “poet laureate of Washington dance” and “not only a Washington Prize, but a national dance treasure” (Washington Post Pulitzer Prize winning dance critic Sarah Kaufman).

His artistic focus explores the idea of cultural “confluence” and many of Burgess’ dances have tended to focus on the “hyphenated person” – someone who is of mixed ethnic or cultural heritage – as well as issues of belonging and societal acceptance.He has served as a cultural ambassador for the U.S. State Department for over two decades, an appointment he uses to promote international cultural dialogue through “the global language of dance”.

Throughout his career, Burgess has performed, taught, and choreographed around the world. He founded Dana Tai Soon Burgess Dance Company (DTSBDC.org) in 1992. It is the preeminent modern dance company in the Washington, D.C. region, now in its 28th season.

He was appointed the first ever Choreographer- in- Residence for the Smithsonian Institution in 2016 and is based at the National Portrait Gallery where he creates dances and public programs through dance based on their exhibitions.