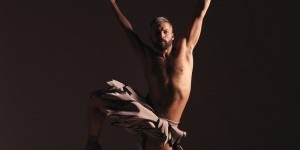 The show combines tap dance, jazz music, original poetry, and vocussion. This movement of percussion by using the body and voice follows a folk tradition. A tradition of rhythm making that folk artists originated through the body as the instrument and keeping the music alive.

For this performance, the ensemble stages free jazz and tap phrases in a mixture of jigging technique and polyrhythmic performances. This is the history of Jazz Tap Dance and looking back on traditions of Jazz music in Philadelphia. It goes thoroughly deep into American history more than anything. The cast involves artists in tap and a collaborative variation of musicians to present this multicultural art form. Featureing, Mark Allen, Tim Brey, Anwar Marshall, Madison Rast, Gina Accordino, and Rosie Marinelli, and Bethlehem Roberson.

In the dance studio, Pamela Hetherington and Bethlehem Roberson were in rehearsal. The duet had its moments of exploration, a mood which was rich in sentiment and emotion.  They were making music and expanding to the territory of rhythm and blues.

Recently, I have been capturing Pamela Hetherington tap dance at her dance studio, Sound Space Performance Studio. This was a refreshing welcome back to drawing live performances after a city wide shut down in Philadelphia. I walked into the artist studio on the second floor, over looking Girard College. Jazz tap dance contributes to a movement of stardom, and the disadvantaged and heartache connected to jazz music. This helps us to imagine a city like Philadelphia as we know it, and with the great jazz musicians that were here at that time. Only then were the dance halls filled with this kind of live music! This is truly about the legacy of Tyner and Timmons, two jazz musicians whom were in Philadelphia in 1950-60's. The choreography, melodies, and tap phrases point back to when Philadelphia was a destination for American tap dance and Jazz music.

The jazz music evolved with the tap dance, and I began to understand this by listening to the tap dance as body percussion, called vocussion. Bethlehem is an artist with a voice which inspires and  who is lyrically gifted. That day during the studio rehearsal, Bethlehem left us with the rhythm that would resolve half talk-and-murmurs during the show. Although the main body of the performance the artists are in sync, suddenly they break, and the artists abandon the melody and present an individual sound during this pause. This was the most fascinating break,  the improvisation of breaking down not only breaks down the unison of the performance, but like a kind of break dance of a contemporary era, like none other than the Hard Bop style. One thing about the music and dance Hetherington mentioned is the transcendence of great jazz. There certainly was a sense of timeless contemplation for both the music and the dance. The sun bursts through the windows, the repetitive tapping, and breaking enhanced their work flow.

This is not a greatest hits of McCoy Tyner and Bobby Timmons concert, revoked Hetherington. The program is in five parts, it is lyrical, dramatic, and genre scene which becomes an integral part to understanding this art form. From a historical point of view there is an appreciation for jazz, but tap dance has many forms, and Philadelphia Jazz Tap Ensemble brings music that has not yet been recorded with tap dance. This inevitably creates new dialogues with Jazz music. "You should listen to Baby Laurence, if you want to hear tap dance." instructed Hetherington.

There's a lot to say from Ragtime songs to Hollywood productions. The Bebop returned modern Jazz to the roots of its improvisers. As cultures collided with different tap techniques, we can look back into the history, and trace such artists like Tyner and Timmons back to Philadelphia where the jazz tap movement was active. Tyner would ultimately play piano in the John Coltrane Quartet. At the same time, Timmons played piano for Art Blakey and the Jazz Messengers.

This show is asking how do we find ourselves, and truly be ourselves. Its not about the big band, Broadway show, or entertainment, as much as it is about the medium. The body as the instrument shows a capacity to work on multiple levels of expression, and the key to this show is memory. Listen for the chorus, "You won't forget me, though you might try…," spoken word by Roberson. It is surely going to connect with a nostalgic and whimsical musical tapestry that will make you start tapping.

Tyner and Timmons were both in Philadelphia at one point, and with all the jazz musicians, it was also a homecoming for Timmons. They must have collided at some point because if you know Philadelphia and the way it is- It's a city where the inevitable happens.

Keep the Philadelphia Jazz Tap Ensemble in mind next month and see/ hear an exchange of kindled spirits ante up in Tyner and Timmons April 23-24. Limited in person tickets, or watch from home with PhillyCam, a public broadcasting network for the "Live Culture" hour program.

One Thing is Certain: a dance film