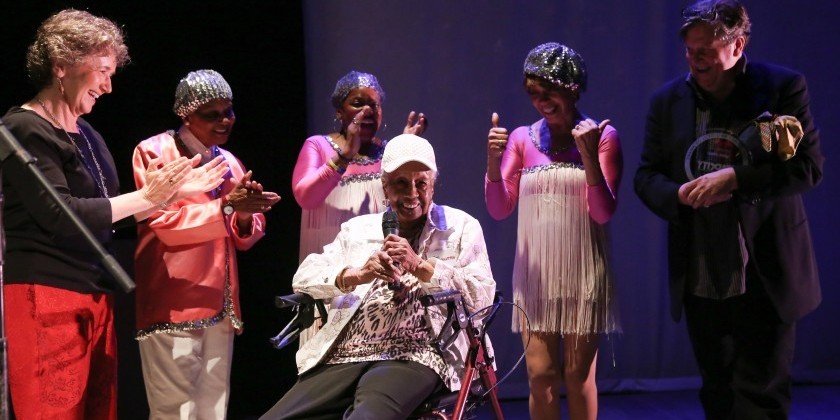 The American Tap Dance Foundation’s TAP DANCE AWARDS will be presented on Tuesday, July 10 at the Leonard Nimoy Thalia Theater, Symphony Space at 7pm.  The ceremony will honor winners of the organization’s Hoofer and Tap Preservation Awards and include inductions into the ATDF Tap Dance Hall of Fame. The awards evening, which will also offer film presentations and performances, is a featured event of “TAP CITY,” the weeklong celebration of tap dance returning to New York City for its 18th consecutive year (July 7 to 13).

Jared Grimes and Katherine Kramer are recipients of this year’s ATDF Hoofer Award, in recognition of their inspiration to future generations and contributions to the art form.

The 2018 Tap Preservation Award will be awarded to the late Leticia Jay for her role in advancing tap dance through presentation and preservation. The late Ralph Brown and The Tap Happenings are this year’s inductees into the ATDF Tap Dance Hall of Fame, the only Tap Dance Hall of Fame focused exclusively on 20th and 21st century professional tap dancers. With its collection of photographs, biographies, and videos, the ATDF Hall of Fame is a colorful and diverse retrospective of America's seminal tap dance personalities.

The Tap Dance Hall of Fame Award to the late Ralph Brown will include his tap choreography, reconstructed by an ensemble of dancers who worked with him firsthand, including Katherine Kramer and students. Rarely seen video footage of Mr. Brown will also be shown. The presentation of rare footage of the legendary hoofers in The Tap Happenings (1969 film), produced by Tap Preservation Award winner Leticia Jay, includes performances by Charles "Chuck" Green, Howard "Sandman" Sims, Lon Chaney, Rhythm Red and others.

A live jazz trio, with Jess Jurkovic on piano, Joe Fonda on bass, and Josh Davis on drums, will accompany the performances. The Hoofer Award/Katherine Kramer dance performance will also include Virginia Mayhew on saxophone and Kenneth Metzker on percussion.

TAP CITY, The New York City Tap Festival celebrates the American Tap Dance Foundation’s ongoing commitment to establish and legitimize tap dance as a vital component of American dance through creation, presentation, education and preservation. ATDF is in a unique position as both a promoter of the new and preserver of the living history of tap dance.

In July, the American Tap Dance Foundation will celebrate 32 years since its founding by tap master Charles “Honi” Coles, his protégée Brenda Bufalino, and the Foundation’s current artistic and executive director, Tony Waag.