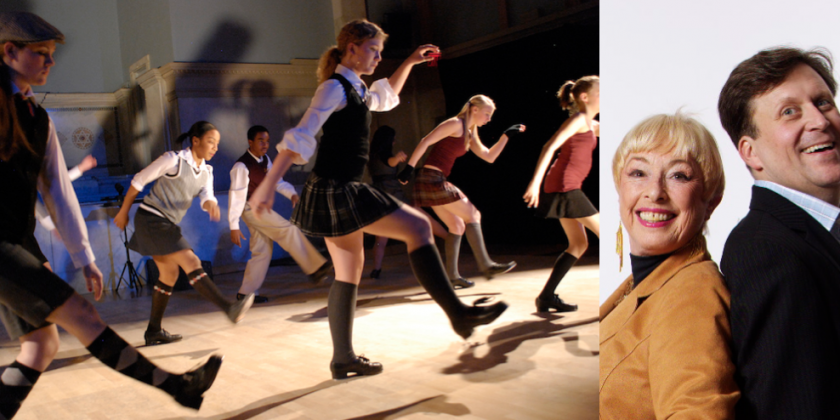 ATDF is a non-profit organization committed to establishing and legitimizing tap dance as a vital component of American dance through creation, presentation, education and preservation. The organization is in a unique position as both a promoter of the new and preserver of the living history of tap dance as an art form.

“There are many different styles of tap dance today, all valid and all incredibly interesting, complex and diverse,” says Tony Waag. “ Most people have no idea tap dance is practiced, presented and perfected all over the world. Though it was developed and incubated in lower Manhattan and born from a melting pot of cultures, it has now been embraced by tappers throughout the globe, from Australia to Brazil, Cuba, Germany, Japan, Spain and more.

Each spring, ATDF’S Rhythm in Motion concerts feature five days of performances which showcase the rich diversity of contemporary tap dance, with a combination of young and emerging talent as well as premier choreographers in the field. In addition, ATDF’s Tap City, ATDF’s weeklong tap celebration every July, includes film presentations, awards, master classes and performance events by international artists, drawing participants from around the world.

The December 8 Dance Magazine Awards will include performances and special guests, and a post-awards cocktail party.

ABOUT THE AMERICAN TAP DANCE FOUNDATION

ADTF was founded in 1986 by tap master Charles “Honi” Coles, his protégée Brenda Bufalino, and the Foundation’s current artistic and executive director, Tony Waag. Called the American Tap Dance Orchestra until 2001, the organization was directed and choreographed by Ms. Bufalino and presented hundreds of stage performances and films from 1986 through 1999. From 1989 to 1995, it also operated Woodpeckers Tap Dance Center, where tappers from all over the world gathered for classes, workshops, jam session and performances. In 2002 with a new generation of tap dancers and enthusiasts, the Orchestra was renamed under the artistic direction and leadership of Tony Waag.

TONY WAAG (Producer/Artistic/Executive Director/Teacher) founded the American Tap Dance Foundation (formerly known as the American Tap Dance Orchestra) in 1986, along with Brenda Bufalino and the late Charles "Honi" Coles. From 1989-1995, he co-created and operated, with Ms. Bufalino, Woodpeckers Tap Dance Center which became a model for numerous tap organizations and tap studios worldwide creating, producing, and presenting various educational programs for adults and children year-round, as well as annual winter tap intensives with master classes, courses and workshops taught by leading International artists and master tap dancers. I n 2001, he renamed the organization the American Tap Dance Foundation and created Tap City, the annual New York City Tap Festival with premiere performances of all styles of tap by artists from around the world, as well as an extensive training program for adults, teens and children, city wide events, tap jams, student showcases, panel discussions, lectures and film screenings. As a performer and choreographer, he has been featured in hundreds of concert, film and television productions including appearances at the legendary Apollo Theater, the Kennedy Center for the Performing Arts, the United Nations, the Atlanta Arts Festival, the Utah Arts Festival, the Colorado Dance Festival, the Lincoln Center "Out-of-Doors" Festival, the Jerry Lewis Labor Day Telethon, PBS’s "Great Performances, a national Seagram's commercial, and in a French car commercial for Renault in Paris. International appearances include USIA tours of Turkey, Poland, Cyprus, Latvia and Estonia, and recent American ambassador tours of Armenia and Romania with his production of Tap City on Tour. He has also taught and performed in Bermuda, Brazil, Canada, Germany, Italy, Russia, Scotland, Singapore, and Spain. Mr. Waag has received numerous grants towards the presentation and preservation of tap dance as a unique American art form. In 2002, he created the first International Tap Dance Hall of Fame honoring the contributions of legendary tap dancers by preserving their legacies for future generations to enjoy. He also created the annual Tap Preservation and Hoofer Awards, the Gregory Hines Youth Scholarship Fund, and the Gregory Hines Collection of American Tap Dance Archives which are now housed at the New York Public Library for the Performing Arts. I n 2009, he created and staged the touring production of “Thank You Gregory”, a tribute to the Legends of Tap Dance which can now be seen in theaters across the country. I n January of 2010, he opened the American Tap Dance Center in New York City where he currently directs on-going education and training programs for tappers of all ages and levels.

BRENDA BUFALINO, (ATDF Artistic Mentor/Teacher) is a mixed genre artist; choreographer and tap dancer, a dancer who sings, tells stories, writes books, works clay into shapes that dance, and paints pictures. She has performed her one person shows internationally and has appeared as a guest soloist at Town Hall, Carnegie Hall, and the Kennedy Center among other major venues. In February 2009, she premiered her latest show “Primordial Memories” at the Judson Church in NYC as part of Tony Waag’s “Sound Check Series.” She mentors, lectures and teaches master classes internationally and teaches many workshop series for the American Tap Dance Foundation in New York City throughout the year. As artistic director/ choreographer of The American Tap Dance Orchestra she toured America and Europe with her company, and appeared at The Joyce Theatre, and on PBS “Great Performances…..Tap Dance in America with Gregory Hines.” For many years Ms. Bufalino collaborated and toured extensively with her mentor Charles “Honi” Coles. She has received consecutive grants from the National Endowment for the Arts and is a NYFA fellow. Her critically acclaimed book “Tapping the Source…. tap dance stories, theory and practice” is published by Cod Hill Press. She has created numerous DVD’s and CD’s…. tapping, singing, teaching and telling stories, which are available from her web-site. She is the recipient of the Flobert Award, The Tapestry Award, and The Tap City Hoofer Award, all for outstanding achievement and contributions to the field of tap dance. www.brendabufalino.com