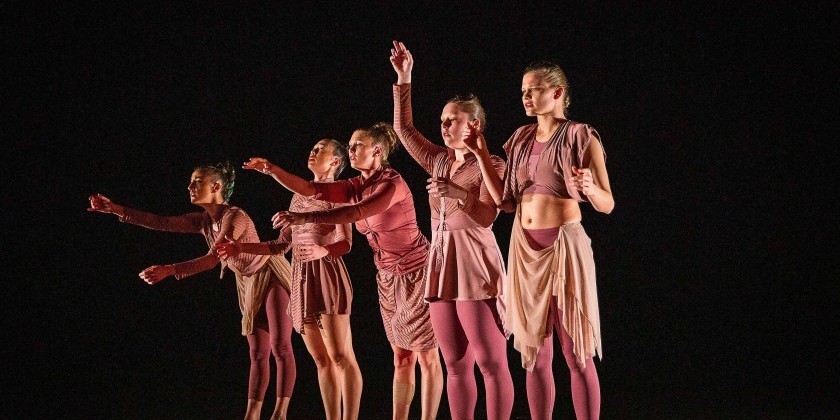 Award-winning contemporary choreographer Ariel Grossman and her company of seven female dancers will celebrate the 12th Anniversary of ARIEL RIVKA DANCE (ARD) with two premieres, repertory and guest artists at Baruch Performing Arts Center, 55 Lexington Avenue (25th Street) in New York City. The program will take place in four performances, Thursday, March 28 through Saturday, March 30 at 7:30pm, with a family matinee on March 30 at 11:30am. The two ARD works in premiere, Mossy and Rhapsody in K, will feature newly commissioned scores by composers David Homan and Stefania de Kenessey. Live music will be included at all performances. *The full ARD lineup below.

Founded in 2008, Ariel Rivka Dance is a critically acclaimed all-female contemporary dance company led by married choreographer/composer team Ariel Grossman (Artistic Director/Choreographer) and David Homan (Executive Director/Composer).  Ms. Grossman’s choreography emanates from a female worldview, often using the lens of motherhood, nursing and child rearing as a platform for emotional yet organized thematic contexts. Inspiration is drawn from the struggles and joys of the human experience. She and the dancers work together to transform these emotions into shapes and stories.

"The dance world has been full of male choreographers, for centuries… choreography is yet another lens of expression that has been influenced mainly by men. But I have a lot to say and so do many other women,” said Ms. Grossman. “I am inspired by the juxtaposition of grace and strength, and I choreograph to capture those seemingly opposite qualities. My dancers embody that spirit,” she said.

Mossy (2018) Premiere - A duet that reflects the physical, emotional and intellectual consequences of constant interruption. Created from a mother’s perspective, familial love evokes positive and negative impulses where frustration and desire compete with the need for space and independence. Feelings of claustrophobia conflict with a mother’s responsibility to provide a sense of happiness and well being for her children. Composer Stefania de Kenessey incorporates her own experience as a mother in the creation of the electronic and melodic score. It is Ms. de Kenessey’s second musical collaboration with Ariel Rivka Dance.
Choreographer: Ariel Grossman
Composer: Stefania de Kenessey
Dancers: Caitlyn Casson and Casie O’Kane
Costume Design: Marianna Tsartolia

Rhapsody in K (2018 World Premiere) evolved from the choreographer’s observation, as mother and teacher, of the raw emotion and freedom of spirit in children. Inspired by watching her own child’s uninhibited dance, Ms. Grossman reimagined her world in adult form. The constant interplay between naive innocence and adult complexity is explored. Self-awareness and the need for predictable behavior patterns and boundaries combine with child’s freedom of movement. How would it look if we let our bodies move without too much thought? What would we say? How would we relate to one another? The dance work explores how adult consciousness and insecurities prevent us from expressing our true selves. The new work investigates humor and lightness that children bring to our world, which the Ms. Grossman believes is needed and appreciated. Music for Rhapsody in K was commissioned by the Charles and Joan Gross Family Foundation.
Choreographer: Ariel Grossman
Composer: Stefania de Kenessey and David Homan
Dancers: Amy Ashley, Cassandra Bowser, Caitlyn Casson, Kristin Licata, Casie Marie O’Kane, Danita Shaheen and Hana Ginsburg Tirosh
Costume Design: Marianna Tsartolia

She (2018) reflects the challenge of unattainable goals, and the wish for perfection in child rearing and its inevitable disappointments. The choreographic juxtaposition of anguish and joy, one mother’s depression and communal bonding, is echoed by the paradox of the music. The choreography grows out of Ariel Grossman’s own postpartum depression, aggravated by the difficulty in breastfeeding her second child.  With “stress about breastfeeding, lack of sleep, and constantly being pulled in every direction and never landing,” in what Ms. Grossman calls, “the emotional wave of motherhood,” she turned to Stefania de Kenessey, a leading figure in contemporary music for a score that she could then choreograph.  The choreographer suggested building a score on the sounds of a breast pump. The breast pump, the work’s only sound, was manipulated by de Kenessey in terms of tempo, filers, and dynamic range. “Creating a score to match the dance, rather than the other way around,” was for the composer called “an eye-opening experience.”
Choreographer: Ariel Grossman
Composer: Stefania de Kenessey
Dancers: Cassandra Bowser, Kristin Licata, Casie Marie O’Kane, Danita Shaheen and Hana Ginsburg Tirosh
Costume Design: Marianna Tsartolia

Ariel Rivka Dance recently presented at the Children’s Museum of Manhattan, Saratoga ArtsFest, the Greenspace Blooms Festival, BAM Fisher and the Battery Dance Festival, and in 2018 toured Baltimore, Boston, Cleveland, Houston and Nebraska. Performances in 2019 will include the NYU/Tisch Summer Residency Festival Performance Series and company tours to Atlanta and Memphis. In 2014, ARD was awarded a residency at MANA Contemporary through Armitage Gone! Dance, and has been a prior grant recipient from the Nathan Cummings Foundation and the Lower Manhattan Cultural Council.

ABOUT THE CREATIVE TEAM:

Ariel Rebecca (Rivka) Grossman founded Ariel Rivka Dance in 2008; a critically acclaimed all-female contemporary dance company led by married choreographer/composer team Ariel Grossman and David Homan. Born and raised in New York City, she trained at LaGuardia High School of Music & Art and Performing Arts and the Joffrey Ballet School under direction of Gerald Arpino for ten years. She earned a B.S. in Dance, with honors, and a Minor in Women’s Studies from Skidmore College. Ariel Grossman holds a Masters Degree in Early Childhood Education, and has curated programs that successfully expose and excite students about dance. Ariel was named one of Jersey (New) Moves Emerging Choreographers in 2016 and was invited back to the 2017 Festival for being a standout past grant recipient.

David Homan is a composer and nonprofit executive for whom a significant part of his career has been dedicated to Jewish and Israeli arts and culture.  He has written works interweaving Jewish melodies and themes and frequently collaborates with Israeli musicians.  David Homan's music has been performed in the US, Europe, Israel, and in New York at Carnegie Hall/Weill Hall, Merkin Hall, CAMI Hall, the Thalia at Symphony Space as well as major dance venues such as NYLA, the Di Capo Opera Theatre, MMAC, and the Joyce. Major groups such as the Di Capo Chamber Players, the Colorado String Quartet, and the American Symphony Orchestra have performed his works, as well as dance commissions with former ABT and Joffrey Ballet dancers, Randy James, Catherine Miller, Ariel Rivka Dance, and choreographers around the US. His recent album releases include EVA, WaterRocks, and the Book of Esther.

“Ariel’s work is thoughtful and provocative without being preachy. She is a true contemporary master who not only understands dance-making, but storytelling" - Adam Schnell, Ballet Vero Beach Artistic Director/CEO