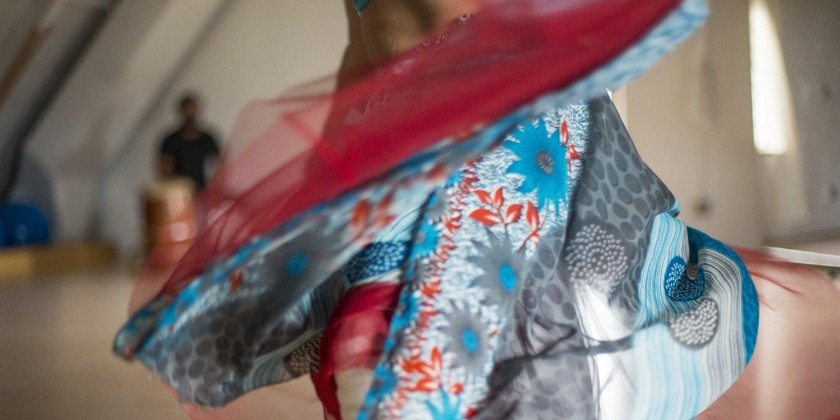 algún día…some day: A duet choreographed and performed by Díaz and Thornton with vocalist José Joaquín García, deals with the urgency of the present moment, a moment that does not exist. In a relationship there is only what we have been and what we will become.

one head many hats: Mixing spoken word, movement, and song, Matthew Thornton investigates personal and social histories dealing with his own identity as son, grandson, and father.

AGUA DULCE DANCE THEATER, Alicia Díaz and Matthew Thornton co-founded Agua Dulce Dance Theater in New York City in 2006. The company creates work for concert dance, multi-media, and site-specific projects. They have performed in Mexico, Puerto Rico and across the U.S., including the 2006 Jacob’s Pillow Dance Festival Inside/Out Series and the Alwin Nikolais Centennial Alumni Concert. The Seed and The Gardener, a film by KimSu Theiler was presented in the 2011 Dance Films @ The Flea Festival. In 2013, Agua Dulce opened for Grammy award winning sextet “eighth blackbird” at the Modlin Center for the Arts.

ALICIA DÍAZ, Puerto Rican dance artist, teaches at The University of Richmond, is co-director of Agua Dulce Dance Theater and is an M.F.A. candidate at The George Washington University, where she was awarded a University Fellowship.  Díaz has performed with Complexions Contemporary Ballet, Donald Byrd/The Group, Joseph Holmes Chicago Dance Theater, Andanza: Compañía Puertorriqueña de Danza Contemporánea, Alice Farley Dance Theater, and Contemporary Motions. Her choreography has been presented in the USA, Latin America and Spain. Most recently, she performed with Maida Wither’s Dance Construction Company at the Kennedy Center and the George Lisner Auditorium, Washington, D.C.

MATTHEW THORNTON combines dance, theater, somatic practices, and martial arts. He performed with Pilobolus Dance Theater and is a master teacher of the Pilobolus Method. Other dance companies: Jody Oberfelder, Freespace Dance, Alice Farley Dance Theater, Contemporary Motions, and recently performed with Maida Wither’s Dance Construction Company at the Kennedy Center and the George Lisner Auditiorium. Thornton teaches Capoeira Angola, partnering, and Chi-gung at The University of Richmond. He has choreographed for University Dancers, and for UR theatre productions. Thornton hosts a monthly Richmond Contact Improvisation Jam, and a weekly Open Session for practitioners of Capoeira Angola.