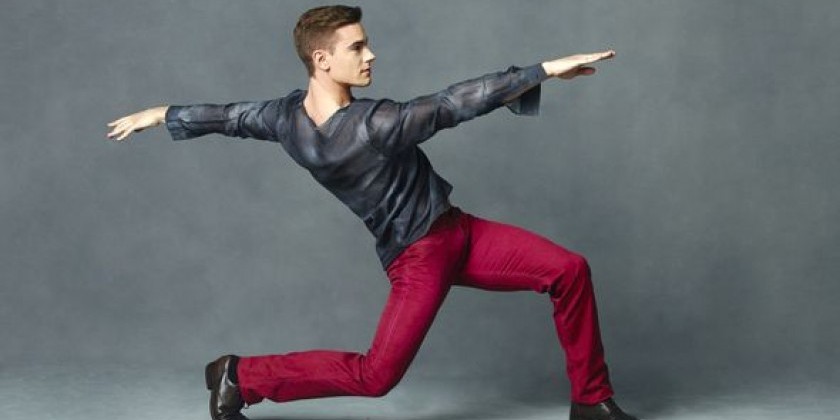 Alvin Ailey American Dance Theater, recognized by U.S. Congress as a vital American “Cultural Ambassador to the World,” returns to New York City Center December 3rd – January 4th  for an annual season that has become a joyous holiday tradition.  The 39-performance engagement comes 25 years after the passing of legendary founder Alvin Ailey, who was recently recognized with the 2014 Presidential Medal of Freedom – the nation’s highest civilian honor.

Hofesh Shechter’s critically-acclaimed Uprising, originally created in 2006, features seven men who intensely bombard the stage in an exhilarating work set to a percussive score by the choreographer himself.  With a movement style that is primal and imbued with a certain high-tension energy and a natural ability to deal with big themes, the 38 year-old Israeli-born Shechter has risen to become one of Europe’s most sought-after dance creators since his move to London in 2002.  Uprising is the first work by Shechter to enter the Ailey repertory.

If you are unavailable to attend any of these opportunities today, please also consider the following:

Our sizzle reel, and season images showcase highlights of this seasons premieres and returning favorites, these materials are hi-res and formatted for TV use, and can be downloaded at the links below:

After the Rain, world renowned choreographer Christopher Wheeldon’s dreamlike duet originally choreographed for New York City Ballet in 2005 – praised for its sublime simplicity and intricate partnering – is revealed in a fresh light as the Ailey dancers make it their own.  Set to music by the Estonian composer Arvo Pärt, the sensual male-female pas de deux has resonated deeply with audiences and will be the first work by Christopher Wheeldon to enter the Ailey repertory.

Bad Blood, restaged by Associate Artistic Director Masazumi Chaya, is a work by former Ailey dancer Ulysses Dove, hailed as one of the most exciting choreographers to emerge in the latter half of the 20th century.  First appearing in the Ailey repertory in 1986 and set to music by Laurie Anderson and Peter Gabriel, this ballet explores the powerful yet extremely tender war between the sexes with emotional passion and boldly athletic moves.