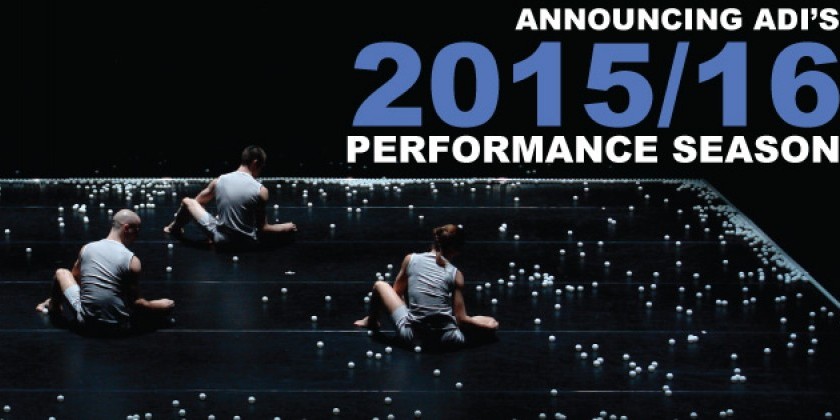 - ADI’s First Presentation of NYC Premieres, for a Month Culminating the 2015-16 Season

- ADI Future Artists Scholarship Fund, Which Will Offer Financial Assistance for Young Dancers from Across the U.S. to Study at Schools of Their Choice

American Dance Institute (ADI) is pleased to announce two initiatives that realize the vision Adrienne Willis, the organization’s Executive Director since 2010, has for ADI in today’s contemporary dance landscape. Willis has reimagined the Rockville, MD-based organization—originally a ballet school founded by former American Ballet Theatre dancer Pamela Booth Bjerknes and Joffrey Ballet principal Michael Bjerknes—as a national one that constantly evaluates the needs of artists throughout their creation process, and fills gaps in the structures that exist to support them. To this end, ADI has launched the ADI Future Artists Scholarship Fund, an application-based program that will provide much-needed financial assistance for young dancers across the country to study at the schools of their choice, and will present New York City premieres for the first time, for a month culminating ADI’s 2015-16 season, also announced today.

When Adrienne Willis assumed leadership of ADI in 2010, she and the board were determined to expand the role and relevance of the organization—to supplement, rather than supplant, existing institutions. ADI conducted a nationwide survey, speaking with dozens of dance artists and dance administrators about how ADI could be most useful to the field. They began presenting contemporary dance in a black box theater in ADI’s converted warehouse headquarters, giving artists such as Crystal Pite, Yvonne Rainer, Tere O’Connor, John Jasperse, Susan Marshall, Reggie Wilson and Jack Ferver a place in the DC area to perform new work, and prompting Sarah Kaufman of The Washington Post to call ADI “the region’s leading edge of edge.”

In 2011, ADI launched its Incubator program to address a well-documented need in the contemporary dance ­field for resources, time and space to more fully develop new work in advance of a national or New York premiere. The program provides companies with seven-day residencies that include unrestricted use of ADI’s theater, support from full-time production staff, housing, meals, transportation, photo and video documentation, work-in-progress showings and more. Often, works in the Incubator program—including several productions in ADI’s 15-16 season—are given a premiere at ADI at the end of their residency.

For five weeks in the summer of 2016, ADI will bring its Incubator program to The Kitchen in New York City. The organization will give five leading American choreographers—Yvonne Rainer, Jane Comfort, Brian Brooks, Jack Ferver and Susan Marshall—a weeklong New York City residency each, in addition to a week earlier at ADI in Maryland, or dedicated studio space in NYC subsidized by ADI. ADI will then present a New York premiere by each of these artists at The Kitchen.

Adrienne Willis said that the new New York component of the Incubator program “will allow ADI to invest in artists, not just projects. By making long-term commitments early in the creation process and assuring ample support in the critical final stages, ADI hopes to free artists to create without limitations, realizing what would otherwise be just possibilities.”

The first of ADI’s New York premieres at The Kitchen will be Yvonne Rainer’s The Concept of Dust, or How do you look when there's nothing left to move? (Moving On), June 2-4, 2016. The work interweaves formal dance and personal themes of aging and mortality with humor and diverse texts—intermittently read by Rainer and the dancers—dealing with ancient Mideast dynasties, paleontological findings and literary quotations. Brian Brooks Moving Company will premiere a new work (June 9-11) staged in a sculptural installation—a type of three-dimensional map—designed and constructed by Brooks with lighting designed by Brooks’ frequent collaborator Joe Levasseur.  Following an Incubator residency and a world premiere (March 18 & 19, 2016) at ADI’s Solange MacArthur Theater in Rockville, MD, Jane Comfort & Company will give the New York premiere (June 16-18, 2016) of a new work focusing on the dance of humanity as performed each moment as people go about their daily lives.

ADI’s month of performances at The Kitchen concludes with the New York premiere of Jack Ferver’s I Want You to Want Me, about which the acclaimed choreographer says, “I thought I would try to make something for everyone. You know, like ballet or a good subscription audience kind of play. I consider myself a populist, but some people really hate my work. They even hate me they hate my work so much. So I thought: ‘Well, why don’t I make a really pretty ballet or a play about a straight couple and their issues?’ So that’s what I’m going to do. Oh, I also just wanted to say, not everyone is going to make it. I don’t mean make it to the show. I mean make it out of the show alive.” Performances will take place June 30- July 2, 2016.

ADI’s 2015-16 Performances at the Solange MacArthur Theater in Rockville, MD

Prior to ADI’s engagement at The Kitchen, ADI will present a full season at its Solange MacArthur Theater in Rockville, beginning with Jillian Peña’s Polly Pocket: Expansion Pack (September 11 & 12, 2015), an epic dance drama that takes inspiration from ballet, psychoanalysis, queer theory and Marxism. In the work, viewers glimpse a trio in their own private world. On September 25 & 26, Urban Bush Women will offer Incubator work-in-progress performances of Walking with ‘Trane, a suite of works based on the life and artistic imprint of John Coltrane, conceived by Urban Bush Women’s Founding Artistic Director, Jawole Zollar. On October 2 & 3, Chris Schlichting will present Strip Tease, which combines patterns and set structures, large-scale spectacle and delicate intimacy, recurrence and surprise, to slyly subvert dance history. Wendy Whelan, Jock Soto and David Neumann will show Hagoromo, an Incubator work-in-progress, October 23 & 24. Hagoromo is a new, multidisciplinary work of dance-theater inspired by one of the masterpieces of Japanese Noh drama and performed by Whelan, Soto and International Contemporary Ensemble (ICE).

Big Dance Theater will perform the world premiere of SHORT FORM, an Incubator workin which the venerable company returns to its movement roots with an evening of short-form pieces, November 6-8. SHORT FORM playfully re-imagines the conventions of a "rep show," showcasing the company's unique blend of dance-theater on an intimate scale. Works will include two world premieres, rarely seen revivals, and re-staged pieces performed for the first time by the BDT ensemble and its signature design team.

Another Incubator work, Palissimo’s Custodians of Beauty, will make its world premiere at ADI November 20 & 21. Can anything still strike a contemporary spectator facing modern disenchantment as beautiful? This is the question that Palissimo choreographer/director Pavel Zuštiak asks in Custodians of Beauty, his new work at the intersection of dance, live music and visual arts. Custodians of Beauty continues Zuštiak’s acclaimed history of collaborations with Christian Frederickson (composer/musician) and Joe Levasseur (lighting designer).

Joe Goode Performance Group returns to ADI February 5 & 6, 2016 with The Resilience Project, which explores how we as humans deal with trauma, using storytelling and performance as a way of finding universality and strength in the face of adversity. Jonah Bokaer will offer two works, Why Patterns and Recess, February 26 & 27. Why Patterns is a new choreography—for stage, gallery, and alternative exhibition space—that examines pattern recognition, design, and perceptual faculties as they apply to the human body and visual imaging. Recess, a collaboration between Bokaer and architect Daniel Arsham, is a constantly evolving and fluid dialogue between the two artists, in which they explore movement, representation, temporarily, memory and space.

On March 18 & 19, Jane Comfort & Company will give the world premiere of the Incubator-supported work they will go on to perform at The Kitchen in June 2016. Pam Tanowitz joins forces with Ballet ADI for performances (April 1 & 2) of the story progresses as if on a dream of glittering surfaces, a shared evening of choreography by Tanowitz and ADI’s Runqiao Du. On April 15 & 16, Steve Paxton will present Bound, a dance performance composed of vignettes; each is isolated, but like numbers in a column, they begin to add up to something larger as they accumulate. ADI’s season at the Solange MacArthur Theater will conclude with the premiere of a new work, developed in the Incubator program, by Brian Brooks Moving Company; ADI will then present the piece’s New York premiere at The Kitchen in June 2016.

ADI has established the ADI Future Artists Scholarship Fund to address a critical need in the dance world to finance and support the numerous gifted promising dancers in the country who have the talent but lack the resources to study at professional schools. The fund will allow young dancers from across the country to study at the schools of their choice.

In order to create the new scholarship program, ADI will close its own ballet school at the end of its summer 2015 session. Over the past few months, ADI has worked to examine how they can best impact the field of dance education—including how best to help ensure its longevity—and have come to the conclusion that operating the school, when there are so many other excellent dance education institutions within miles of ADI (and beyond) offering similar classes and instruction, is not the best use of ADI’s resources.

Adrienne Willis said, “We feel the ADI Future Artists Scholarship Fund will make a great impact on the future of the art form, ensuring that access to quality dance education can become a reality for a substantial number of talented students who lack the adequate resources or geographic proximity to attend the country’s best schools.”