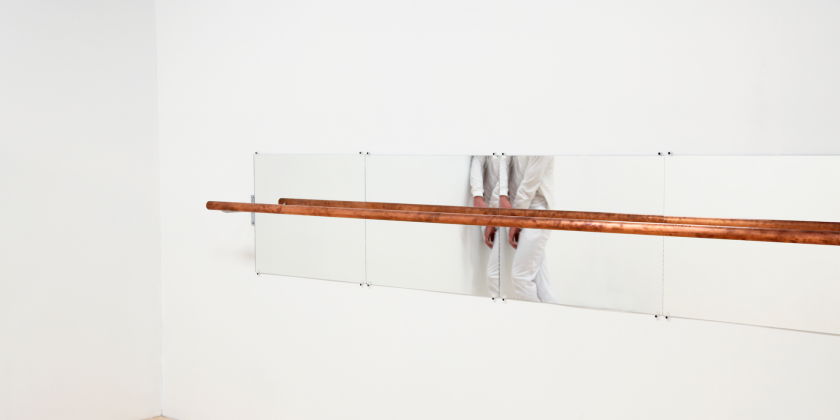 This R&D Season leads an investigative examination of choreography via a range of activities, anchored by an ambitious six-month residency with artist duo Gerard & Kelly (Brennan Gerard and Ryan Kelly) and a multiphasic, international dance-for-camera commission with the Brooklyn-based performance project AUNTS. Here, choreography is mined for its potential to negotiate the systems of value that govern intimacy, transmission, and exchange alongside an interrogation of the systems of control specific to different mediums and the politics of space.

Gerard & Kelly, Fall 2014 R&D Season Artists-in-Residence
“P.O.L.E. (People, Objects, Language, Exchange)”
September 1, 2014–February 15, 2015
Gerard & Kelly work within an interdisciplinary framework to create project-based installations and performances that use choreography, writing, and a range of other mediums to address questions of sexuality, collective memory, and the formation of queer consciousness. This fall, they will develop a new project that continues their investigations of the choreography of relationships and the movement of cultural transmission via the vernacular of pole dancing. Their research will utilize multiple spaces throughout the Museum, include public programs and workshops, and culminate with a solo exhibition on view in the Museum’s Lobby Gallery from February 4 to 15, 2015.

From October 8, 2014 to January 25, 2015, Gerard & Kelly will transform the Fifth Floor gallery into a space for fieldwork, movement practice, and interactive research; it will also be used as a place to display documentation of the events, encounters, and exchanges that make up their residency. Among other resources, the gallery will contain practice poles for dancing, occasionally used for practical skilling by the artists, their collaborators, and the public. As an extension of their research, Gerard & Kelly have also organized “In Bed With…,” a series of two-on-one encounters exploring questions of precarity and work, and the transmission of performance scores, choreography, objects, and poetry. “In Bed With…” will take place November 1, 8, 15, and 29. Participants to be announced. Presentation support for "P.O.L.E. (People, Objects, Language, Exchange)."

Gerard & Kelly, Workshops as Work
Curious as to how a work of performance has multiple lives—both as something to be watched and experienced as a reader and as something to be done and experienced as a participant—Gerard & Kelly will reformat two of their existing projects into public workshops taking place in the New Museum Theater. These workshops will test intimate scores with larger groups and explore transmission of work entering its second and third “generation.”

CLASSCLASSCLASS at the New Museum
January 28–February 15, 2015
Augmenting their residency, Gerard & Kelly have invited New York City–based CLASSCLASSCLASS to operate its program of process-based, affordable dance classes in the New Museum Theater. CCC has made a significant intervention into education in the fields of performance and dance and has structured a production model that relates to broader explorations of alternative ecologies for working and living. Classes are open to adult dancers and non-dancers from the general public. CLASSCLASSCLASS class schedule is available here.

“AUNTSforcamera” unfolds publicly through an open-studio production week, shared simultaneously by all participating artists and resulting in new dance-for-camera works that will be exhibited as an immersive moving image installation at Trouw and, later, the New Museum (including new material produced with artists and audiences at Trouw). Select works under commission include an interactive game utilizing hacked Kinekt software to reward players for learning the original Harlem Shake dance; a new social media platform that will accumulate eight-second viewer-generated dance videos into a single-channel loop; a multi-channel sculptural installation reconstituting the dancing bodies of its creators into a single “exquisite corpse” moving-image form; and an interactive video installation combining hand-dance and shadow puppetry with aerial footage from the operation of an AR Drone flown inside the New Museum Theater.

New Museum Seminars: (Temporary) Collections of Ideas
CHOREOGRAPHY
Applications Due: September 8, 2014
Classes: September 22–December 15, 2014
Consortium: January 23–24, 2015
Aligned with R&D Season themes, New Museum Seminars provide a platform for discussing and debating ideas as they emerge, in real time, and for developing scholarship directly referencing art’s place in culture. A group of ten to twelve participants from diverse backgrounds will meet regularly for twelve weeks to plan and implement a bibliography, as well as a public-facing event featuring leading figures whose work has shaped the topic of study.

Experimental Study Program
Classes: October 9–December 11, 2014
The New Museum’s Experimental Study Program pairs youths (fifteen to twenty years old) with artists to collaborate on projects and research related to Season themes. Over several months, teens and New Museum staff will undergo an intensive exploration of CHOREOGRAPHY as framed by Gerard & Kelly, CLASSCLASSCLASS, and AUNTS to consider questions about technique, self-determination, and the role of the non-object within museums. Support for ESP.

About New Museum
The New Museum is the only museum in New York City exclusively devoted to contemporary art. Founded in 1977, the New Museum is a center for exhibitions, information, and documentation about living artists from around the world. From its beginnings as a one-room office on Hudson Street to the inauguration of its first freestanding building on the Bowery designed by SANAA in 2007, the New Museum continues to be a place of experimentation and a hub of new art and new ideas.