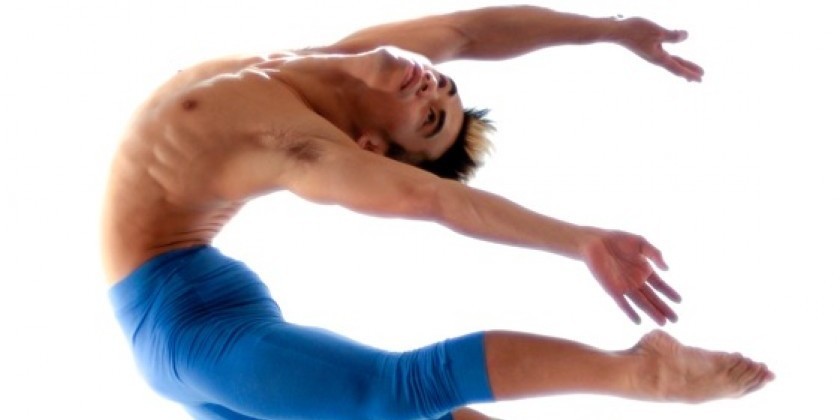 "In 2010, Villanueva founded the New York-based BalaSole Dance Company with the mission of showcasing dancers, like him, whose types are underrepresented in the development of their own individual artistic voices." - Lisa Jo Sagolla, Backstage, 2011

"BalaSole is a hybrid creature.  It's part dance company and part showcase for aspiring and dancer/choreographers.  Where it succeeds is in the presentation of skilled artists who command the stage in their self-made solos." - Tim Martin, Dance Europe, 2011


ROBERTO VILLANUEVA, Executive & Artistic Director and Founder of BalaSole Dance Company, presents the 11th concert season of his Company in "Visages," a new program of ten dancer/choreographers in a broad range of dance styles, music choices and artistic voices, on October 24 & 25 at Ailey Citigroup Theater.  Choreographer/dancers selected for the October performances have performing credits that include the Martha Graham II company, Washington D.C.'s Company E, and New York City Opera.


For the October concert, BalaSole will feature:

Roberto created BalaSole because he decided that "it was time to create a multi-ethnic organization that would open its doors to underrepresented dance artists of all shapes, sizes, ages. backgrounds, and artistic expressions."  BalaSole is the only dance company in the U.S. with a mission to address the gaps in the field of concert dance.  The company's artists are mentored and provided the artistic freedom to find and hone their own voices.  Diversity and individuality are the keywords of the organization, which has, in only two years, mentored and given performance opportunities to dozens of dancer/choreographers.  The Company has presented seasons at Baryshnikov Arts Center's Jerome Robbins Theater, Ailey Citigroup Theater, New York Live Arts, and Tribeca Performing Arts Center.  BalaSole is the resident company of the College of Mount Saint Vincent in Riverdale, NY.


MORE ABOUT THE COMPANY
KATHERINE ALVARADO, born and raised in Venezuela, studied on scholarship at the Thomas Armour Youth Ballet Conservatory of Dance where she trained in ballet under Mariana Alvarez, Charin Suarez, and Ruth Weisen.  She has performed with the Jubilation Dance Ensemble, under the direction of Michelle Grant Murray, Director of the Dance Department at Miami Dade College, where she trained in Horton, Graham, and Laban techniques.  Also, she was a member of the Dance Theatre of Harlem's professional training program on partial scholarship.

STEVEN E. BROWN came to New York from the South, and is now a resident of Harlem.  He began a career in design in 1984 in Atlanta.  Studying music and art at UGA has lead to the inclusion and implementation of dance and performance as vibrant elements to his ever changing portfolio.  "I look to the art of collaboration as one of the highest forms of creation, always thankful for the blessing to be able to share and experience the whole of life as a continuous creative peace."

JANINA CLARK, from Portland Oregon, started her training at Pacific Festival Ballet, dancing all over the Portland community while gathering international opportunities to study abroad.  These have included the Royal Ballet School (London), Thomas Edson Dance School of Excellence (Brisbane, Australia), and Ballet Philippines (Metro Manilla, Philippines).  In 2011, she moved to New York to study in the Conservatory of Dance at SUNY Purchase.  Currently in her third year in the BFA program, Ms. Clark is very appreciative for the chance to show her culture through her dancing.

CHRISTA HINES enrolled as an undergrad at East Carolina University in Greenville, NC.  She received a BFA in Dance Performance and a BS in Interpersonal Organizational Communication in May 2013, and during her time there was trained in ballet, modern, contemporary and jazz.  She trained in ballet under the direction of faculty member Galina Panova, a renowned ballerina from Russia, and performed in works by Jennifer Archibald and Mark Haim.  One of her choreographies was selected and presented at the 2013 American College Dance Festival (ACDFA) in Tampa, Florida.

JASON GARCIA IGNACIO, trained in his native Philippines and NYC, debuted with Daniel Gwirtzman Dance Co.  He subsequently performed as a principal and soloist with Graham II, Cortez'nCo., Connecticut Ballet, Verb Ballets and American Repertory Ballet.  In 2007, Mr. Ignacio moved to Washington, DC to join CityDance Ensemble.  He is a co-founder and former Associate Artistic Director of Company E.   Mr. Ignacio has earned many awards throughout his career, including being named as one of the "Top 20 Showstopper Artists" by the Washingtonian Magazine in 2008, the 2009 Mayor's Arts Award for "Outstanding Emerging Artist", the 2009 MetroDC Dance Award for "Outstanding Individual Performance" and for his choreography of The Mountain, the John F. Kennedy Center for the Performing Arts Local Dance Commissioning Project in 2009.  He was granted the "PEARL Cultural Heritage Award" by the Embassy of The Philippines for his major contribution to the performing arts and "Champion In Diversity" by the U.S. Department of Agriculture.   His career includes significant international work, teaching workshops and master classes at dance companies, festivals and institutions around the world, including the Philippines, China, Israel, Kazakhstan, Kyrgyzstan, Tajikistan, Belarus, Abu Dhabi, Finland, Spain and Germany.

CORAL MARTIN began her dance training in the San Francisco Bay Area, and took summer intensives at San Francisco Ballet School, Boston Ballet School, Kennedy Center, Dance Theatre of Harlem, Alonzo Kings LINES Ballet, and AXIS Dance Company, among others.  Ms. Martin continued honing her craft while pursuing a degree in Anthropology at Harvard University.  In 2011, she was awarded Harvard's Shaw Traveling Fellowship, which allowed her the opportunity to study in Paris, France under Wayne Byars, Martin Kravitz, and Andrezj Glegolski.   Upon returning to the U.S. last year, Ms. Martin joined Katy Rous' World Dance Fusion, and throughout the years has performed extensively with her mentor and collaborator Jetta Martin.

DELPHINA PARENTIV trained at North Carolina School of the Arts and received her BFA from The Juilliard School where she had the opportunity to perform works by choreographers Ohad Naharin, William Forsythe, Twyla Tharp, Azsure Barton, and Eliot Feld.  Delphina's performing credits include Gallim Dance, Skybetter and Associates, Pam Tanowitz Dance, Adam Barruch Dance, Loni Landon Projects, and Washington D.C.'s Company E.    Delphina  has set her own choreography on CityDance Ensemble, the Eureka Dance Festival, and Newsteps 2011, an emerging choreographers showcase.  She is the recipient of the Metro DC Dance Award 2009 for Outstanding Individual Performance, and has been working with Leesaar the Company since May 2013.

URSULA VERDUZCO trained at Ballet Austin Academy and the Joffrey Ballet School in NYC with full scholarship.  She has danced with numerous companies including Ballet Austin, Benjamin Briones Ballet, New York City Opera, Eglevsky Ballet, Connecticut Ballet, and Ad Hoc Ballet.  She has been honored to appear in the July 2010 Dance Magazine as one of the dancers to watch in their “Race Issue”.  As a choreographer, Ms. Verduzco has created commissioned works for The Staten Island Ballet for The International Choreographers Festival, the Ellison Ballet for the Youth America Grand Prix, Benjamin Briones Ballet and Nomad Contemporary Ballet with whom she is presently working on her second commissioned work.  Ms. Verduzco has also presented her work at Independance, Dance Tracks, Mix-Tape, Kat Wildish Productions, International Choreographers Festival, Mid-Pointe Project,The Latin Choreographers Festival and YAGP, among others.  She is founder/director of The Latin Choreographers Festival, created in 2008 to share, support and present the work of talented Latin Choreographers in NYC.  The Festival celebrated its 5th Anniversary last year.

ROBERTO VILLANUEVA, born in the Philippines, is the Executive/Artistic Director and Founder of BalaSole Dance Company.  He trained briefly at SUNY Purchase Conservatory of Dance and received his BA in Dance Performance from University at Buffalo.  Acclaimed nationally and internationally for his abilities as a dance artist, Roberto has been hailed "for the deftness and technical control of his dancing" (The New York Times).  He has been described as "a poetic dancer" (New York Magazine), "powerhouse dancer" (New York Daily News), "breathtaking" (Swiss Newspaper La Liberté), "an extraordinarily gifted dancer" (Attitude Magazine), "a small powerhouse" (The Village Voice), "a mentor with a mission" (Back Stage New York), "an experienced performer" (TheaterScene.net), "memorable" (Art Times), and "fearless" and "provocative" (ENV Magazine).  Roberto has performed, conducted dance residencies, judged dance competitions, and taught master classes in U.S., Europe, and Asia.  He has worked with renowned choreographers such as Dwight Rhoden, Kevin Wynn, Milton Myers, and Eleo Pomare.  He has performed with dance companies such as Complexions Contemporary Ballet, Alpha Omega Theatrical Dance Company, Steeledance, Marie-Christine Giordano Dance, Pick of the Crop Dance, and Buffalo City Ballet.  Roberto has mentored/worked with artists from renowned companies such as the Limón Dance Company, Elisa Monte Dance, Lucinda Childs Dance, Parsons Dance, Metropolitan Opera Ballet, Alvin Ailey American Dance Theater, Philadanco, Joffrey Ballet, Donald Byrd/The Group, Ballet Frankfurt, Paul Taylor Dance Company, Twyla Tharp Dance, Sokolow Theatre/Dance Ensemble, The Isadora Duncan Dance Company, Gus Giordano Jazz Dance Chicago, and Rockettes.  Roberto has been commissioned to teach/choreograph for various institutions including the Alpha Omega Theatrical Dance Company, University at Buffalo, East Carolina University, Glendale Community College, and Ballet Philippines.  He has performed/ presented his works at the American College Dance Festival and at renowned New York City venues including the Carnegie Hall, Lincoln Center, Baryshnikov Arts Center's Jerome Robbins Theater, The Alvin Ailey Citigroup Theater, New York Live Arts (formerly Dance Theater Workshop), and Tribeca Performing Arts Center.  He served on the faculty of Dance Masters of America's Teachers Training School.  In addition, he was a presenter at the University of Buffalo's 2010 Coast to Coast Arts, Entertainment, and Media Symposium, as well as the National Dance Education Organization's 2010 annual conference.  Roberto is a recipient of the 2011-2012 Harlem Stage Fund for New Work Award for the creation and development of his one-man show titled "Pieces of Me:  An inside look at a dance artist's journey."  Harlem Stage Fund for New Work receives support from the Jerome Foundation.  Previous recipients of this award include notables such as Donald Byrd, Ronald K. Brown/Evidence, Nathan Trice, and Earl Mosley.  Roberto is an AMERICAN BALLET THEATRE® Certified Teacher in Primary through Level 3 of the ABT® National Training Curriculum.  Also, he currently serves as an Arts and Education Outreach Administrator at Dance Theatre of Harlem, and as an Adjunct Faculty at the College of Mount Saint Vincent.  Additionally, Roberto was nominated for The Outstanding Filipino American (TOFA) 2012 Award under the Arts & Culture category.  Past TOFA awardees, nominees and honorees include U.S. Marshals spokesperson Roland Ubaldo, Pulitzer Award-winning journalist Jose Antonio Vargas, TONY Award-winner Lea Salonga, and Lorna Schofield (President Obama's nominee for N.Y District Court Judge).