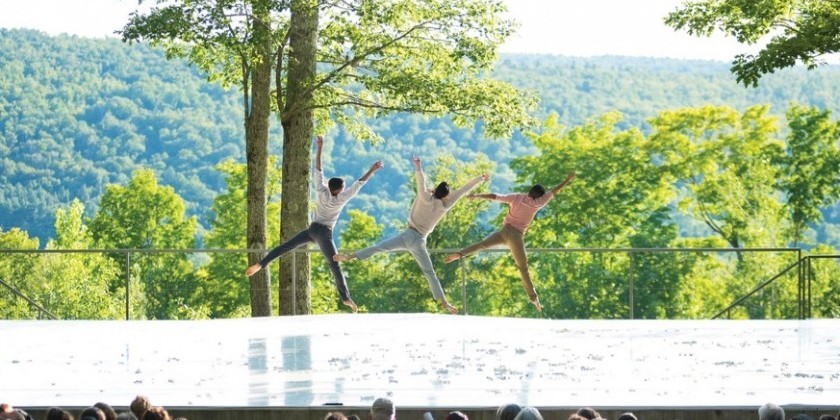 What: Jacob’s Pillow Dance Festival invites artists of all styles to participate in the first ever Inside/Out: Chance to Dance viewers’ choice contest. An exciting opportunity to perform on the Pillow’s iconic outdoor stage, the Chance to Dance contest is a viewer-selected online competition that allows the public, peers, and fans of artists to vote on their inclusion in the Inside/Out Performance Series for Festival 2017. Submissions to the contest will be accepted from February 6-20, 2017; voting is open to the public on PillowTV, the Jacob’s Pillow YouTube channel, from February 21-26. Winners will be announced on Tuesday, March 7 and will perform on July 21, 2017 as a part of Jacob’s Pillow Dance Festival’s 85th Anniversary Season.

Inside/Out performances occur every Wednesday, Thursday, Friday, and Saturday from 6:15-7pm throughout the annual Festival. Performances take place at the Marcia & Seymour Simon Performance Space on the outdoor Henry J. Leir Stage, a setting that is described by The New Yorker as “a breathtaking outdoor stage overlooking the lush Berkshire hills.” An essential part of the Pillow’s mission and beloved tradition, Inside/Out is free and open to the public, featuring dance styles ranging from classical ballet and hip-hop to tap and folkloric dance. It is a venue geared especially toward educating audiences about dance in a casual outdoor setting, and giving the opportunity to all people, regardless of their financial means, to experience dance.

How: Applicants can submit their video to the Jacob’s Pillow website between February 6-20.  All submissions will go through an initial vetting process by Jacob’s Pillow. Up to 10 videos will be hosted on the PillowTV YouTube page and will be open for public voting from February 21-26. Video submissions must be no more than three minutes in length. Content of submissions must be family friendly, and suitable for the outdoor setting.

When: Applications are accepted on a rolling basis until Monday, February 20 at 11:59pm. Winner(s) will be announced March 7, 2017.