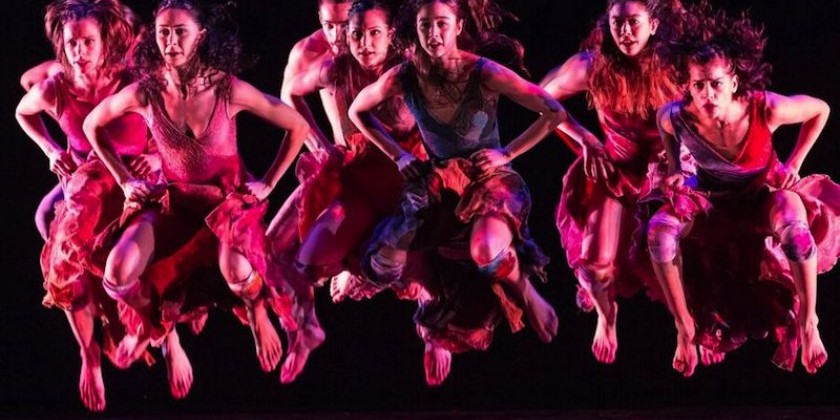 TO PERFORM THIS WEEKEND IN CALIFORNIA

Bury Me Standing by Ramón Oller

Ballet Hispanico, celebrating 45 years as the nation’s premier Latino dance organization, will present an evening of repertory work showcasing the very best of their artistic creations at The Luckman Fine Arts Complex at Cal State LA on March 12, 2016 at 8pm. General tickets range from $25 to $45, with discounts available for students, and can be purchased online or by phone via Ticketmaster, or directly through The Luckman Box Office at 323-343-6600.  For more information, visit http://www.luckmanarts.org/events/.

Artistic Director and CEO Eduardo Vilaro debuts a program that promises to be as transcendent as the company’s “extremely capable and charismatic dancers” (The New York Times), featuring Ballet Hispanico’s effervescent signature work Club Havana by Cuban-American choreographer Pedro Ruiz along with a double bill of Spanish favorites: the West Coast Premiere of Gustavo Ramírez Sansano’s colorful, amusing and fast-moving Flabbergast, as well as a revival of Ramón Oller’s beloved and haunting Bury Me Standing.

“Pedro Ruiz and Ramón Oller both have a meaningful history with Ballet Hispanico, and Gustavo Ramírez Sansano has quickly established himself as a standout choreographic voice since we introduced his work to New York audiences two years ago. Their works honor Ballet Hispanico’s trajectory while embracing our forward-thinking spirit,” said Eduardo Vilaro, Artistic Director and CEO of Ballet Hispanico.

In keeping with its mission to make the beauty of the arts and Latino culture accessible to all communities, Ballet Hispanico’s Eduardo Vilaro and Sr. Director of Community Engagement AnaMaria Correa will be leading a series of arts education activities in local schools throughout the week.

In Flabbergast, Gustavo Ramírez Sansano exposes with humor our stereotypes and preconceived ideas about new and foreign places. Hailed by the Chicago Tribune as a “fun-filled spectacle,” the piece tells the story of a newcomer coming to a place for the first time in a “colorful, amusing, fast-moving” style.

The unique culture of the Gypsy or "Roma" people, a marginalized community that has journeyed across continents for a thousand years, inspired Spanish choreographer Ramón Oller to create Bury Me Standing. The compelling rhythms and melodies which accompany the ballet—drawn from Spain and Eastern Europe, traditional folk songs, and contemporary world music—reflect the emotional essence of the Roma: their strong communal bonds, sensuality, feelings of oppression and longing, and their strength and exuberance.

A portrait of the glamorous Havana of the 1950s during the heyday of Cuban music, dance and nightlife. The intoxicating rhythms of the conga, rumba, mambo, and cha cha are brought to life by choreographer Pedro Ruiz, a native of Cuba, in this re-imagined nightclub filled with the exhilarating sounds, colors and ambience of that golden era.

MetLife Foundation is the Official Tour Sponsor of Ballet Hispanico

Celebrating 45 years of sharing and reflecting the ever-changing diversity of Latino cultures, Ballet Hispanico is the new expression of American contemporary dance. Founded by Tina Ramirez, recipient of the National Medal of Arts, and now led by Artistic Director Eduardo Vilaro, the Company has produced world-class, multifaceted performances that have featured master works by Nacho Duato, cutting-edge premieres by Cayetano Soto and Annabelle Lopez Ochoa, and live music collaborations with renowned artists such as Paquito D’Rivera and Ruben Blades—to name a notable few. Ballet Hispanico has performed for audiences totaling over 3 million, throughout 11 countries, and on 3 continents. Through the work of its professional company, school of dance, and community arts education programs, Ballet Hispanico celebrates the dynamic aesthetics of the Hispanic diaspora, building new avenues of cultural dialogue and sharing the joy of dance with all communities. For more information, visit www.ballethispanico.org. Follow Ballet Hispanico on Facebook, Instagram and Twitter.

EDUARDO VILARO joined Ballet Hispanico as Artistic Director in August 2009, becoming only the second person to head the company since it was founded in 1970. He has been part of the Ballet Hispanico family since 1985 as a principle dancer and educator, after which he began a ten-year record of achievement as Founder and Artistic Director of Luna Negra Dance Theater in Chicago. Mr. Vilaro has infused Ballet Hispanico’s legacy with a bold and eclectic brand of contemporary dance that reflects America’s changing cultural landscape. Born in Cuba and raised in New York from the age of six, he is a frequent speaker on the merits of cultural diversity and dance education.

The Luckman Fine Arts Complex at Cal State LA stands at the gateway to the San Gabriel Valley. Patrons experience music, dance, theatre, visual arts, and film in a lovely, relaxed setting. Easily accessible from the 10 and 710 freeways, or from the Pasadena area via surface streets. The Luckman Theatre seats 1,152 patrons and features one of the largest stages in Los Angeles. Contemporary art exhibitions in the Luckman Gallery have garnered national and international press attention. A small amphitheatre provides a stage area for concerts, catered receptions, and dancing on the Street of the Arts. The final component, the Intimate Theatre, a modular 300-seat theatre, had its inaugural performance on November 18, 2004.

The Luckman Theatre was constructed in 1994 on the campus of California State University Los Angeles. Designed by The Luckman Partnership, Inc. This prestigious Los Angeles architectural firm is responsible for such landmark structures as the Los Angeles Forum, Madison Square Garden and Los Angeles International Airport. The Luckman Theatre was designed to reflect the beauty and strength of "old" California. Characterized by sun-drenched brick buildings and a tiered street of dramatic arches and columns. The Luckman has been described as a perfect blend of the old and the new. Reminiscent of a Roman forum, while maintaining the glorious spaciousness, which defines Southern California.