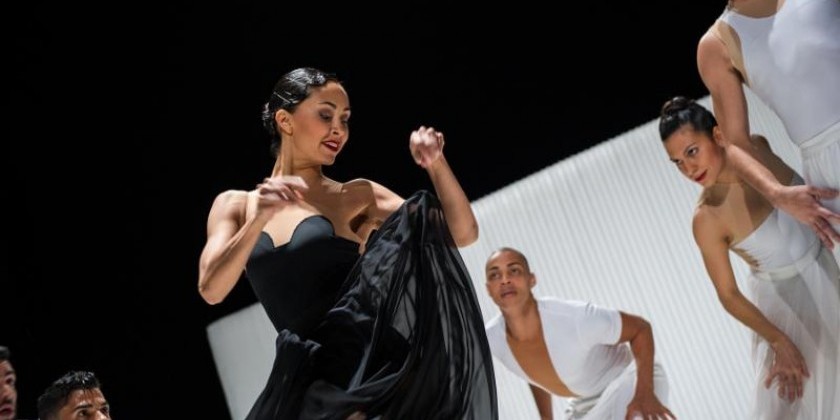 Special Matinee for Children and Families on Saturday, April 18

New York, NY - March 5, 2015 -Ballet Hispanico, recognized as the nation's leading Latino dance organization since 1970, returns to the Joyce Theater from April 14-26, 2015 with 15 performances featuring five dynamic programs. Tickets start at $10 and are on sale now at www.joyce.org.

Under Artistic Director Eduardo Vilaro, Ballet Hispanico has melded its Latino roots with an eclectic, sleekly modern style that has made it one "of the best contemporary repertory ensembles" (The New York Times). Highlights of this year's Joyce season include a raw and athletic world premiere by Mexico-based choreographer Miguel Mancillas and the dazzling New York premiere of Show.Girl. by Miami-based, Princess Grace Award-winning choreographer Rosie Herrera. Other highlights include the Joyce Premiere of Gustavo Ramírez Sansano's CARMEN.maquia, a contemporary spin on the iconic story about a passionate gypsy with set design by Luis Crespo and costumes by fashion designer David Delfin; Sombrerísimo, choreographed by Annabelle Lopez Ochoa and commissioned by New York City Center for the 10th anniversary of the Fall for Dance Festival; and El Beso, choreographed by Gustavo Ramírez Sansano, with original costumes by Venezuelan fashion designer Angel Sanchez.

For the first time during its New York Season, Ballet Hispanico will also offer a 90-minute matinee on Saturday, April 18 that is specially curated for children and families featuring excerpts from Ballet Hispanico's diverse repertory and a Q&A with the dancers. Hosted by Artistic Director Eduardo Vilaro and Education Director AnaMaria Correa, Ballet Hispanico's fun, interactive and educational Performances for Young People-now celebrating 30 years-give families a glimpse into the beauty of the arts and Latino culture.

"Our New York Season truly offers something for everyone," said Eduardo Vilaro, Artistic Director of Ballet Hispanico. "The works this season highlight the full breadth of the company's powerful ability to interpret the many shades of the Latino cultural experience. From raw human expression to stylized theatrical seduction, each work is a chapter in the past, present and future of our American experience. And, I am particularly excited to offer our beloved and signature Performances for Young People to family audiences through a special Saturday matinee."

A raw and athletic world premiere by Mexico-based choreographer Miguel Mancillas that explores, through notions of power and possession, the ways in which we seek to conquer spaces and people. Mr. Mancillas's work came to fruition through Ballet Hispanico's Instituto Coreográfico, an innovative choreography lab program for Latino dance makers.

Hailed as a "masterpiece" by the Chicago Sun-Times, CARMEN.maquia is a Picasso-inspired contemporary take on Bizet's beloved classic. The physically charged and sensual choreography fuses contemporary dance with nods to the Spanish paso doble and flamenco. A stunning set design by Luis Crespo and minimalist black-and-white costumes by fashion designer David Delfin evoke the paintings of Pablo Picasso. Highly original and full of elaborate partnering, CARMEN.maquia is a bold and electrifying reimagining of this tragic tale.

An absorbing exploration of identity, Sombrerísimo references the surrealist world of the Belgian painter René Magritte, famous for his paintings of men in bowler hats. This athletic work for six male dancers was commissioned by New York City Center for the 10th anniversary of the Fall for Dance Festival.

Choreography by Eduardo Vilaro
Asuka is a celebration of the music of Celia Cruz through the lens of the Latino experience. Cruz, renowned as the "Queen of Salsa," captured the heart of Latinos the world over and became a symbol of perseverance for many. Through rich imagery and humor, Eduardo Vilaro explores the struggles of departure from one's homeland and the exuberance of success experienced by a community.

Choreography by Ramón Oller
Catalan lyrics, haunting tableaus, and relationships that stem from the dark side of the heart shape this powerful and highly physical piece of dance theater by Catalan modernist Oller.

Bring the whole family to a 90-minute, fun-filled journey through Latin American dance and culture featuring excerpts from Ballet Hispanico's diverse repertory and a Q&A with the dancers. Hosted by Ballet Hispanico Artistic Director Eduardo Vilaro and Education Director AnaMaria Correa, our fun, interactive and educational Performances for Young People-now in their 30th year-give families a glimpse into the beauty of the arts and Latino culture. All tickets $25.

Since its inception in 1970, Ballet Hispanico has been recognized as the nation's premier Latino dance organization. Led by award-winning Artistic Director Eduardo Vilaro, the Ballet Hispanico Company has performed for audiences totaling over 3 million, throughout 11 countries, and on 3 continents. The Company's commitment to contemporary repertory has produced world-class, multifaceted performances that have featured master works by Nacho Duato, cutting-edge premieres by Cayetano Soto and Annabelle Lopez Ochoa, and live music collaborations with renowned artists such as Paquito D'Rivera and Ruben Blades-to name a notable few. Through the work of its professional company, school of dance, and community arts education programs, Ballet Hispanico celebrates the dynamic aesthetics of the Hispanic diaspora, building new avenues of cultural dialogue and sharing the joy of dance with all communities. For more information, visit www.ballethispanico.org. Follow Ballet Hispanico on Facebook and Twitter.

THE JOYCE THEATER FOUNDATION, INC., a non-profit organization, has proudly served the dance community and its audiences since 1982. The founders, Cora Cahan and Eliot Feld, acquired and renovated the Elgin Theater in Chelsea, which opened as The Joyce Theater in 1982. The Joyce is named in honor of Joyce Mertz, beloved daughter of LuEsther T. Mertz. It was LuEsther's clear, undaunted vision and abundant generosity that made it imaginable and ultimately possible to establish the theater. One of the only theaters built by dancers for dance, The Joyce Theater has provided an intimate and elegant New York home for more than 290 domestic and international companies. The Joyce has also commissioned more than 130 new dances since 1992. In 1996, The Joyce created Joyce SoHo, a dance center providing highly subsidized rehearsal and performance space to hundreds of dance artists. New York City public school students and teachers annually benefit from The Joyce's Dance Education Program, and adult audiences get closer to dance through pre-engagement Dance Talks and post-performance Humanities discussions. The Joyce Theater now features an annual season of approximately 48 weeks with over 340 performances for audiences in excess of 135,000.

Ballet Hispanico's 2015 New York season is made possible by Jody and John Arnhold, Goya Foods, The Harkness Foundation for Dance, Bloomberg Philanthropies, The Fan Fox & Leslie R. Samuels Foundation, The Shubert Foundation, The Princess Grace Foundation - USA and with public support from the National Endowment for the Arts, the New York State Council on the Arts, a state agency, the New York City Department of Cultural Affairs in partnership with the City Council, and Spain Culture New York-Consulate General of Spain & Spain Arts & Culture.

MetLife Foundation is the Official Tour Sponsor of Ballet Hispanico.

American Airlines is the Official Airline of Ballet Hispanico.

Tickets start at $10 and are available for purchase in person at the Joyce Theater Box Office, by phone at (212) 242-0800, or online at joyce.org. Ticket prices are subject to change.