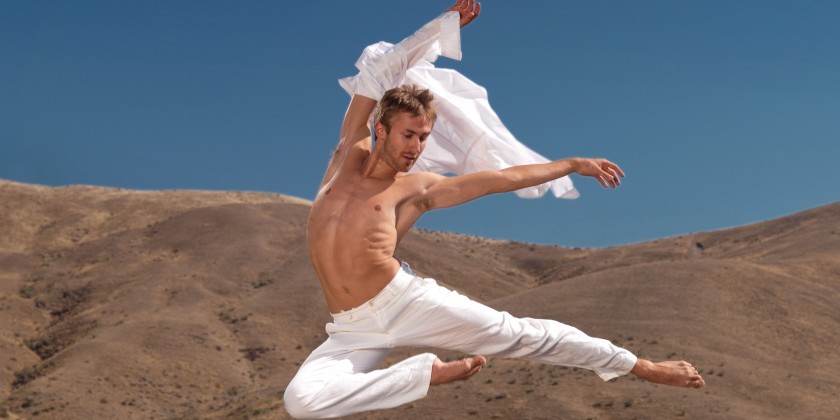 January 6, 2014 – (Becket, MA) This June, Jacob’s Pillow Dance Festival will host the final farewell performances of Trey McIntyre Project as a full-time dance company.  Following its six-show engagement in the Ted Shawn Theatre, June 25-29, the company will broaden its focus to include other new artistic projects.

“The Pillow seems the perfect place to close this chapter of the Trey McInytre Project.  Our connection began with a backstage conversation about Trey wanting to produce a “project” with a group of his favorite dancers.  I invited them to perform in the Doris Duke Theatre in 2005.  The company made its official full-time debut in 2008.  It was a big success, and included a world premiere with music by Peter Yarrow.

Trey is always ready for new challenges, and I am eager to try new ideas.  Audiences connect with Trey’s work – and the exceptional dancers in his company – in a way I have not seen in many years.  We are honored to host the farewell performances of the Trey McIntyre Project.  It will be a very special week and a homecoming of sorts.  Trey is deeply creative in many ways, and I’m sure this new artistic direction will be interesting and prolific.  I look forward to seeing what the future holds for him and his fabulous dancers.”

Boise-based Trey McIntyre Project first appeared at the Pillow in 2005 in the Doris Duke Theatre, when the ensemble was touring only in the summer as a part-time pickup company featuring dancers from top national ballet companies. The company returned in 2006 (this time in the Ted Shawn Theatre), made its official full-time company debut at the Pillow in 2008, and had subsequent engagements in 2010 and 2012. McIntyre and his dancers have participated in numerous Jacob’s Pillow Post-Show Talks and PillowTalks, and in 2008 a Jonas Lundqvist/John Lindquist photography exhibit was a notable feature in the Ted Shawn Theatre lobby, highlighting TMP dancers.

Trey McIntyre comments, “There is a great poetry to TMP having its final performance as a full-time dance company at Jacob’s Pillow. Ella was one of the very first presenters to take a chance on us, both before we were a company and then again as we went full time. That kind of support had a tremendous impact on where we have gone and what we have been able to achieve and I will be forever grateful.”

Video clips from past TMP performances can be seen at Jacob’s Pillow Dance Interactive:

2014 FAREWELL PERFORMANCES AT THE PILLOW

Called “engaging and provocative” by Karen Campbell of The Boston Globe, Trey McInytre’s dances overflow with fresh intelligence, unabashed physicality, and sprit. TMP’s farewell program features a new work inspired by the surreal imagination of writer and illustrator Edward Gorey and his characteristic pen-and-ink drawings. Performances also include the East Coast premiere of Mercury Half-Life, which is set entirely to the music of the legendary rock band Queen and includes beloved ballads “We Will Rock You” and “We Are The Champions” as well as lesser known songs such as “Love of My Life” and “Millionaire Waltz.”  Tickets: $69, $59, $39.

Tickets for Trey McIntyre Project at Jacob’s Pillow go on sale to the public April 1.  Jacob’s Pillow Members can order as early as January 13, depending on level.

Full Schedule Including 200+ Free Events: Further programming announcements will be made in April for more than 200 free events, including Inside/Out performances, PillowTalks, and exclusive exhibits. For ticketing or schedule questions, call the Box Office at 413.243.0745.

Jacob’s Pillow, celebrating its 82nd Festival in 2014, is a National Historic Landmark, recipient of the National Medal of Arts, and home to America's longest running international dance festival. Each Festival includes more than 50 national and international dance companies and 350 free and ticketed performances, talks, tours, classes, exhibits, and events. The School at Jacob’s Pillow, one of the most prestigious professional dance training centers in the U.S., encompasses the diverse disciplines of Ballet, Cultural Traditions, Contemporary, and Jazz/Musical Theatre Dance, as well as an Intern Program in various disciplines of arts administration, design, video, and production. The Pillow’s extensive Archives, open year-round to the public, chronicle more than 80 years of dance in photographs, programs, books, costumes, audiotapes, and videos. Year-round Community Programs enrich the lives of children and adults through public classes, residencies in area schools, and an extensive schedule of free public events. Through Jacob’s Pillow Curriculum in Motion®, a nationally-recognized program, artist-educators work with Berkshire County teachers and students grades K-12, transforming curricula such as biology, literature, and history into kinesthetic and creative learning experiences. Creative Development Residencies, in which dance companies are invited to live and work at the Pillow and enjoy unlimited studio time; choreography commissions; and the annual $25,000 Jacob’s Pillow Dance Award all support visionary dance artists and choreographers. Virtual Pillow is aimed at expanding global audiences for dance and offers the opportunity to experience dance and Jacob's Pillow from anywhere in the world via online interactive exhibits, global video networks, and social media. As part of the Virtual Pillow initiative, Jacob’s Pillow Dance Interactive is a curated online video collection of dance highlights from 1936 to today. On March 2, 2011, President Obama honored Jacob’s Pillow with a National Medal of Arts, the highest arts award given by the United States Government, making the Pillow the first dance presenting organization to receive this prestigious award. For more information, visit www.jacobspillow.org.