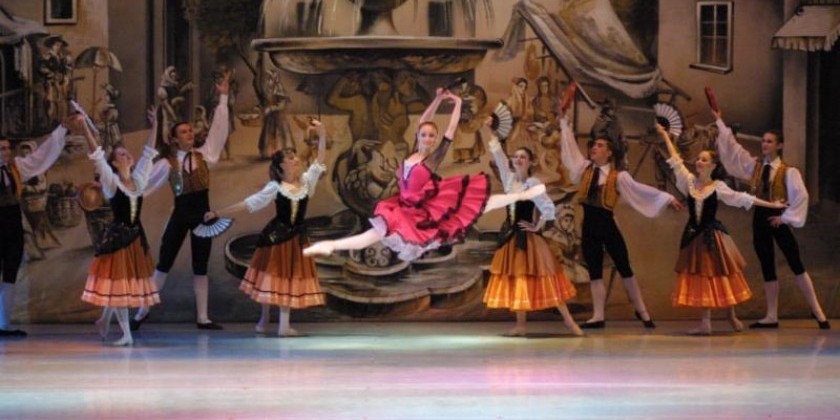 Brooklyn Center for the Performing Arts at Brooklyn College presents

Brooklyn Center for the Performing Arts at Brooklyn College continues its 60th Anniversary Season with Moscow City Ballet's Don Quixote,inspired by Miguel de Cervantes' classic story of valiant knights and old-fashioned romance, on Sunday, March 15, 2015 at 3pm. Tickets are $36-45 and can be purchased at BrooklynCenter.org or by calling the box office at 718-951-4500 (Tue-Sat, 1pm-6pm).

Based on an episode from Cervantes' famous novel, Marius Petipa's whimsical and romantic Don Quixote follows its title hero as he travels to Barcelona in pursuit of honor and the lovely Dulcinea. Accompanied by Ludwig Minkus' colorful score, the world-touring company led by Ludmila Nerubachtchenko, vividly depicts the joyous and comedic adventures of Don Quixote and his squire Sancho Panza.

The return of the Moscow City Ballet to the United States in March, 2015 is a tribute to the founding artistic director and choreographer Victor Smirnov-Golovanov, who passed away in April, 2013.

The Moscow City Ballet was founded in 1988 by distinguished Russian choreographer Victor Smirnov-Golovanov and his wife, Ludmila Nerubachtchenko. The company was the outcome of the reforms in post-Soviet Russia of that time. It is a private enterprise, and is not subsidized by the government. The company's first international tour appearance was in 1989 in Seoul, Korea. Its success outside of Russia makes it one of Russia's most extensively touring ballet companies. Since 1988, Moscow City Ballet has appeared in Belgium, Cyprus, Egypt, Holland, Hong-Kong, Ireland, Israel, Japan, Estonia, Peoples Republic of China, Philippines, Republic Korea, R.O.C. Taiwan, Singapore, United Kingdom, United States, and, naturally, in Russia itself.

The company's greatest success has been in the United Kingdom where it has given more than 1000 performances since 1991, accompanied by the National Ballet Orchestra. Considering classical ballet to be an important part of the national heritage of Russia, Victor Smirnov-Golovanov aimed to bring the company's performances to as wide a public as possible, especially the new generation of ballet-going youngsters.

Smirnov-Golovanov's own productions, as well as older versions of the classical ballets, all share a clearly-defined style, ideas and choreographic integrity, setting high performance standards for himself, and the company. Moscow City Ballet is renowned for the perfection of its corps de ballet in the best traditions of the Russian school of classical ballet. The company's unique style is ensured by the unceasing efforts, both in production and rehearsal, of its new artistic director, Ludmila Nerubachtchenko.

Founded in 1954, Brooklyn Center for the PerformingArts at Brooklyn College presents outstanding performing arts and arts education programs, reflective of Brooklyn's diverse communities, at affordable prices. Each season, Brooklyn Center welcomes over 65,000 people to the 2,400 seat Walt Whitman Theatre, including up to 45,000 schoolchildren from over 300 schools who attend their SchoolTime series, one of the largest arts-in-education programs in the borough. In recognition of its commitment to quality family programming, Brooklyn Center for the Performing Arts has been recognized as both Brooklyn's Best Theater or Theater Group for Kids and Brooklyn's Best Place for Family Bonding by ParentsConnect Parents' Picks Awards. In 2014-15, Brooklyn Center celebrates its 60th Anniversary Season of presenting world-class performances on the Brooklyn College campus.