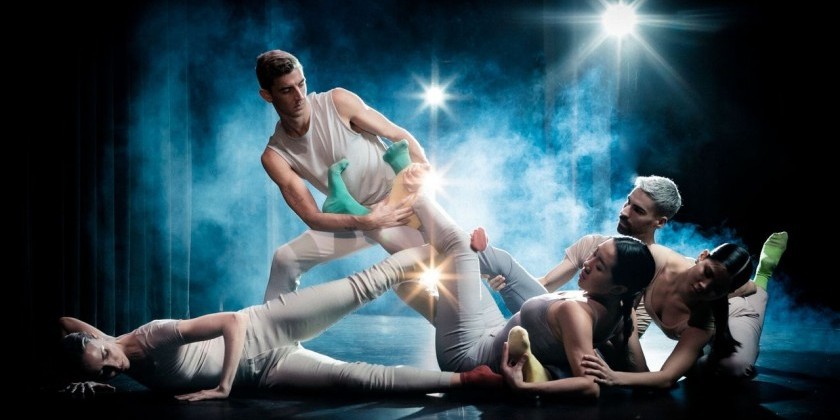 The CUNY Dance Initiative and John Jay College, in collaboration with Pigeonwing Dance, present the World Premiere of Gabrielle Lamb's Plexus: a work in knots on Friday, February 7, 2020 at 7:30pm at the Gerald W. Lynch Theater at John Jay College, 524 W. 59th Street, NYC. Tickets are $25 ($15 students/seniors)and can be purchased at https://www.pigeonwingdance.com/pwd/plexus.

In Plexus: a work in knots, Princess Grace Award-winning choreographer Gabrielle Lamb creates a complex ecosystem of interdependent bodies, a mysterious network of fluctuating loyalties built upon an unsteady balance of power. This world premiere is performed by the seven members of Pigeonwing Dance - Lamb's own NYC-based company - and set to a commissioned electroacoustic score from composer James Budinich that mixes traditional instruments with sounds from found objects.

"Plexus explores and embodies the importance of interdependence," said Lamb. "Western culture has traditionally prized individuality, encouraging humans to sever our obligations to each other---then further dividing us into a separate body and mind. This work reintegrates body and mind, then coordinates multiple bodies as linked, interlocking parts of a larger whole."

"This was full-body dancing, not in an aggressive sense but in that every limb and finger and eyelash of every dancer was engaged in expression."

Gabrielle Lamb, the winner of a Princess Grace Award, is an NYC-based choreographer. A native of Savannah, GA, she was a longtime soloist at Les Grands Ballets Canadiens, touring the world in works by classical and contemporary masters. DANCE Magazine described her as "a dancer of stunning clarity who illuminates the smallest details-qualities she brings to the dances she makes, too". Her work has been presented by the Royal Winnipeg Ballet, BalletX, Ballet Collective, Sacramento Ballet, Ballet Austin, Ballet Memphis, Jacob's Pillow, and Dance on Camera at Lincoln Center. She has won fellowships and competitions at Hubbard Street Dance Chicago, Milwaukee Ballet, the Banff Centre, and NY City Center, as well as the S&R Foundation's Grand Prize Washington Award. In 2018, she was selected to create for ABT's Choreographic Incubator.

James Budinich composes music inspired by minimalism, Croatian folk traditions, and American popular music. He has written for orchestra, voice, chamber ensembles, solo instruments, and electronics, and has worked with ensembles such as the Momenta Quartet, Yarn/Wire, the Lontano Ensemble, Roomful of Teeth, and Pigeonwing Dance. In 2017, he was commissioned by Ensemble Móbile; the resulting trio (Embrace for flute, violin, and guitar) premiered in Brazil as part of their 2017-18 season. James is currently studying towards his PhD in Composition at Duke University, having previously earned his Master of Music in Composition from Binghamton University.

Pigeonwing Dance, founded by Gabrielle Lamb in 2016, seeks the coordinates where beauty turns to awkwardness and tension dissolves into ease. Murmurations, accidents, and chance encounters are caught, preserved, and folded into dance. These moments of improvisatory abandon are counterbalanced by hours of calculation, revealing intricate structures of architectural precision.

The world premiere of Plexus: a work in knots is made possible by commissioning a grant from the O'Donnell-Green Music and Dance Foundation, with additional support from the S&R Foundation and the Bossak/Heilbron Charitable Foundation. James Budinich's score was commissioned by the Charles and Joan Gross Family Foundation. This project is also made possible with public funds from Creative Engagement, supported by the New York City Department of Cultural Affairs in partnership with the City Council and administered by Lower Manhattan Cultural Council. LMCC.net

The projectis supported by the CUNY Dance Initiative (CDI), a residency program that opens the doors of CUNY campuses to professional choreographers and dance companies. CDI receives major support from the Howard Gilman Foundation and the Mertz Gilmore Foundation. Additional support is provided by the Jerome Robbins Foundation, the SHS Foundation, the Harkness Foundation for Dance, and Dance NYC's New York City Dance Space Subsidy Program, made possible by the Andrew W. Mellon Foundation. CDI is spearheaded and administered by the Kupferberg Center for the Arts at Queens College.  www.cuny.edu/danceinitiative

Since opening its doors in 1988, the Gerald W. Lynch Theater has been an invaluable cultural resource.  The Theater is a member of CUNY Stages, a consortium of 16 performing arts centers located on CUNY campuses across New York City and the CUNY Dance Initiative. The Theater hosted events in the Lincoln Center Festival since its first season in 1996, and subsequent Mostly Mozart & White Light Festivals, as well as the New York City Opera, Mummenschanz, and the World Science Festival. Live and recorded events including Inside the Actor's Studio, Carnegie Hall Neighborhood Concerts, Comedy Central Presents, the American Justice Summit, and the NYC Mayoral Democratic Debates have thrilled audiences here. The Theater is the perfect space for premiere galas, conferences, international competitions, and graduations.  For more information, and a schedule of events, please visit www.GeraldWLynchTheater.com.