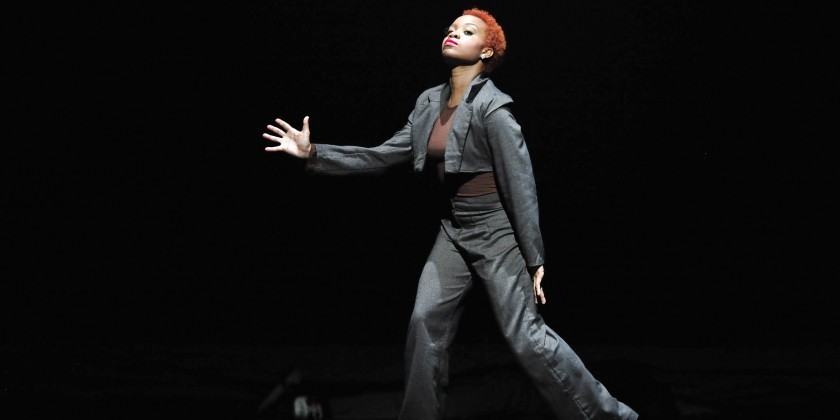 CAMILLE A. BROWN & DANCERS TO EMBARK ON NORTHEAST TOUR IN THREE CITIES

NEW YORK, March 13, 2014 - Camille A. Brown & Dancers, recognized for its visceral movement and unflinching approach to comedic and controversial themes, will embark on a 3-city Northeast tour, starting this weekend. The company is to visit Boston, Washington D.C. and Philadelphia in March and April to perform Camille A. Brown’s acclaimed 2013 Mr. TOL E. RAncE, as well as other repertory favorites. The company will be presented by World Music/CRASHarts at the Institute of Contemporary Art in Boston on March 14-15, The Atlas in Washington D.C. onApril 5-6, and Painted Bride Arts Center in Philadelphia on April 11-12. D.C and Philadelphia performances will feature the full version of Mr. TOL E. RAncE and also includes live piano accompaniment by Scott Patterson, playing an original eclectic score—composed by Patterson, Brandon McCune, Jonathan Melville Pratt and Kurt “KC” Clayton.

Mr. TOL E. RAncE has toured throughout the U.S. during 2013 to sold-out audiences from the Whitebird Uncaged Series in Oregon to North Carolina’s American Dance Festival. Prior performances also took place at The Kumble Theater in Brooklyn, NY, The EGG in Albany, NY, ODC Theater in San Francisco, The Yard in Massachusetts, Kelly Strayhorn Theater in Pittsburgh, PA Pennsylvania, and premiered at NYC’s The Kitchen in April of 2013.

“In today’s society we’re all dealing with the same issues one way or another; this connection is what inspires me to create work that promotes understanding and transformation” says choreographer Camille A. Brown. “We’ve been humbled by the impact TOL E. RAncE has had on all generations in the audiences and we are happy to continue the journey within the Northeast region.”

Mr. TOL E. RAncE embodies themes of American history as it celebrates African-American humor and masterfully intertwines comedy, live animation, theater and explosive dance, to examine minstrelsy in its past and even present forms. The piece sheds light on what happens to the human spirit behind the mask, creating a universal dialogue about perception and its influence on all races. The work is heavily influenced by Spike Lee’s film Bamboozled as well as Mel Watkins’ book “On The Real Side” and Dave Chappelle’s “dancing vs. shuffling” analogy.

·      Free post-performance Q&A with the company.

Tickets can be purchased through the World Music/Crash Arts Center - online. Prices for performances are $40 with reserved seating. Performances will run two nights - Friday, March 14, 7:30 p.m. and Saturday March 15, 8:00 p.m.

The Institute of Contemporary Art is located at 100 Northern Ave, Boston, 02210.  Paid parking is available in lots immediately adjacent to the ICA and public transportation is available via the Red Line to South Station. At South Station take the Silver Line to Courthouse stop.

The Theresa and Jane Lang Theatre is located on the Atlas Performing Arts Center property at 1333 H Street NE Washington, DC 20002. Visitors are highly encouraged to take public transportation. Extensive directions and other information can be found online.

The Bride is located at 230 Vine Street Philadelphia, PA 19106. Due to limited parking, public transportation is highly encouraged. Septa bus routes No. 17, 33, 44, and 48 run East to West on Market Street and No. 57 runs North on 3rd Street and South on 4th Street. Extensive travel information can be found online.

The Evolution of a Secured Feminine (2007)

This solo work is a portrait of a woman, who bursts into action, creating a witty and humorous portrayal of a character in the midst of vacillating between uncertainty and carefree expression. The candid journey becomes a force with no restrictions, while finding joy in the spontaneity of life and celebrating the limitless gift of being a woman.

Using Angela Davis’ book, Blues Legacies and Black Feminism: Gertrude “Ma” Rainey, Bessie Smith, and Billie Holiday, the writings of bell hooks, Toni Morrison (The Bluest Eye), and Melissa Harris-Perry, and community-based participatory research as inspiration, this work seeks to examine the politics of pleasure, the concept of patriarchy, and contemporary notions of beauty for black women and will also touch on the ambiguity and overlap of these topics.

Dedicated to the spirit and culture of New Orleans. Inspired by the events of Hurricane Katrina in 2005, this work is a celebration of the spirit and culture of the people of New Orleans. Second Line is a traditional brass band parade for weddings, social events, and most notably, funerals. Those who follow the parade dancing with high energy and spirit are known as the ‘second line’.

About Camille A. Brown & Dancers

Camille A. Brown & Dancers has been a palpable force in the national concert dance world for over 10 years. Directed with unfailingly clear vision by Camille A. Brown, the company draws upon modern, hip-hop, African and ballet aesthetics to make a personal claim on history through the lens of Brown’s contemporary female perspective. The company’s mission is to present authentic performances that foster dialogue among audience and local communities. The company has performed at The Joyce Theater, American Dance Festival, Jacob’s Pillow Dance Festival, Bates Dance Festival, City Center’s Fall for Dance Festival, Symphony Space and The Yard.

About Camille A. Brown

Camille A. Brown is an award-winning choreographer who blurs the space between theater and dance. Her prolific and vivid choreography entails more than a dozen dance repertory works and has launched her to Broadway’s stages, recently choreographing the 2012 Broadway revival of A Streetcar Named Desire, Shakespeare’s The Winter’s Tale and the upcoming Off-Broadway show Fortress of Solitude. Brown is a two-time Princess Grace awardee and the 2013 recipient of The International Association of Blacks in Dance Founders Award. She has been commissioned to create works for Alvin Ailey American Dance Theater, Philadanco, Urban Bush Women, Ballet Memphis and Hubbard Street II. Camille A. Brown & Dancers has toured throughout the U.S.

Black Girl (working title) was made possible by the New England Foundation for the Arts' National Dance Project, with lead funding from the Doris Duke Charitable Foundation and The Andrew W. Mellon Foundation, with additional support from the National Endowment for the Arts. Black Girl was also made possible by the New York State Council on the Arts with the support of Governor Andrew Cuomo and the New York State Legislature. Camille A. Brown is the recipient of a Princess Grace Foundation Works in Progress Residency Award, a Joyce Award with DANCECleveland, and she is a 2014 New York City Center Choreography Fellow.

The creation and presentation of Mr. Tol E. RAncE is supported by the National Endowment for the Arts in cooperation with the New England Foundation for the Arts through the National Dance Project (NDP). Major support for NDP is provided by the Doris Duke Charitable Foundation and the Andrew W. Mellon Foundation, with additional support from the Community Connections Fund of the MetLife Foundation. Support from the NEA provides funding for choreogra­phers in the early stages of their careers. This work was created, in part, during a Creative Development Residency at the Bates Dance Festival and Kingsborough Community College. This work was also funded by the New York State Council on the Arts with the support of Governor Andrew Cuomo and the New York State Legislature. Production residency for this work was supported by the National Dance Project of the New England Foundation for the Arts, with funding from The Andrew W. Mellon Foundation. This residency took place at The Grier School and Halbritter Center for the Performing Arts at Juniata College, Huntingdon, PA.