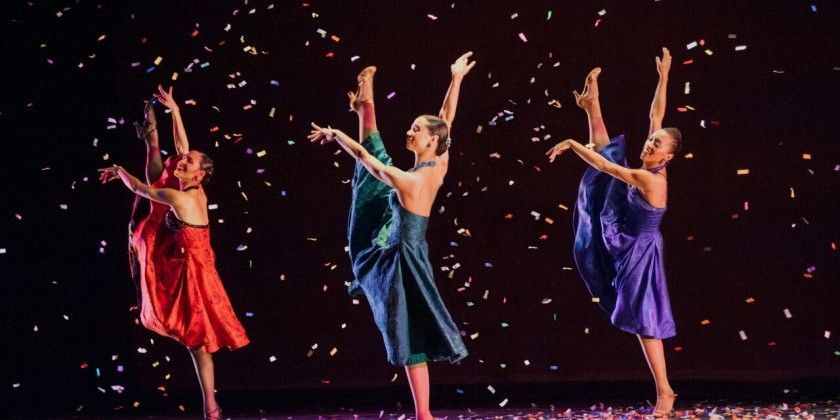 Celebrate Mamitas's Day with Ballet Hispánico, the premier Latino dance organization in the United States! Experience a fun-filled journey through Latin American dance and culture at our En Familia performance at United Palace, 4140 Broadway & W. 175th Street. Tickets are $15-25 (free for children 12 and under) and are available at https://www.unitedpalace.org/upca-calendar/eventdetail/5046/-/ballet-hispanico-en-familia. The event will include a special appearance by Univision 41 news anchor Katiria Soto.

Doors open at 2:00pm for families to enjoy music and children's crafts in the grand foyer. The first 100 people to arrive may join Ballet Hispánico Artistic Director & CEO Eduardo Vilaro on stage for Baila Con Mami (Dance with Mommy) at 2:30pm. Guests will take a journey through our Latino dance legacy from the cha cha to merengue. Whether you want to bring your mom as a special gift or your favorite dance partner, this class will get you up, energized, and moving to the beat in no time!

The fun-filled program will include a flamenco performance by students of the Ballet Hispánico School of Dance, as well as excerpts from Ballet Hispánico repertory performed by members of BHdos:

Club Havana is Latin dance at its best! The intoxicating rhythms of the conga, rumba, mambo, and cha cha are brought to life by choreographer Pedro Ruiz, himself a native of Cuba, as he imagined his very own "Club Havana."

In Con Brazos Abiertos, Michelle Manzanales explores the iconic Mexican symbols that she was reluctant to embrace as a Mexican-American child growing up in Texas with humility, nostalgia, and humor. Intertwining folkloric details with a distinctly contemporary voice in dance, set to music that ranges from Julio Iglesias to rock en español, Con Brazos Abiertos is a fun and frank look at a life caught between two cultures.

Espiritu Vivo, an exciting collaboration between Ballet Hispánico and Brooklyn-based choreographer Ronald K. Brown, explores the intersection of the African and Latino diasporas in the Caribbean and Latin America. Using narrative, tradition, and dance forms from these regions, the work explores the stages of grief after tragedy: the news, prayer, spring, and new day.

From one of today's most sought-after choreographers, Annabelle Lopez Ochoa's Línea Recta is a powerful and resonant work that explores an intriguing aspect of flamenco dance: the conspicuous absence of physical partnering. While maintaining the integrity and hallmark passion of the genre, Annabelle Lopez Ochoa imagines an original and explosive movement language premised upon the theme of partnership and performed to flamenco guitar by Eric Vaarzon Morel.

In the fall of 1970, Tina Ramirez looked at her neighborhood on the Upper West Side of Manhattan and envisioned a world where the young Latino children playing on the street could find a way to a world of art and professional opportunities. Her vision grew into a small grassroots dance and education organization that gave a voice to those young students at a time when Latinos were either absent or stereotyped in American culture. Today, Ballet Hispánico is a catalyst for change and diversity with tremendous impact, nurturing artists, students and future leaders. An acclaimed choreographer and former member of the Company, Artistic Director & CEO Eduardo Vilaro has brought a dynamic vision of social equity, cultural identity, and quality arts education. Under his leadership, Ballet Hispánico's Company has received national and international praise, performing to ovations around the world. The School of Dance, located in the same building where Ms. Ramirez began her mission, is thriving and widely respected. Ballet Hispánico's community arts partnerships have transformed the lives of thousands of young people in New York, Los Angeles, Houston, Miami, New Orleans, and Chicago. By bringing individuals and communities together to celebrate and explore Latino cultures through dance, Ballet Hispánico is now a beacon of hope, tolerance, and artistic excellence.

Mr. Vilaro's own choreography is devoted to capturing the spiritual, sensual and historical essence of the Latino cultures. He created over 20 ballets for Luna Negra and has received commissions from the Ravinia Festival, the Chicago Sinfonietta, the Grant Park Festival, the Lexington Ballet and the Chicago Symphony. In 2001, he was a recipient of a Ruth Page Award for choreography, and in 2003, he was honored for his choreographic work at Panama's II International Festival of Ballet. Mr. Vilaro was also inducted into the Bronx Walk of Fame in 2016 and was awarded HOMBRE Magazine's 2017 Arts & Culture Trailblazer of the Year.

KATIRIA SOTO, a native of Puerto Rico, began her career in television in 2001. Prior to joining WXTV Univision 41, Soto was a co-host for WAPA TV/WAPA América's program "Wapa a las Cuatro" (Wapa at Four) in Puerto Rico. At WAPA TV, she also served as host for "De Película" (Movie Show) and "Transformación Total" (Total Transformation) programs. In addition, Soto worked as a freelance news reporter for Telemundo's "Telenoticias."

About United Palace of Cultural Arts

The United Palace of Cultural Arts (UPCA) is an independent 501(c)(3) nonprofit founded in 2012 as an arts and cultural center at the United Palace, a transformational organization and venue that fuses culture, spirituality, and entertainment in Manhattan's 4th largest theatre. As a community resource, we provide access and exposure to progressive programming, including cultural events, arts education, movie screenings and community space that empowers the individual to nurture the artist within and emboldens children, adults, and families through exploration and open exchange. For more information, visit UnitedPalaceArts.org.