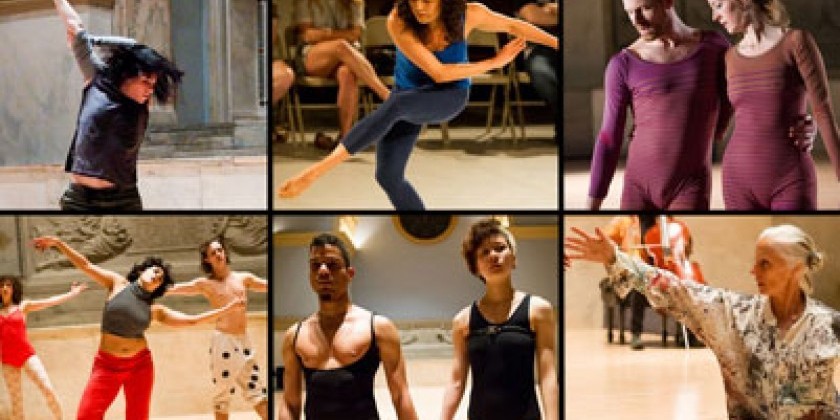 Please join us for two evenings of work by current
Movement Research Artists-in-Residence.

This is an evening of works in progress.
IT IS NOT OPEN FOR REVIEW

Michelle Boulé is a dance artist, teacher and BodyTalk practitioner based in Brooklyn. Her work has been presented by ISSUE Project Room (Emerging Artist Commission), Mount Tremper Arts, and Dance and Process at the Kitchen, and has also been shown in group shows at CPR, Movement Research Festival at Judson Church, Food for Thought at Danspace Project, and Catch Series. As a performer, she has worked with Miguel Gutierrez and the Powerful People since 2001, receiveing a "Bessie" for her performance as James Dean and collaboration in the creation of Last Meadow. Other artists she has worked with most recently include Deborah Hay, John Jaspserse, John Scott, composer Okkyung Lee, and director/playwright Rosie Goldensohn. She is on faculty at The New School and at Movement Research, and has also taught at various universities and dance institutions in North America, Europe, Australia and Asia. www.michelleboule.com

Courtney Krantz has an MA in Media Studies from The New School and a BA from Sarah Lawrence College. She makes work in the still and moving image as well as installation and performance-based pieces/documents. Her work has recently been shown at Movement Research at Judson Church, Anthology Film Archives (NYC), Millenium Film Workshop (NYC), and Festival Novog Filma i Videa (Serbia). www.courtneykrantz.com

Tara O'Con's work has been presented by Dance Theater Worskhop (Fresh Tracks Residency 2007), Danspace Project, The Chocolate Factory Theater, and most recently as part of the River To River Festival produced by The Lower Manhattan Cultural Council (2012) and also the New York Live Arts Studio Series Residency (2013). She thrilled for the opportunity to develop this work further while being a Movement Research Artist in Residence. Outside of the the world of making, she is also a long time collaborator/performer, with mvworks and Third Rail Projects. She is currently performing regularly in Third Rail Project's immersive theater experience, Then She Fell. www.taraocon.wordpress.com

Saúl Ulerio is a classical artist from the Dominican Republic. Ulerio has been making works and performing in the mediums of sound and dance performance in New York City since 2006. Since then, Ulerio initiated a 25-year exploratory choreographic process rooted through his passion for the art of music, cinematography and opera. Ulerio's work has been seen at New York Live Arts, Dance New Amsterdam, Danspace Project's Draftwork, Dixon Place, BAAD and Teatro IATI. Ulerio was a 2011-2012 New York Live Arts Fresh Tracks Artist and he is currently a 2012 Movement Research Artist in Residence. www.saululerio.org

Larissa Velez-Jackson is a Brooklyn-based choreographer and multimedia artist. She has presented work at numerous NYC venues such as: Dixon Place, People's Improv Theatre, New Museum of Contemporary Art, Dance Theater Workshop, Danspace Project Fall Platform '10 and American Realness Festival '11 at Abrons Arts Center. In 2011, she launched a new musical collaboration with her husband Jon Velez-Jackson called Yackez, "The World's Most Loveable Hip Hop Duo." In 2012 she attended the danceWEB scholarship program of Impulstanz Int'l Dance Festival by way of the '12 Jerome Foundation Travel and Study Grant. Velez-Jackson currently is a Movement Research Artist in Residence '12-'13 and a SPARC resident '13 with the Lower Manhattan Cultural Council. www.larissavelez.com