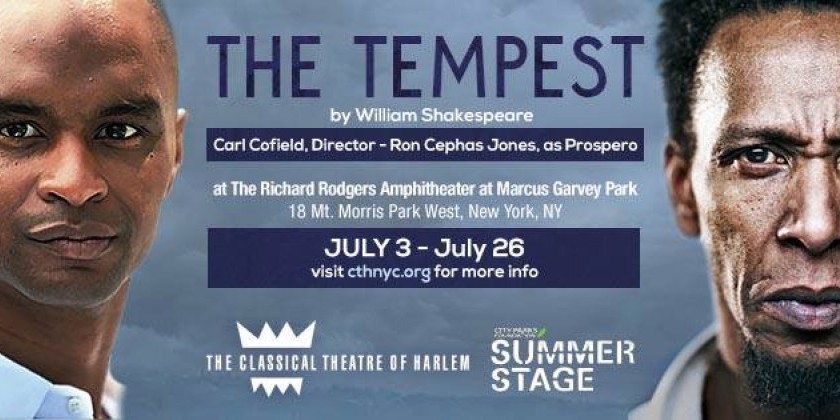 SummerStage and the Classical Theatre of Harlem proudly present William Shakespeare’s The Tempest, directed by Carl Cofield. This rendition of the famed play sets Prospero’s magical island on the enchanting island of Hispaniola, home to the Dominican Republic and Haiti – two tiny nations with storied battles for independence. With the characters of Ariel and Caliban representing the same longing for freedom and fighting spirit of Haiti, the play highlights the dynamics of freedom and captivity, imprisonment and rebellion, and authority and tyranny. Director Cofield describes the play as, “a theatrical gumbo, with an intricate blend of usurping villains, youthful romance, music, humor, conspiracy and sensitivity.”

The production will run from July 5 through July 26, with previews on July 3 & 4. There will be no performance on July 7. Performances are Tuesday, Wednesday, Thursday, Saturday and Sunday at 8:00 p.m. Friday’s curtain is at 8:15 p.m., following Jazzmobile free concerts at 7:00 p.m. The venue opens for seating at 7:00 p.m. each night and 6:30 p.m. on Fridays. There are no performances on Mondays. All performances are free and no tickets are required.