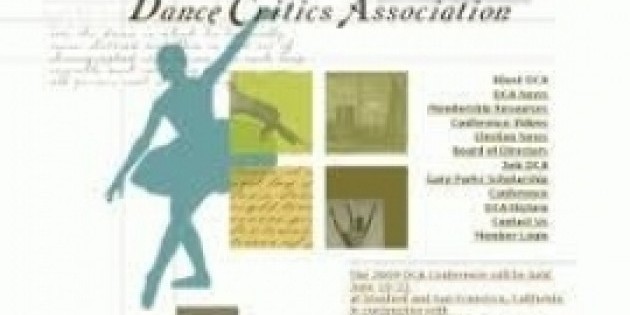 Special Panel on Dance and TV "So You Think You Can Ignore Dance on TV?" led by Lisa Traiger , and A panel on the state of dance writing today. Panelists include Robert Greskovic, Leigh Witchel, Christine Jowers and moderator Robert Johnson.

So You Think You Can Ignore Dance on TV?
A provocative discussion about dance on television is among the panels planned for the upcoming Dance Critics Association 2012 Conference, “21st Century Dance Writing: Multimedia, Multiarts, Multitasking,” scheduled for June 22-24 in New York City.

Panel Description: As dance critics we largely focus our energies, our editorial space and our knowledge on art or concert dance. For the most part, our field has rarely taken time to examine in depth dance in popular culture, especially on television. And yet television dance, from variety shows like “The Ed Sullivan Show” to the teen dance shows like “American Bandstand” and “Soul Train” to music videos by artists like Lady Gaga and Beyonce has been a staple in the diets of American audiences. Is it time to for dance writers and critics to step into the fray and find a way to write about dance on television including programs like “So You Think You Can Dance,” especially since these television viewers represent our greatest audience for dance in America? As dance critics should we and can we use our critical voices to shape the conversation?


Panels planned for the DCA's 2012 conference will look at some of the current issues impacting the field of dance writing and dance writers.

Other panels scheduled include:

* "Dance/Talk," a panel exploring choreographers who use language in their work. Panelists include choreographer Jennifer Muller.

Other scheduled panels include sessions on the role of the dance critic - snark or praise, and how to survive as a dance writer.

The conference will begin with a keynote panel led by Virginia Johnson, artistic director of the Dance Theatre of Harlem on how changes in the cultural landscape have impacted changes in dance coverage.

DCA 2012 Conference Schedule at a Glance
Friday, June 22
9 am: Registration opens
9: 45-10:45 am: Keynote panel discussion led by Virginia Johnson, Artistic director, Dance Theatre of Harlem
11-12:30 pm: The state of dance writing today
1:30-3 pm: Dance/Talk - a panel focusing on choreographers who use language and their approaches to making work
3:30-4 pm: Calliope Award presentations
4:15-5:30 pm: Session on the importance of preserving the papers of dance writers

Saturday, June 23
9:30-11 am: Survivor: Dance Writer - a panel on how to make it work
11:30-12:30 pm: Senior Critics Award Lecture by Nancy Goldner
12:30-1:30 pm: Lunch break
1:30-3 pm: Digital Dance and the 21st century Dance Writer - a panel that will look at dance writing in the 21st century, from reviewing from DVD's, to the impact of blogging, Twitter, Facebook and YouTube
3:30-5 pm: Impact of dance on television - a panel looking at the impact of dance on television with shows like “So You Think You Can Dance.”