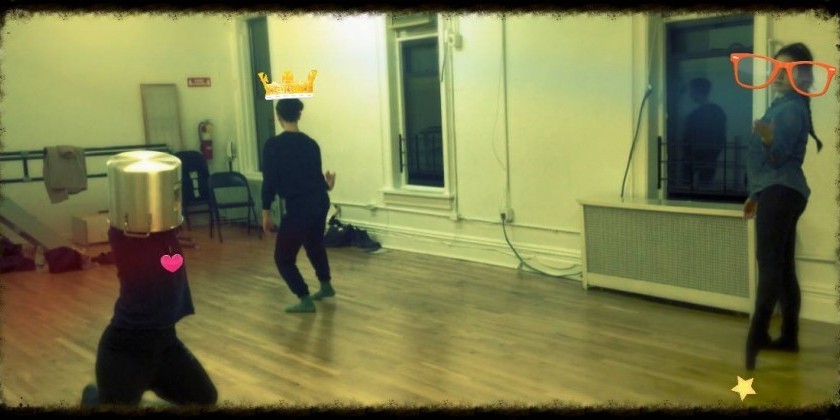 Initiated in the early 90s, this series focuses on emerging, up & coming contemporary dance choreographers who are refining/defining their distinctive styles. Curated by Doug Post.

Jenna Sofia trained at the London Academy of Music and Dramatic Art. She has played theatres from London's Southwark Playhouse to LaMaMa ETC here in NYC. As an actress, she has appeared in various theatre, film & tv projects, most recently in Girl/Group: A Daughter's Tale at the Jersey City Loews, and The Grid, NYCIFF's winner of Best TV Pilot, 2014. In 2013, she hosted, co-wrote and co-produced an online music news show, BalconyTV Update. Jenna is currently writing a full-length, magical musical comedy, which will be workshopped later this year. It has been a joy creating this piece with Tony. Many thanks to him, her family and friends for their love & support.

Tony Bordonaro is a New York based choreographer director and performer. He is thrilled to share his latest work with the Dixon Place family. For the last 3 years Tony has worked with Punkdrunk on numerous events and in their off-broadway hit Sleep No More. Tony was honored to get to work with pioneer performance artist Robert Whitman in his theatrical production Passport.  Dance: Douglas Dunn and Dancers, 10HL, HT Chen and Dancers, Tze Chun Dance Company, Daniel Gwirtzman Dance Company. Film: Mo, Boys Against Girls, Manhattan Romance. TV: One Life to Live. BFA Mason Gross School of the Arts, Rutgers University.TonyBordonaro.com

Contestants compete against each other for the title of prettiest lady. Watch as these contestants answer tough questions, perform dazzling displays of Talent, and strip down to their underpants.

Hanah Fazio runs Studio 312 in Bushwick.  She is a yoga instructor/Reiki healer/tarot reader/performer/artist passionate about making art that inspires change.

The Battle of Central Park

Created by Theater 4the People

The Battle of Central Park explores the contradictory and captivating relationship of two public figures possessed by power and a love of New York City. The ideological zeal of Papp and the dominant structuralist power of Moses are brought to life on the stage through the expression of the human body. Equal parts memory play and historical drama, this piece tells the fascinating story of  two iconic and divisive men through a lens of imagination and wonder.

Director Jamie Watkins, Choreographer Annalisa Ledson and Composer Mark Van Hare have been developing original work since 2011. Their work has been seen at Dixon Place, HERE, The Tank, National Choreography Month, Epic Theatre Ensemble, and as the resident artists at Opera House Arts in Stonington, Maine. This piece marks their third collaboration with Playwright Andrew Massey.

Direction and performance by Rebecca Lloyd-Jones and Julia Cavagna

Johanna LjungQvist-Brinson started dancing at the age of 3 in Boras , Sweden  . She graduated from DOCH , The University of Dance and Circus , Stockholm , Sweden ( BFA in  Dance and Dance Pedagogy.) Since then Johanna has been teaching,performing and choreographing through Europe and US. She taught in Paris at Academie International De La Dans , NYC at Phil Blacks. In 2008 Johanna founded her school , Delaware Dancers and in May 2013 she started Hanna Q Dance Company. In February they performed in The Soaking WET Series,curated by David Parker (The Bang Group -The West end Theater,NYC)

Direction and performance by Rebecca Lloyd-Jones and Julia Cavagna

Two women seek connection and acceptance amidst their cultural & linguistic differences, criticisms and expectations from the world.

Or How I Became an Ice Princess

Created by I AM A BOYS CHOIR

I AM A BOYS CHOIR is Adam Rigg, Chris DeVita and Kate D'Arcus Attwell

Or How I Became An Ice Princess is the newest work from performance collective I AM A BOYS CHOIR. With a dash of camp, and intense physicality akin to an ice-skating competition, the team delves into the body myth of the female athlete, the writings of philosopher and gender theorist Judith Butler, and the process of earning institutional validation by conforming to specific identity markers in regards to race, class, and gender. Also mini trampolines, violence, sequins, and maybe (just maybe) Honey Boo Boo.

Cody Schreger is a New York City native performing artist, choreographer, aerial instructor and health coach.. She has studied a wide range of creative arts from modern and flamenco dance to clown, Commedia Del' Arte, traditional theater, on camera acting, voice over, gymnastics and aerial arts.  After graduating from Bard college with a B..A in Dance Choreography, Cody went on to perform with companies such as Cirque Dreams and the Metropolitan Opera, corporate clients such as Mercedes Benz , TV shows such as Law and Order and at the international circus festivals of Albacete, Spain and Latina, Italy.  When she is not performing, Cody teaches ongoing aerial arts classes in Williamsburg, Brooklyn and coaches private health clients.

An inspiring dance project where each month 10 emerging dance companies are given up to 10 minutes to showcase their work.

Holly Maddock, When birds look into houses, what impossible worlds they see

Javier Padilla, This is the city of spare parts

Awaken Dance Theater, Only in America

Initiated in the early 90s, this series focuses on emerging, up & coming contemporary dance choreographers who are refining/defining their distinctive styles. Curated by Doug Post.

Caitlin Dutton graduated from SUNY Purchase and studied briefly in London. Her first independent choreographic project gave downtown Savannah, GA a week of guerrilla site-specific performances. After then running off to California to dance for Backhausdance, Caitlin returned to NYC and currently dances for Amalgamate Dance Company. In 2014, Caitlin embarked on a grand adventure dubbed caitlin+dancers. In addition to random sightings in Savannah, Caitlin has shown work at Dance Theater Workshop (NYLA), Triskelion, Chen Dance Center, the Falchi Building hosted by chashama, the Robin Howard Dance Theatre (London) and unconventional NYC spaces in cahoots with the Hoover Dam Collective.

Dixon Place and the feath3r theory Present the World Premiere:

Another deeply-superficial, gender-bending, race-shifiting, multi-medium 'Artsploitation' from the creator of Any Warhol’s DRELLA ( I Love You Faye Driscoll). the feath3r theory Presents: Andy Warhol's 15 (Color Me, Warhol) was commissioned by and first presented at Dixon Place in New York City with public funds, in part, from the New York State Council on the Arts with the support of Governor Andrew Cuomo, the New York City Department of Cultural Affairs in partnership with the City Council, and private funds by the Jerome Foundation and the Mertz Gilmore Foundation.

RAJA FEATHER KELLY is a dancer and choreographer, acclaimed equally for his  technical virtuosity, stage presence, depth of emotional and visual sensitivity, and intellectual insight of the contemporary pop culture in which he often finds inspiration for his own work. His versatile performing skills – displayed, among others, in numerous productions by David Dorfman Dance, zoe | juniper, Reggie Wilson, in a 2010 BESSIE-winning piece THE RADIO SHOW by Kyle Abraham/ Abraham.In.Motion, and in collaborative projects with Zoe Scofield, Tzveta Kassabova, and Paul Matteson – garnered him critical acclaim in the U.S. and abroad.

An English and dance major with deep interest in both verbal and nonverbal forms of expression, Raja Kelly founded his performance company the feath3r theory after writing a novel of the same name (still in development). As a teacher, he has been a Guest Artist at New York University, The University of Virginia, Memphis University, University of Florida, Dance House in Melbourne, Australia and most recently a Guest Lecturer at the University of Maryland, College Park, and a Guest Choreographer at Princeton University.

Honors, residencies and grants awarded to his work include 2010 and 2009 Bates Dance Festival Merit Scholarships, 2013 Bates Dance Festival Emerging Choreographer in Residence, 2014 LMCC Workspace Recipient, Princeton University Guest Choreographer Position, 2013 and 2014 University of Florida Choreographic residencies. He has also been a co-producer of the summer dance series RoofTop Dance and is a contributing writer for The Dance Enthusiast. Off the stage, Kelly is the company manager for Reggie Wilson/ Fist and Heel Performance Group.

THE FEATH3R THEORY | TF3T is a New York-based company that regurgitates pop-culture by distilling current phenomena into works of radical and surreal dance theater. Its artistic philosophy is built upon the principle of understanding dance as a visual art form, in which the aesthetics and ethics of each work play equally important part. Using movement/dance, performance, theater, art and media, TF3T amplifies the “everyday” into virtuosic and surreal worlds where the unlikely comes together and the unexpected breaks away. The goal is to achieve a new synthesis – a performance-centered environment for audiences to experience and experiment in.

The work of TF3T has been shown at many NYC venues known for their innovative curatorial approach, including Dance New Amsterdam, Triskelion Arts,  The Invisible Dog, Dixon Place, Movement Research at the Judson Church. In 2013, his solo 25 CATS premiered at The Kennedy Center’s Millennium Stage. Most recently his short piece JAMES was a part of DANCENOW festival at Joe’s Pub at the Public Theater.

by the Jody Oberfelder Projects

Get in the Pot

by the Jody Oberfelder Projects

The Brain Piece is a choreographed experience bridging art and science meant to inspire connections within the thinking body. Examining how neurons that wire together, fire together, Jody Oberfelder Projects invites audiences to shine a light on their own thinking process. Science and art lead us to connect with and experience the world.

Jody Oberfelder has choreographed an array of boldly physical dances including Social Dances, Tangram/Moved, and The Story Thus Far (all of which were Dixon Place Mondo Cane Commissions.) Other commissions include Stravinsky's Soldier's Tale  (Brooklyn Philharmonic) and Purcell’s Dido & Aeneas (Orchestra of St. Luke’s.) Honors include residencies and performances of her immersive work 4Chambers in an historic home on Governors Island and in Brooklyn at Arts@Renaissance. She has been awarded a Joyce Residency, a NYFA BUILD Grant, and funding from DCA, NYFA, and NEA. Oberfelder has taught at Middlebury College, Wayne State University, Moravian College, and Alfred University.  Oberfelder has directed eight films, screened in The Dance on Camera Festival (NY), Cinedans (Amsterdam), Indie Fest USA, Art Basel Festival (Miami), VideodanceBA (Buenos Aires), InShadow (Lisbon), among others. Oberfelder choreographed a 2014 Prada Commercial.

Get in the Pot
Emie Hughes Dance

A collaborative exploration of space in which static, everyday objects meet dynamic, moving bodies. Drawing from the choreographer’s experiences as a two-year-old climbing into cooking pots on the kitchen floor, this dance work-in-progress strives to capture the sense of play that comes alive in process.

Emie Hughes is a dance-maker, performer, and visual artist based in Brooklyn, NY. Originally from PA, she graduated Phi Beta Kappa from Dickinson College with her B.A. in Dance. At Dickinson, she was awarded the Weiss Prize for her choreography. In addition to making work, she works in production and arts administration.