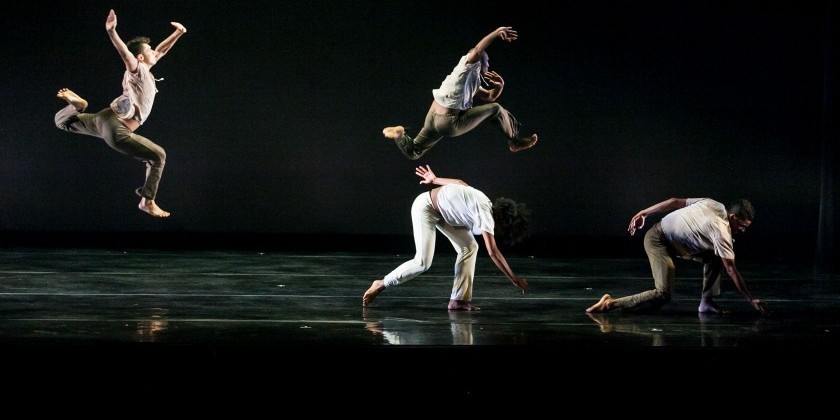 DanceBrazil / Forro in the Dark

Company:
DanceBrazil / Forro in the Dark

BRIC ANNOUNCES:
DANCEBRAZIL AT THE CELEBRATE BROOKLYN! PERFORMING ARTS FESTIVAL, PRESENTED BY SQUARESPACE AND IN PARTNERSHIP WITH BRAZIL SUMMERFEST, JUNE 20

BRIC is pleased to present a dance performance by DanceBrazil, an internationally renowned company led by Jelon Vieira, on Saturday, June 20. The free event (with a suggested $3 contribution at the gate) is presented by Squarespace and will take place at 7:30 P.M. at the Celebrate Brooklyn! Performing Arts Festival (Prospect Park Bandshell, 9th St. & Prospect Park West). DanceBrazil is internationally renowned for its contemporary dance pieces inspired by the rich cultural tapestry of Brazil. The evening-length program features Gueto and the New York premiere of Malungos, both choreographed by Vieira.

The evening will begin with a set by Forro in the Dark, a collective of New York-based Brazilian ex pats: Mauro Refosco (zabumba drum and vocals), Guilherme Monteiro (guitar and vocals) and Jorge Continentino (pifano flute, sax and vocals). Forró is the hip-swiveling, dance floor-filling, rural party music of Brazil’s northeastern states; Forro in the Dark takes this traditional form “to new heights by drawing on influences ranging from Enrique Iglesias to Beck” (NPR).

Premiered in 2014, Gueto is Vieira's testimony to the abiding vitality and humanity that sustain the people living in the many marginalized, disenfranchised communities in Brazil and around the world. Continuing this theme, Malungos takes its title from Brazil’s history of slavery. Almost five million Africans were enslaved in Brazil, all of whom were part of the Atlantic Slave Trade. These individuals who were imprisoned in the galleys of the slave ships developed strong bonds with each other on their long and arduous journey. On the ships, fellow prisoners referred to each other as “meu (my) malungo,” which connoted being a companion in the same condition, that is, of being enslaved. The malungos often formed small groups and, with communal strength, would go to great lengths to protect each other and even die for each other.  Although after abolition the term disappeared from use, in this piece Vieira explores the strength through unity and friendship that exists within Capoeira communities today and the undeniable influence the enslaved Africans had on Brazilian culture.

In 1977, DanceBrazil was founded byJelonVieira after evolving from grass-roots workshops at the Clark Center for the Arts in NYC. Alvin Ailey joined the board of directors in 1980 and helped focus the objectives of DanceBrazil, emphasizing the company’s ability to speak to a broad North American community. Within a few years, DanceBrazil premiered at Lincoln Center’s Avery Fisher Hall. In 1985, DanceBrazil premiered Orfeo Negro at the Riverside Dance Festival to critical and popular acclaim. DanceBrazil has enjoyed annual New York City Seasons at The Joyce Theater followed by touring globally. For thirty-eight years, DanceBrazil has thrilled audiences across the Unites States and throughout the world with its dazzling artistry, which is inspired by the cultural tapestry of Brazil. Whether in the streets or on stage in the most prestigious theaters, the dancers and musicians of DanceBrazil never fail to enthrall audiences with the company’s unique fusion of Afro-Brazilian movement, contemporary dance and Capoeira, the traditional dance/martial arts form that had its origins in Africa and evolved in colonial Brazil as a means of fighting enslavement.

In 2008, Jelon Vieira was awarded one of eleven National Heritage Fellowships, the country's highest honor in the folk and traditional arts. As founder and artistic director of The Capoeira Foundation and DanceBrazil, he and the late Loremil Machado were the first artists to bring traditional Afro-Brazilian dance and Capoeira to the United States over thirty years ago. He has devoted his life to sharing Afro-Brazilian culture with American audiences since 1977 when, together with Machado, he formed The Capoeiras of Bahia. That same year the late Alvin Ailey suggested he change the name of the company to DanceBrazil. It now makes over thirty years that Vieira has guided the company through breathtaking performances of Capoeira and Afro-Brazilian dance before audiences in Europe, Asia, and Brazil, as well as in the United States.

Mr. Vieira teaches Capoeira to people of all ages and from all walks of life in both Brazil and the United States. He has taught the soccer great Pele and American movie stars Wesley Snipes and Eddie Murphy. Although he resides in New York, Mr. Vieira spends several months a year in Brazil. One of his long term goals is to open a center for underprivileged children, using capoeira to build self-esteem and self-discipline and to begin moving these children off the streets and into the educational system and mainstream society.

In the United States, Mr. Vieira has taught in many residency workshops and has been a guest instructor at Yale University's African-American Studies Department and has also taught at many other universities and colleges including Oberlin College, Columbia University, Stanford University, Duke University and currently at NYU. He has worked with several American dance companies including Dance Theater of Harlem and Alvin Ailey. He has also worked closely with other cultural institutes in the United States such as the Caribbean Cultural Center in New York and the Carver Community Cultural Center in San Antonio, Texas. In 1993, after a decade of collaboration between DanceBrazil and the Carver Cultural Community Center, Mr. Vieira and Carver Center Director Jo Long decided to create Ilê Bahia de San Antonio, the House of African-Brazilian Arts. The organization was incorporated in 1993 to establish a professional level instruction and training center in the African-Brazilian performing arts. Special emphasis is placed on training at-risk, minority youth in a positive and culturally affirming activity.

FOR MORE INFORMATION ON THE ARTISTS:

About BRIC and the Celebrate Brooklyn! Performing Arts Festival

Since its founding as a not-for-profit organization in 1979, BRIC has been the driving force behind a number of Brooklyn’s most widely renowned and beloved arts and media programs. In the borough that is now this country’s foremost creative hotbed, BRIC is unparalleled in its combination of artistic excellence, programmatic breadth and genuine accessibility.

Emphasizing creative expression as varied and groundbreaking as the borough it serves, BRIC provides opportunities and platforms for Brooklyn artists and media makers to create and present new works. The organization champions the creativity of Brooklyn and work that expands the boundaries of artistic disciplines. BRIC’s highly accessible exhibitions, performances, television programs and educational programs serve more than one million Brooklyn residents each year.

The Celebrate Brooklyn! Performing Arts Festival is BRIC’s flagship performing arts program. Launched by BRIC in 1979 as a catalyst for a burgeoning Brooklyn performing arts scene, and to bring people back into Prospect Park after years of neglect, Celebrate Brooklyn! was an early anchor in the park’s revitalization and has become Brooklyn’s foremost summer cultural attraction. Over its history, the festival has presented over 2,000 artists, from emerging innovators to internationally established performers. Since 2011, BRIC has also produced a lively series of Celebrate Brooklyn! dance parties in Brooklyn Bridge Park.