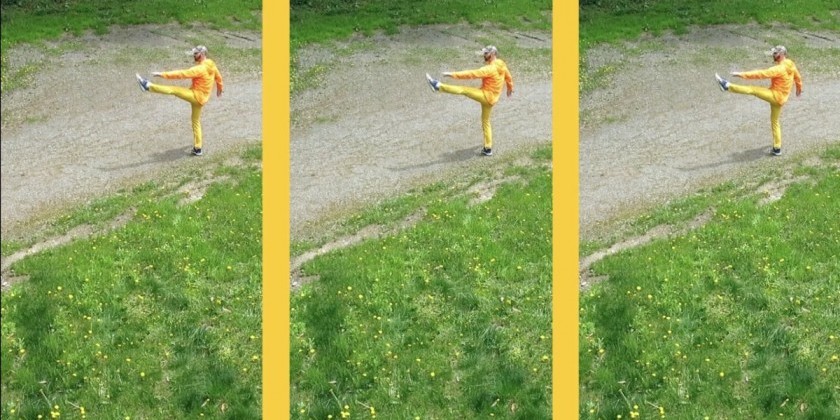 It's a flower. It's a weed. It's music. It's noise. There is attraction. There is disinterest. Fascination. Boredom. We live life straddling opposites, finding difference, labeling things as fact when the eye and ear belong to the beholder. Dandelion attempts to be all these things at once. It is a metaphor for being rooted, for perseverance; it is also a visual collection of poems and a meditation on time, repetition, patterns, burnout, and balance. To enter the world of the dandelion requires slowing down and focusing in, actions quite counter to the pace and scope of most daily life. To watch Dandelion, visit https://www.dancewithus.org/.

Upcoming Monthly Dances to Premiere on the Dance With Us Platform

A relationship adrift. Set on a floating dock and filmed last summer in Upstate NY, the film features a couple together yet apart. Created during the pandemic, Adrift positions the two dancers in close proximity, drifting. Unmoored, yet also contained, abandoned, yet also rooted. Charged is another dance film created during the pandemic, commissioned by the Texas-based Flatlands Dance Theatre. It premiered in a limited release last May. This August it will become available to all. The humorous six-minute film showcases an over-caffeinated character in her kitchen toggling between chaotic organization and organized chaos. If not on the verge of a nervous breakdown, a woman on the brink of disaster.

September 2021: Back to School: The Lecture

Released for the first time, The Lecture, an evening-length solo that premiered at The Ailey Citigroup Theater in 2010 mixes the serious with the comic, the existential with the everyday. Set to a score of pre-recorded lectures by university professors, The Lecture marries the intellectual and the physical to explore a variety of subjects including the history of language, the science of happiness, the nature of abstraction, mathematics, human evolution, and dreams. Watch the trailer at https://www.youtube.com/watch?v=xJQHbqZD-bo&feature=youtu.be.

Filmed on location in Ucross, Wyoming, Daniel's alter ego, Camo Man, is out in the wild, blending into the landscape in dress and site-specific choreography, sticking out by performing contemporary modern dance into the untouched 20,000 private acres of cattle ranch on the Ucross Foundation's property.

November 2021: Just in Time for the Thanksgiving Holidays: Castillo

Filmed in southern Spain, Castillo was shot on location at The Castillo de Blanca, a castle erected in the 12th century in the Spanish town of Blanca (Region of Murcia). Daniel's daily investigation and interrogation of the site was an arduous and risky process, climbing 730 feet daily underneath the intense summer heat, while the town took siesta, and onto the two towers and risky pinnacle, without being tethered. Watch the trailer at https://vimeo.com/533943555 (password: castillo)

December 2021: Just in Time for the December Holidays: The Performer

The Performer considers constructions of performance and homes in on the curvilinear separating fantasy from reality and drama from camp. The Performer presents a documentation of an over-the-top artist, a moody bon vivant with a penchant for excess and grand expression who lives large, including in the recesses of his head. The film is shot in the house Picasso gave to the surrealist artist Dora Maar, his famous muse and mistress, when he ended their relationship. Dora, significantly altered, lived and died in this maison in the Provençal village of Ménerbes, France. The film takes inspiration from her life, tackling the schism between the performance of self that one broadcasts to the public, and that which one endures privately. Watch the trailer at https://vimeo.com/344880352.

Also featured on the Dance With Us site are exclusive narrated video clips from all of the special guests from the site's launch, as well as an exclusive guided tour which provided the first inside peek of the site from Daniel himself. Other highlights of the platform launch event include the premieres of Parade, Willow, Dollhouse, and a newly edited version of last year's acclaimed The Fantasyland Project, all of which were produced during the pandemic; and the opening of the Dance With Us Photo Gallery. Mixing discussions, dancing, and conversations, the interactive premiere was highly accessible, entertaining, and educational.

"The heart of the platform is the ability to hear about dance from a range of artists, including many former dancers along with several esteemed guests, while watching the diverse range of choreography," said Daniel. "The platform houses scores of interviews and narrated dances which will live on the platform as discrete bite-sized films. These are unique opportunities to hear the perspectives of the performers, not only learning how they became dancers and what influences in their lives have supported their pathways, but what goes through their minds as they watch choreography, and watch themselves, or others, perform. I think this kind of immersion into the world of contemporary dance allows audiences to not only gain more insight, but to refine their own opinions and ideas, and to be empowered to express these."

This multi-faceted project explains ways to view and speak about dance. Utilizing performance and studio footage, the resource demystifies concert dance by teaching fundamental concepts of the art form. This digital resource will be distributed widely and freely, contributing to the Open Educational Resources movement (OER), a commitment to equity, inclusion, and accessibility. The resource will be available to anyone regardless of geographic location. Multiple partnerships will ensure the impact on students, professionals, and the general viewership. The Company will also provide the resource to channels, institutional libraries, public and private schools (K-12, Higher Education), and culturally based organizations.

"Contemporary dance has been seeping more and more into the mainstream culture for decades, enhanced with the advent of shows such as So You Think You Can Dance and Dancing With The Stars. With the proliferation of dance online, increased exponentially during the pandemic, more people are arguably seeing contemporary dance than ever. And an appetite for innovative choreography is a byproduct of this exposure," said choreographer and company director Daniel Gwirtzman. "The development of Dance With Us was in place years before the pandemic, with resources that have been created over the past two decades, an extension of programming we have offered as a company since our inception in 1998. We have long been committed to conversing about dance, empowering audiences to trust their opinions, and gain more knowledge of dance in pursuit of expanding one's dance literacy. The ubiquity of dance on film, finding more currency in popular culture, is not going to change. This platform gives everyone, regardless of their exposure to dance, tools to use to speak about dance, encouraging them to understand their viewpoint is as valid as that of an 'expert.' At this moment when there is so much dance to see, this platform seeks to serve as a how-to primer."

A teaching and performing organization celebrating its 23rd (we incorporated in 1999; our first Yard residency in 1998 and this is 23 years,) Anniversary, Daniel Gwirtzman Dance Company has demonstrated a commitment to education since its inception. The Company has stayed true to its mission of cultivating the creation of innovative art and presenting this to the public in interactive, accessible, and meaningful ways. The Company believes everyone can join the dance. Programs encourage audiences to be active participants, integrating communities into the dance-making and performing processes, and teaching how dance can play a meaningful part of one's physical and overall health. This project is aligned with the Company's core values, pedagogy, and programming, which have consistently gained acclaim. Narrated films will present favorite dances from the Company's repertory, illuminate dance histories, provide wellness best practices, and showcase the Company through behind-the-scenes footage and interviews. The project is also aligned with the production of dance films the Company has consistently created the past ten years.

Daniel Gwirtzman–producer, director, educator, filmmaker and dancer–celebrates twenty-six years as a New York choreographer and company director. His diverse repertory has earned praise for its humor, stylistic versatility, musicality, charisma and accessibility. "A flair for the entertaining," says critic Elizabeth Zimmer. "Mr. Gwirtzman does know that in dance less can be more. And that's a good thing for any choreographer to know" writes The New York Times. The New Yorker describes him as a choreographer of "high spirits and skill." For the New York City-based Daniel Gwirtzman Dance Company, he has created more than one hundred repertory works known for their playful virtuosity, blending robust physicality with universal themes. His choreography has been performed at venues throughout the country and abroad. He has been awarded commissions, residencies and fellowships from institutions including the Joyce Theater Foundation (NY), Ucross Foundation (WY), The Studios at Key West (FL), Aktuelle Architektur der Kultur (Spain), Dora Maar House (France), The Yard (MA), Jacob's Pillow Dance Festival (MA), CUNY Dance Initiative (NYC), Djerassi Resident Artists Program (CA), Sfakiotes (Greece), Gdański Festiwal Tanca (Poland), Raumars (Finland) and the Sacatar Foundation (Brazil). A master teacher, Gwirtzman has worked at numerous universities. He has been a full-time faculty member at SUNY Buffalo State, Kennesaw State University, and The University of the Arts and is currently an Assistant Professor of Dance at Ithaca College's renown Department of Theatre Arts (2019-present). Daniel holds degrees from The University of Michigan and The University of Wisconsin. He danced in the companies of Garth Fagan Dance and the Mark Morris Dance Group among others. He co-founded Artichoke Dance Company in 1995, which The New York Times called "a welcome addition to the New York dance scene." As a dancer he has been described as "a willowy John Travolta, sensual, playful, a rag doll, unusually supple, and one who moves like the wind."

With a large repertory noted for its entertaining flair, stylistic diversity, musicality, and humor, DGDC consistently delivers high-energy performances. Blending virtuosic precision with pedestrian ease, the dancers are renown for their charisma. The Company is "a troupe I'd follow anywhere" (The Village Voice), a "troupe of fabulous dancers" (Back Stage) that "can't help but smile" (The New Yorker). Operating with the philosophy that everyone can join the dance, DGDC has demonstrated a commitment to education since its inception in 1998. The Company's interactive programming, known for its infectious energy and accessibility, captivates the greatest common denominator among diverse populations and provides a range of innovative, accessible programming. The Company is known equally for its innovative choreography and for its family-friendly events and community-building projects. DGDC thrives on collaborations with cultural organizations and institutions. All of the programs are tailored through an active collaboration with local presenters. They are interested in a touring model where community exchange bookends projects in extended ways and technology plays a key role and seek to bridge the divide separating dance from the mainstream culture, underscoring the primacy, purpose, and possibility of dance in contemporary life. The Company believes that dance's power to shift people's perceptions and identities, one person at a time, can create transformative ripples into society at large.