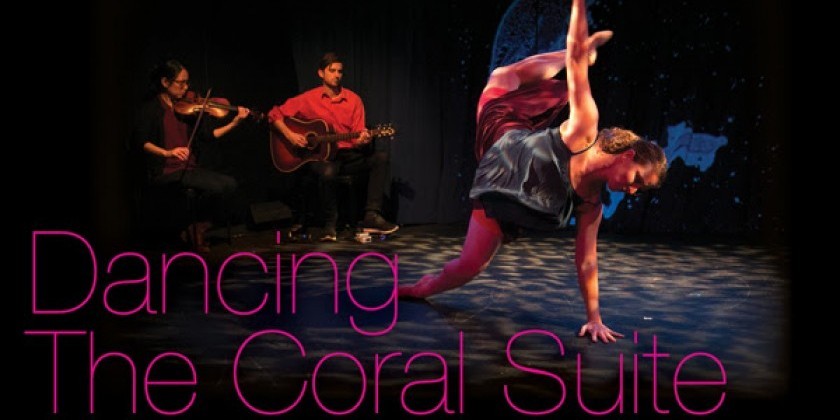 “Carr’s immensely likable and skillful dancers move with a space gobbling buoyancy and openness that looks as if they might take flight,” - The New York Times

“An engrossing, powerful performance that pushed the boundaries of traditional Irish music and dance in a transformative direction unlike anything yet seen,” – The Irish Echo (on the artists’ 2018 collaboration)

The Bessie-award nominated Darrah Carr Dance returns to Irish Arts Center with the premiere of Dancing the Coral Suite, a groundbreaking second collaboration with traditional music duo Dana Lyn & Kyle Sanna. Performances run from Sat, Nov 23 at 8pm; Sun, Nov 24 at 2pm; and Sun, Nov 24 at 7pm. Tickets are $30 General; $24 for IAC members; and $15 for children 14 and under for the matinee. To purchase, call 866-811-4111 or visit www.irishartscenter.org

The exuberant new work features fiddler Dana Lyn, guitarist Kyle Sanna, and a cast of champion Irish step dancers and marks the second collaboration for the artists following last year’s sold-out run. This season, they perform a choreographic exploration of the musical duo’s latest concept album, “The Coral Suite.” Bringing to life the fragile ecosystem of a coral reef, the evocative sequence of Irish tunes becomes an audiovisual poem that blends the rich vocabulary of Irish melody with animated projections featuring Lyn’s artwork. The haunting musical environment pays tribute to the reef’s miraculous biodiversity while calling attention to the urgent need for its protection. Known for taking a “through the looking glass approach” to their artistic process, Lyn and Sanna connect the dots between their experience as composers and improvisers in New York City’s rich musical community and their deep admiration for traditional Irish music. Described as “alive with expressive subtlety and symbolism that communicates the wonder of the subject at hand” (The Irish Echo), “The Coral Suite” features inventive arrangements and nuanced interpretations of traditional Irish music.

Mirroring Lyn and Sanna’s blend of tradition and innovation, Artistic Director Darrah Carr vividly reimagines Irish dance and music in her trademark style of ModERIN: a unique fusion of traditional Irish step and contemporary modern dance. Through the inclusion of floor work, arm and torso movements, and intricate partnering, her choreography expands the boundaries of Irish dance vocabulary and simultaneously questions disciplinary boundaries, too. Throughout Dancing the Coral Suite, the dancers become musicians through a multi-faceted exploration of the nature of percussive dance which leads them to make rhythms barefoot; or with taps placed on the bottom of Irish dancing soft shoes and on the tops of jazz slippers.

Additional highlights of the season include: an Opening Night Reception following Saturday night’s performance; specially priced tickets for children age 14 and under for the Sunday matinee; a pre-show conversation with Darrah Carr Dance starting at 1:30pm on Sunday followed by a post-show dance lesson for kids; and a talkback with Artistic Director Darrah Carr and musical artists Dana Lyn & Kyle Sanna following Sunday night’s performance.

“ModERIN is a combination of the best of both traditions, essentially creating a new language of movement from two distinct vocabularies of dance . . .To watch these performances is to see Irish dance in a whole new way . . . a glorious mélange of sound and movement that's breathtaking,”

Recent performance highlights include: “Good Morning America,” a return appearance on NBC's “The Today Show,” a performance with The New York Pops at Carnegie Hall, a benefit performance at Jazz at Lincoln Center, "Victory Dance" at The New Victory Theater, “The Yeats Project” at the Irish Repertory Theatre, The Duke Theater on 42nd Street, Celebrate Brooklyn, Inside/Out at Jacob’s Pillow Dance Festival, MASS MoCA, The Yard at Martha’s Vineyard, and The Bank of Ireland Arts Center in Dublin. Darrah Carr Dance is represented exclusively by Siegel Artist Management.

Darrah Carr holds an PhD in Dance from Texas Woman’s University. She received her MFA from New York University's Tisch School of the Arts and graduated Phi Beta Kappa from Wesleyan University. Named one of the “Top 40 Under 40” by The Irish Echo, one of the “Top 100 Irish Americans of the Year” by Irish America Magazine, and one of the “Most Influential Women of 2010" by The Irish Voice, Carr has been active for twenty years in both the Irish and modern dance communities as a choreographer, dancer, educator, and writer. In addition to her work as the Artistic Director of Darrah Carr Dance, Carr and her Irish step dance partner, Niall O'Leary, have performed their duet act in a variety of locations ranging from Disney World to the Osaka Festival Hall in Japan. They are featured dancers in Absolutely Irish! a PBS documentary directed by Academy Award winner Paul Wagner with a cast of the finest traditional Irish musicians led by Dr. Mick Moloney. Carr teaches in the Conservatory of Dance at Purchase College and is associated with Hofstra University's Dance program, as well as Mason Gross Arts Online at Rutgers University. She has been a Guest Artist at Manhattanville College, Adelphi University, and Queensbourough Community College. Carr is a respected dance scholar and has presented research papers at the Congress on Research in Dance, the World Dance Alliance, Dance Research Forum Ireland, the Popular Culture Association, and New York University's Percussive Dance Symposium. Carr is a frequent contributor to Dance Magazine, Dance Studio Life, Dancer, and The Dance Insider. She has also contributed a chapter to Close to the Floor: Irish Dance from the Boreen to Broadway published by Macater Press.

“Carr is a smiling, exuberant performer with an open upper body and fast-flying feet straight out of Irish step dancing,” - The New York Times

Hailed as “ground-breaking” by noted folklorist and NEA Award-recipient Mick Moloney and “bursting with creativity” by renowned fiddler Kevin Burke, Dana Lyn & Kyle Sanna have collaborated with some of the greatest living interpreters of Irish music, including Martin Hayes and Dennis Cahill, Cillian Valley, Kevin Burke, and Mick McAuley. Lyn and Sanna have brought their inventive arrangements and nuanced interpretations of traditional music to the Old Songs Festival, the Catskills Irish Arts Festival, the Fairbanks Summer Arts Festival, Wellesley College, West Virginia’s Augusta Heritage Center, and Traditional Arts in Upstate New York. Since 2015, they have been residents at the Avaloch Farm Music Institute in Boscawen, NH. Their album The Great Arc is inspired by and concerned with extinct and endangered animal species. In April 2018, Lyn and Sanna released their third album The Coral Suite, an evocative suite of music that mirrors the life cycles and natural processes that occur within the ecosystem of a coral reef.

“Lyn and Sanna challenge our expectations and assumptions about Irish music (and) invite us to consider our perceptions of the natural world and how attuned we are to its rhythms and phrases,”
– The Boston Irish Reporter on their album “The Great Arc”

Dana Lyn has performed at New York’s Lincoln Center, Beacon Theater, the Brooklyn Academy of Music, Carnegie and Town Halls, as well as folk festivals and dive bars the world over. A violinist and keyboard player, she is at home in multiple musical worlds, ranging from classical to traditional Irish, contemporary and improvisatory music. She has worked and performed with a wide variety of artists such as Tony Award-winning musicians Stew and Heidi Rodewald, Irish poet Louis de Paor, Ethan Hawke, Vincent D’Onofrio, Taylor Mac, avant cellist Hank Roberts, D’Angelo and the Vanguard, the Elysian Fields, La Mar Enfortuna, Susan McKeown, Johnny Cunningham, and the Walkmen, among others. As a composer, Lyn has received commissions from the Brooklyn Rider, the Apple Hill String Quartet, the National Arts Council of Ireland, fiddler Martin Hayes, violist Nicholas Cords and the New Orchestra of Washington. Dana was an artist in residence at the Baryshnikov Arts Center in the Spring of 2017.

Kyle Sanna has been active as a composer, producer, guitarist, and improviser in New York City since 2000. His music has been performed across the globe and he has collaborated with and performed alongside Yo-Yo Ma, Edgar Meyer, Chris Thile, Kevin Burke, Martin Hayes, Seamus Egan, and more. As a composer, Kyle has received commissions from Beta Collide, Brooklyn Rider, the Knights, and flutist Alex Sopp. Kyle Sanna has arranged music for Bela Fleck, Jan Vogler, Anne Sofie Von Otter, Martin Hayes and Yo-Yo Ma. His arrangements have appeared on The Colbert Report, NPR’s Performance Today, and on the Sony Classical, Sony Masterworks, and Naïve labels. In addition to his composing and arranging, Kyle Sanna is an active improviser on guitar, synths, and samplers, performing solo and collaborating with instrumentalists, instrument designers, dancers, and theater companies. He lives in Brooklyn and is a member of Kinan Azmeh’s City Band, Peter Apfelbaum’s Sparkler, Marika Hughes & Bottom Heavy, The Seamus Egan Project, Ground Patrol, We the Gleaners, and a duo with violinist Dana Lyn.

Darrah Carr Dance's season is made possible in part by public funds from Creative Engagement, supported by the New York City Department of Cultural Affairs in partnership with the City Council and the New York State Council on the Arts with the support of Governor Andrew Cuomo and administered by the Lower Manhattan Cultural Council (LMCC.net). The Ireland Funds also support Darrah Carr Dance's programs.