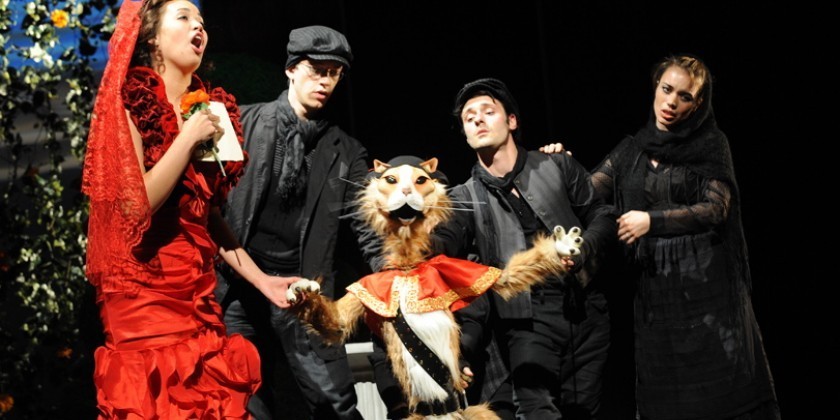 Gotham Chamber Opera announces the revival of the 2010 production El gato con botas (Puss in Boots) from December 6-14, 2014 at El Teatro at El Museo del Barrio, 1230 Fifth Avenue at 104th Street, NYC.  Tickets are $30-$175 (discounts available for children) and are available online at www.ticketcentral.com, by phone at (212) 279-4200, or by visiting the Ticket Central box office at 416 W. 42nd Street (between 9th and 10th Avenues) in the lobby of Playwrights Horizons.  For more information, visit www.gothamchamberopera.org.

A co-production with El Museo del Barrio and Works & Process at the Guggenheim.

This fall, the cat in the spats is back, when Gotham Chamber Opera revives El gato con botas (Puss in Boots), Xavier Montsalvatge's take on the classic story of a mangy feline with magical talents. Can Puss win the princess's hand for his master? Can he outwit the evil ogre? Don't miss the amazing Bunraku puppetry that turns a fairy tale into an evening of "tuneful," "magical," "exquisite," and eye-opening opera. Gotham’s production will be directed by Moisés Kaufman (The Laramie Project, 33 Variations) and features puppetry from London’s Blind Summit Theater. Featuring Ginger Costa-Jackson/Karin Mushegain, Andrea Carroll, Craig Verm, Kevin Burdette, and Stefanos Koroneos.

The Teatro’s interior contains scenes from children’s literature, including a mural of “Puss in Boots” designed in 1921 by the gifted illustrator and painter, Willy Pogany (1882-1955).

ABOUT THE 2010 PRODUCTION OF EL GATO CON BOTAS:

“The puppets worked brilliantly. The cat strutted, slunk and cavorted, evolving from a mere house cat to a regal puss in boots.”
- Vivien Schweitzer, The New York Times

“It’s the puppetry, created by London's Blind Summit Theatre, which takes the breath away...”
- Ron Cohen, Back Stage

“My only disappointment was that the show had to end.”
- Patrick Dillon, Scherzo

“An enthralling show for adults and kids of all ages.”
- Bill Madison, The Flip Side

Alexandre bis & Comedy on the Bridge

Presented in collaboration with the Gerald W. Lynch Theater at John Jay College.

A bridge to nowhere. A singing painting. An intermittent beard. Take a dip into the 20th-century absurd as Gotham Chamber Opera begins its 13th season with a double-bill of short comic operas by Czech composer Bohuslav Martina. Alexandre bis (Alexander twice) is a surrealist comedy about a man who decides to test his wife’s fidelity by shaving off his beard and posing as his own cousin from Texas. She recognizes him but falls in love anyway. Martina’s answer to Mozart’s Così fan tutte observes the conventions of comic opera while tweaking them, thus proving that a composer, if not a husband, can have it both ways. Comedy on the Bridge tells the story of two rival principalities separated by a river. A woman returning from one side gets caught in the middle by a bureaucratic snafu; soon she’s joined in this absurdist limbo by a letch, a fiancé, a vengeful wife, and a schoolmaster with a riddle. Everyone has a secret, but no one has a clue – except the composer, who gets them all happily sorted by the end. Featuring Jenna Siladie, Abigail Fischer, Cassandra Zoé Velasco, Jason Slayden, Jarrett Ott, Joseph Beutel. Gotham Chamber Opera previously presented a MartinA¯ double-bill of Les larmes du couteau and Hlas lesa in 2003, a hit with the press and the public, resulting in lines around the block for returned tickets.

"Both works were done with a startling combination of sensitivity and panache."

The Tempest Songbook, comprised of incidental music for The Tempest composed in 1695 and attributed to Henry Purcell, and Kaija Saariaho’s 2004 Tempest Songbook for soprano, baritone and period instrument ensemble, in its U.S. and World Stage Premieres. A co-production with The Martha Graham Dance Company, The Tempest Songbook will be performed in the Grace Rainey Rogers Auditorium at The Metropolitan Museum of Art, with three performances from March 26 – 28, 2015 at 7pm.  Tickets range from $30 to $175 and are available at metmuseum.org/tickets.

The Tempest Songbook will explore the themes of William Shakespeare’s The Tempest through dance, movement and song. The singers and dancers will express the words and actions of various characters, resulting in a lyrical vision of Shakespeare’s play.  The production is also notable for the video creation of celebrated multimedia artist Jean-Baptiste Barrière.

The Tempest Songbook will be conducted by Neal Goren and directed and choreographed by Luca Veggetti, with scenic design by Luca Veggetti and Clifton Taylor, lighting design by Clifton Taylor (who created last season’s production of Hosokawa’s The Raven), and video creation by Jean-Baptiste Barrière; and will feature Jennifer Zetlan, soprano, Thomas Richards, bass-baritone, and dancers from the Graham Company.

Gotham Chamber Opera is the nation’s leading opera company dedicated to vibrant, fully staged productions of works intended for intimate venues. Its high quality presentations of small-scale rarities from the Baroque era to the present have earned Gotham an international reputation and unanimous critical praise.

Gotham has partnered with notable New York and national institutions, including Lincoln Center Festival and Spoleto USA (La bella dormente nel bosco) in 2005; the Morgan Library and Museum for Scenes of Gypsy Life (an evening of song cycles by JanáAAek and DvoAAák) in 2008; the American Museum of Natural History and the American Repertory Theater for Hadyn’s Il mondo della luna (2010); Brooklyn Botanic Garden and the Broad Stage, Los Angeles for Daniel Catán’s La hija de Rappaccini (Rappaccini’s Daughter, 2013); Trinity Church Wall Street for Marc-Antoine Charpentier’s La descente d’Orpheé aux enfers (2013); The Metropolitan Museum of Art for Monteverdi’s Il combattimento di Tancredi e Clorinda and Beecher’s I Have No Stories To Tell You (2014); and the New York Philharmonic for Hosokawa’s The Raven (2014).

In recent years, Gotham Chamber Opera has been recognized as a pioneer in creating opera productions in alternative venues, beginning in 2010 with its production of Haydn’s Il mondo della luna at the Hayden Planetarium, followed in 2013 with the U.S. professional stage premiere of Francesco Cavalli’s Eliogabalo at New York’s notorious late night club The Box, Catán’s La hija de Rappaccini on the Cherry Esplanade of Brooklyn Botanic Garden and at the Greystone Manor in Beverly Hills, and the double-bill of Monteverdi’s Il combattimento di Tancredi e Clorinda in the Metropolitan Museum of Art’s Bloomberg Arms and Armor Gallery and Beecher’s I Have No Stories to Tell You in the Medieval Court.