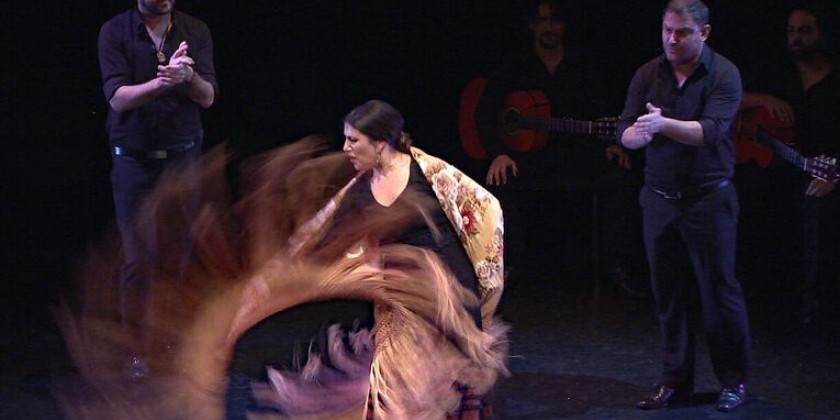 In VOCES DE ANDALUCIA, Flamenco Vivo presents a suite of contemporary flamenco dance and music inspired by the cultural richness of Andalucia, the region of Spain known as "the cradle of flamenco." Voces - "voices" - explores this land of inspiration through the genius of two Andalucian-born artists, Pablo Picasso and the playwright-poet Federico Garcia Lorca. The suite features three new works: the world premiere PiCa, Susana di Palma's dance/fiction about Picasso; Federico, a celebration of Lorca's life, art and his profound connection to flamenco and its peoples; and Música Andaluza an adaption of Lorca verses, in a world premiere instrumental/vocal composition by Gaspar Rodriguez.  The program also includes Angeles II, choreographed and performed by British National Dance Award nominee Ángel Muñoz, praised by The New York Times for his "spontaneity, invention and surprise."

Performances take place May 3-8, 2016, (evenings, Tuesday-Saturday, 7:30pm; matinees, Saturday and Sunday, 2:00pm) at BAM Fisher, 321 Ashland Place, Brooklyn, New York.  Tickets are priced from $25, and can be purchased at flamenco-vivo.org, or through BAM.org.
For the opening on May 3, guests can join the company for its First Night Fiesta, including premium seating and a post-performance tapas reception with the artists. Fiesta tickets, $125 and $250; for more information, call 212.736.4499 or visit www.flamenco-vivo.org.

Flamenco Vivo will also offer a post-performance artist talk immediately following the Thursday (May 5) show; free and open to all same-day ticket-holders. Pre-show Chats before the evening performances on Wednesday (May 4), Friday (May 6) and Saturday (May 7) offer insights by flamenco experts, Fisher Building Lower Lobby at 6:30pm; free for same-day ticket holders, with pre-registration required to fvcsinfo@flamenco-vivo.org.

Major funding for Flamenco Vivo's 2016 NYC season at BAM Fisher has been generously provided by the Howard Gilman Foundation, with additional support from the Harkness Foundation for Dance; the Charles Schwartz Foundation for Music; the New York State Council on the Arts, a State Agency; and public funds from the New York City Department of Cultural Affairs in partnership with the City Council.
VOCES DE ANDALUCIA is presented by Flamenco Vivo Carlota Santana. BAM house and ticketing policies may not apply. All programs and casting subject to change.

KEY ARTIST BACKGROUND
CARLOTA SANTANA is an internationally renowned Spanish dance artist and educator, and the founder (1983) of Flamenco Vivo Carlota Santana. She has been called "The Keeper of Flamenco" by Dance Magazine in recognition of her commitment to creating new works and developing young artists and in 2013, the King and Spanish Government awarded Ms. Santana with La Cruz de la Orden al Merito Civil medalfor "all the years of passion, excellence and dedication to the Flamenco art." Ms. Santana has produced many major performance programs, presented nationally and internationally, toured extensively, developed and implemented Flamenco Vivo's curriculum-based arts education programs and created numerous community partnerships and residency programs.  She has been a member of the Dance Panel for the New York State Council on the Arts, and has served on the panel for the National Endowment for the Arts. Ms. Santana is on the faculty of Duke University, and has taught at New York University and Long Island University.

ANTONIO HIDALGO (Associate Artistic Director, Dancer, and Choreographer) was born in the town of Lucena (Córdoba) Spain, and has worked with many leading Spanish dance companies throughout his professional career. These include the companies of Jose Antonio, Paco Romero, Jose Greco and Antonio Gades, where he danced the principal role of Escamillo. He has collaborated with companies such as that of Maria Benitez, Masamy Okada and Yolanda Gonzalez, as well as various flamenco-fusion groups such as Kon-raza and Arickytwon. Hidalgo has appeared on Spanish television and theatre, working with such directors as Miguel Naros, Salvador Tavara and Antonio Molero. In partnership with Inmaculada Ortega, he directs the Company Aroma Flamenca. He has received commissions from the New York State Council on the Arts for his acclaimed pieces "Mano a Mano" and "Bailaor/Bailaora" and "Imagenes Flamencas," which toured nationally and premiered in New York at The Joyce Theater in 2001, 2002 and 2006 respectively.  Named Flamenco Vivo's Associate Artistic Director in 2013, Antonio has also served as rehearsal director and performer with the Fundación Antonio Gades, whose mission is to preserve the legacy of this famed Spanish choreographer.

SUSANA DI PALMA - (Choreographer) has studied Spanish dance and flamenco since childhood, training in Spain with maestros Ciro, Manolo Marin, Manolete, Carmen Mora and Merche Esmeralda, and performing throughout Spain in tablaos and with companies such as La Singla.  In 1985, she founded Zorongo Flamenco Dance Theater in Minneapolis with the mission to create innovative theater works that expand on traditional flamenco to reflect on controversial contemporary issues. Di Palma's full length theater-flamenco ballets include:  Flor, Garden of Names, Gernika, Sadja , First, I Dream,  La Virtud Negra, Encuentros, Tales of the Black Legend, Convivir, Los Caprichos among others. Her works have been presented at The Cowles Center, New York's Joyce Theater, Miami's Florida Dance Festival, St. Paul's O'Shaughnessy Theater's "Women of Substance Series," and the Walker Art Center. Di Palma has received grants and fellowships from the Minnesota State Arts Board; National Endowment for the Arts; The McKnight Foundation; Jerome Foundation, Metropolitan Regional Arts Council and The Bush Foundation. She currently divides her time between Madrid and Minneapolis.

GASPAR RODRIGUEZ (Composer, Guitarist, Musical Director) was born in Estepona, Málaga.  He has won several prestigious awards, including the "Sabicas," and was a finalist of La Unión in flamenco guitar.  An accomplished composer, Gaspar has traveled throughout Spain, Europe and in New York City with Cañadú with whom he has produced several CD's, and has worked for El Nuevo Ballet Español under the direction of Angel Rojas.  In addition to touring worldwide with many esteemed flamenco artists, including Juan Andrés Maya, Rocío Molina, Juanito Maravillas, Andres Lozano, Maite Maya and Paco del Pozo, he regularly performs in Madrid tablaos Casa Patas and Las Carboneras.  Gaspar first worked with Flamenco Vivo in 1997 and currently servies as Musical Director for the company's New York seasons and National Tours.

ÁNGEL MUÑOZ (Choreographer, Dancer), born in Córdoba, began his studies with Inmaculada Luque and as a student of the Conservatory of Dance, then won the prize "La Mejorana" in 1994 in the National Contest of Flamenco Art in Córdoba. He began his performing career with Javier Latorre's Company Ziryab Dance, and went on to roles as first dancer with the companies of José Antonio and María Pages in Spain, and with María Benitez in the USA. He is the first dancer and guest artist with Paco Peña, and his work with Peña's ensemble earned him a nomination for Britain's 2015 National Dance Awards. Ángel has created choreographies for his own company and in collaboration with the guitarist Victor Monge, "Serranito" and Juan Manuel "Cañizares," with whom he has released a record. He was in the movie Callas Forever directed by Zeffirelli, performs often in London, America and throughout Europe. Ángel first worked with the Flamenco Vivo in 1996, and has been a featured guest artist and choreographer since 2012.