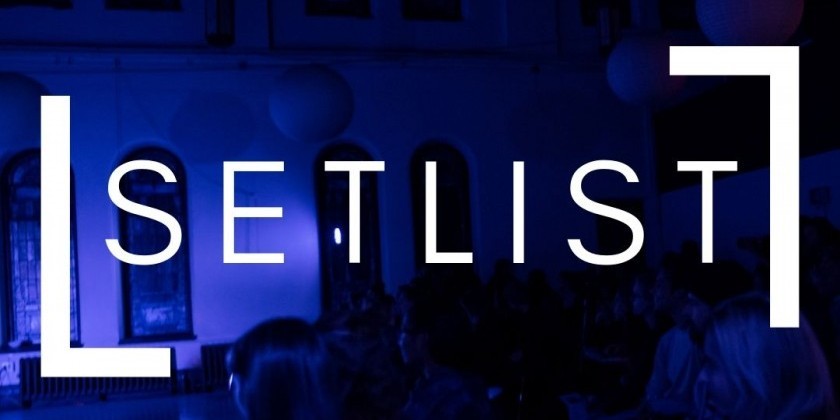 Join Gallim for SETLIST, a curated evening of dance, music, and film. SETLIST, Gallim’s interdisciplinary performance opportunity, is a residency program that provides space for featured artists to develop work as well as a performance platform to show it. SETLIST includes a showing of Artists in Residence work plus a film set and a live music set. Enjoy a drink and soak up the acoustics of our landmark Brooklyn studio.

Keep it legal. You must be 21 years or older to drink.

All ticket payments are non-refundable.

ANGELO VASTA | FILM SET | Short Film of Gallim's WHALE
Angelo is an Italian filmmaker and videographer based in Brooklyn, NY. He mostly works with dance companies and performing artists. His work includes music videos, short films, behind-the-scenes and promotional videos for both individual dancers and dance companies. Recent and ongoing projects include videos for The New York Times, Ballet Hispanico, Gallim Dance, MADBOOTS and FJK Dance amongst many others.

JORDAN T. CHIOLIS | MUSIC SET
Jordan (Composer and Sound Designer) is a percussionist, composer, and electronic music artist living and working in Brooklyn, NY. His interaction with the dance community continues to grow and most recently includes collaborating with Kyle Abraham, Doug Varone, David Dorfman, Paul Taylor Dance Company, and Andrea Miller & Gallim Dance. His most notable projects are alongside Gallim producing music for eight by eight, an interactive sound, movement, and video installation that premiered at Lincoln Center in 2014. In 2015, his evening length work with Gallim, WHALE, received stellar reviews from the New York Times and is currently touring domestically and internationally. His work with Gallim culminated in a sight-specific residency & world premier at the MET in 2016. Jordan has been an on-staff musician, composer and educator at the dance schools of Hofstra University, New School and New York University. He is extremely grateful to be actively performing around the U.S. as a percussionist, recording with various musical projects ranging in style while scoring dance film as well as larger features.

BEN STAMPER | FILM SET | GROUNDED
Ben Stamper is a filmmaker and artist based in the northeastern United States. His work spans narrative, documentary and contemplative genres. Some common themes that can be found in Ben's work are human consciousness, patterns of nature and embodied language. With a background in studio arts, Ben is fond of working with other artists, choreographers and musicians. Past works have featured Meredith Monk, the Paul Taylor American Modern Dance Company, Sonya Tayeh, New Chamber Ballet, Bill T. Jones, Kenyon Adams, Keyon Harrold, Ernest Felton Baker and Matthew Rushing of Alvin Ailey American Dance Theater. Ben is also a frequent collaborator with Gallim Dance, and is currently developing a short narrative film with Andrea Miller.

ADAM BARRUCH & CHELSEA BONOSKY | DANCE SET | TRAUMNOVELLE
Adam began his career as a young actor, performing professionally on Broadway and in film and television, working with prominent figures such as Tony Bennett, Jerry Herman and Susan Stroman. He later received dance training at LaGuardia High School for Music & Art and Performing Arts and The Juilliard School. He was a dancer with Sylvain Émard Danse in Montreal, and has also worked with The Margie Gillis Dance Foundation, performing and researching Conflict Transformation as part of The Legacy Project. Based in Brooklyn, Adam currently creates and performs work under the epithet of his own company, Anatomiae Occultii. He has also created works for companies such as The Limón Company, Ailey II, Keigwin + Company, Ririe-Woodbury Dance Company, River North Dance Chicago, BalletX, Whim W'Him Seattle Contemporary Dance, Graham II, GroundWorks Dance Theater, Minnesota Dance Theatre, The Gibney Dance Company and 10 Hairy Legs, as well as for dance icons Margie Gillis and Miki Orihara. Adam Barruch was selected for the inaugural Alvin Ailey Dance Foundation New Directions Choreography Lab made possible by generous support from the Ford Foundation, and was also the recipient of a Lotos Foundation Prize in the Arts and Sciences. Adam Barruch has been the choreographer-in-residence at the Lobero Theatre in Santa Barbara, California as part of the annual DANCEworks Residency. Adam Barruch was an artist-in-residence at the 92Y Harkness Dance Center. He is currently working on a new physical theater production of Stephen Sondheim’s Sweeney Todd: The Demon Barber of Fleet Street.

Chelsea Bonosky grew up in Rochester, NY, studying under the mentorship of Timothy Draper, at The Draper Center for Dance Education. Upon graduating, she attended New York University's Tisch School of the Arts. She was an apprentice with Stephen Petronio and has worked with Sidra Bell and Curt Haworth. For over three and a half years, Chelsea performed on contract with London based company Punchdrunk, in their immersive production of Sleep No More. Chelsea has been creating, rehearsal assisting, performing, and working administratively with Adam Barruch since their initial meeting at Springboard Danse Montreal in 2009. In 2016, they formed Anatomiae Occultii, where she acts as Associate Director. In 2017, Chelsea performed in and produced her first solo show, LUNA, which was presented at The Agnes Varies Performing Arts Center in Manhattan. It was an evening of four solos she performed created in collaboration with Adam Barruch, Pavel Zustiak, Gabrielle Lamb, and Mary Carter. Chelsea is honored to be working with Margie Gillis, and The Margie Gillis Dance Foundation, performing and researching Conflict Transformation as part of The Legacy Project. She also works for Sarah Elgart/ Arrogant Elbow, in site- specific performances and films. Ghost Story (features fashion by ISSEY MIYAKE USA, and produced by The Stephen Gassman Studios), and was screened at many film festivals including, The Cannes Film Festival and Berlin Fashion Festival. Chelsea is also a guest artist with Josh Beamish, MOVE: The Company.