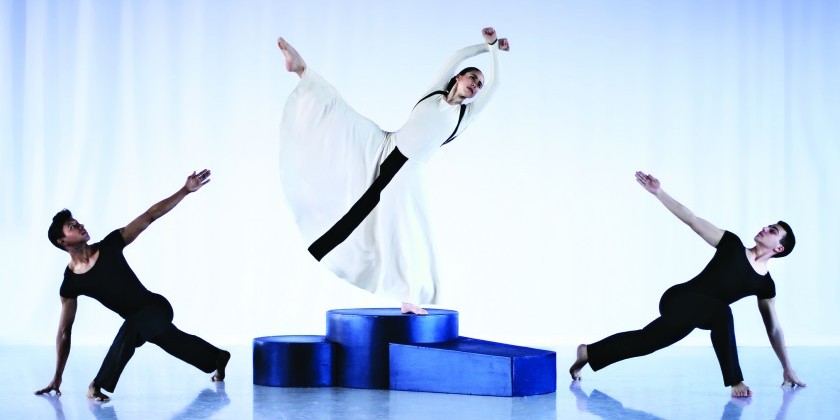 This June, the Martha Graham Dance Company’s acclaimed second company will be back on stage for its 39th New York season with an exciting program of new works and Graham classics. The season is dedicated to Yuriko, longtime Graham dancer, teacher, and Graham 2 founder, who passed away on March 8 at the age of 102.

“The issues of our relationship with nature and with one another have become even more energized and urgent during the challenges of the pandemic. These worldwide personal and political concerns motivate all of us to express fresh and bold ideas through art,” said Graham 2 Director Virginie Mécène. “This season speaks to our present time by both celebrating nature and representing our responsibility to living together on this planet.”

The program, which includes a musical interlude with live music by Erán Fink and Stavh Danker, will feature three Graham works: Ritual to the Sun from Acts of Light, Dark Meadow Suite, a recent arrangement featuring highlights of the work, and Steps in the Street and Prelude to Action from Graham’s powerful work Chronicle, which will be performed for the first time with a cast of men and women.

At the Saturday matinee and evening performance, the company will pay a special tribute to Yuriko. A video of the original Moon, a duet from Graham’s Canticle for Innocent Comedians, featuring Yuriko, will be presented. Graham 2 was originally created by Yuriko at the request of Martha Graham in 1983 under the name of the Martha Graham Ensemble.

The season also features a film of Ensō, a site-specific work by Virginie Mécène, recently created for the Westfest Dance Festival, and a new work, Kenopsia, by Japanese choreographer and former Graham 2 dancer Yoshito Sakuraba. Kenopsiais influenced by Sakuraba’s fascination with the illusion of time and place, in particular a ghost town in California called Bodie. The palettes of artist Gregory Crewdson’s photographic compositions and his play with lighting to create scenes and interactions that capture the narrative depth of a work are also influences. Sakuraba says that he shapes a dance to fit a narrative layered with multifaceted, theatrical interactions.

Virginie Mécène, Director of Graham 2 since 2007 and Director of Programs at the Martha Graham School, is a former principal dancer with the Martha Graham Dance Company who has toured the world and performed many roles of the repertoire from 1994 to 2006. Her direction has focused on training the next generations of dancers for the Martha Graham Dance Company and other companies around the world as well as the next generations of Graham teachers through her pedagogic instructions. She has served as the director of the Martha Graham School from 2007 to 2015, maintaining and developing the school curriculum while sustaining the integrity of the Martha Graham technique and nurturing the process that continues its development. She created the Intensive Graham Teacher Workshop for teachers of all backgrounds. She has re-staged, reconstructed, and directed numerous works of Martha Graham at universities and dance companies, as well as taught the Graham Technique at multiple national and international conferences. In 2017, she reimagined and choreographed Graham’s lost solo Ekstasis for the Martha Graham Dance Company. Ekstasis was featured at the Palais Garnier, in Paris, performed by Étoile and Director of the Paris Opera Ballet, Aurélie Dupont. Mécène’s choreographic work has been presented in other venues such as New York City Center and the Joyce Theater in New York City, the Adrienne Arhst Center and the Broward Center, in Florida, and Kaatstbaan International Dance Center in Tivoli, NY. Mécène was also principal dancer with Buglisi Dance Theater since its inception in 1994; the Pearl Lang Dance Theater; and Battery Dance Company. A native of France, she graduated from the University of Bourgogne with a licence professionnelle in artistic and cultural management. She has also served as a lecturer at Barnard College, and as the president of EFSD (Emergency Fund for Student Dancers) regrouping member schools: the Ailey School, Limón Dance Institute, Dance Theatre of Harlem, Peridance Capezio Center, and the Martha Graham School, from 2012 to 2016. Mécène also serves as an adjudicator for dance competitions nationally and internationally.

Yoshito Sakuraba is the founding artistic director of Abarukas and an award-winning choreographer. Originally from Japan, Sakuraba began his career in New York City and has presented his work in Germany, Poland, Italy, Spain, Israel, Mexico, and across the US, including at the Joyce Theater, BAM Fisher, Jazz at Lincoln Center, Jacob’s Pillow, Kaatsbaan, and McCallum Theater as part of the Palm Desert Choreography Festival. He has received the Best Choreography Award at FINI Dance Festival in Italy, the Audience Award at Masdanza International Contemporary Dance Festival in Spain, and he is a winner of NW Dance Project’s Pretty Creatives and Whim W’Him’s Shindig. In addition to his company repertory, he has been commissioned by numerous companies including Bayerisches Staatsballett (Munich), DAF (Rome), Lamondance (Vancouver), Louisville Ballet, Ballet Arkansas, Ballet Des Moines II, Litvak Dance, Levy Dance, Pony Box Dance Theater, Modas Dance, Kit Modus, Nimbus Dance, and Peridance Contemporary Dance Company. Sakuraba seeks to inspire young artists in their artistic expression and has been invited to create works and teach at institutions such as Joffrey Ballet School, Alvin Ailey/Fordham University, University of North Carolina School of the Arts, Peabody at Johns Hopkins University, Marymount Manhattan College, Barnard College, DLNY, MOVE l NYC and Steps on Broadway Conservatory. Most recently he was commissioned by the Rozsa Center for the Performing Arts in Michigan.

Stahv Danker was born in Los Angeles and raised in Israel by a very artistic family. He specializes in drums and piano. Danker was accepted to the Israeli Defense Force Musical Collective, where he experienced many different performance settings. Upon the ending of his IDF service, he started his musical education at the New School extension for jazz and contemporary music in Tel Aviv. He received a scholarship to the jazz department of the New School in New York, where he earned his BFA in jazz and contemporary music. Soon after, he was selected to perform a two-week residency at the Bern Jazz Festival in Switzerland. He started accompanying professional dance classes as a percussionist and pianist in the leading dance schools in New York such as the Martha Graham School, the Juilliard School, Peridance Capezio Center, Steps on Broadway, and Gibney Dance. In February 2022, Danker released an album of 60 tracks of original percussion and piano music designed for the Martha Graham Technique or any other dance technique.

Born and raised in Israel, Erán Fink was musically educated in the country’s top schools and earned his degree from Berklee College of Music in Boston. He has been an active drummer in the New York City music scene since moving to the city after his graduation in 2011. As a dance accompanist, Fink has been an in-demand musician in New York’s biggest dance schools such as the Martha Graham School, the Alvin Ailey School, and Joffrey Ballet School. Fink is currently in the process of producing his debut album of original music.

Graham 2 is Martha Graham’s second company. Its mission is to bring the Graham tradition to a younger audience, smaller venues, and cultural communities, and to be a springboard for young dancers to enter the professional dance world. The most advanced dancers are selected from among the hundreds of students from around the world who study at the Martha Graham School. While in Graham 2, dancers are supported by a scholarship, receive stipends for performances, and may be given the opportunity to perform with the Martha Graham Dance Company. Seventy percent of the current Company began as members of Graham 2.