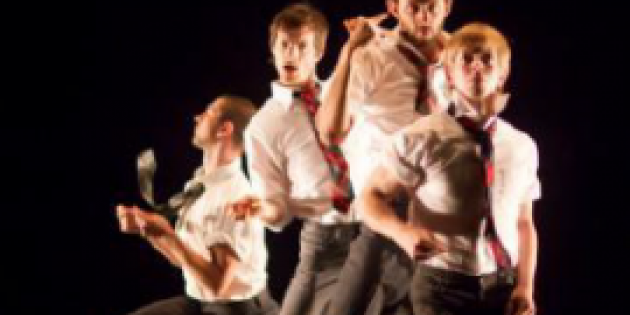 Two new works by Hubbard Street 2 Director Terence Marling
stop…stop…stop. (6 minutes) presents a lighthearted riff on power dynamics and miscommunication, featuring a young couple attempting to converse through fragmented voiceover, scrambled gestures, and the interruptions of a showman. Marling’s original score for stop…stop…stop. includes selections from Patricia by Cuban bandleader Dámaso Pérez Prado, popularly known as the “King of the Mambo.” The second work choreographed by Marling is set to the third Ruhevoll movement of Gustav Mahler’s Symphony No. 4 in G major and is 9 minutes long. Both works feature both main company and HS2 members.

Adalea, 15 minutes
Choreographed by Hubbard Street dancer Penny Saunders
Penny Saunders created Adalea as a farewell to Hubbard Street. She retires this summer after nine years with the company. Adalea is one of the names selected for her first born child. The piece includes vignettes based on universal rites of passage and choreography by Saunders originally developed for Chicago’s Benjamin Wardell and Michel Rodriguez Cintra. Adalea is set to music by Vincenzo Bellini, Tigran Mansurian, Göran Söllscher, and Antonio Vivaldi; mixed by Hubbard Street 2 Director Terence Marling.

For the Wandered, 18 minutes
Choreographed by Hubbard Street dancer Jonathan Fredrickson
Jonathan Fredrickson says For the Wandered, “is a piece for people who feel they’ve lost their way.” His Untitled Landscape from the first danc(e)volve: New Works Festival at MCA Stage in January 2012 joined the company’s repertoire for its 2013–14 season and was performed in Algeria, Morocco and Spain. For the Wandered features text by Fredrickson and Hubbard Street dancer Alice Klock; music by Johann Sebastian Bach, Ludwig van Beethoven, William Basinski, and Tim Hecker; and designs by Branimira Ivanova and Chicago-based visual artist Melena Ausikaitis.

Special presentation...
A special presentation on the program, to be titled, is by Hubbard Street dancers and staff who traveled to Algeria, Morocco, and Spain in March and April 2013, to perform and lead workshops in dance education as part of DanceMotion USA, a program of the Bureau of Educational and Cultural Affairs of the U.S. Department of State and the Brooklyn Academy of Music.

Inside/Out returns for a 12th year with two performances on July 6, 2013, at 5 pm and 8 pm, at the UIC Theatre (1040 West Harrison Street in Chicago). Tickets for Inside/Out — 5 (preferred “VIP” seating) and 0 (general admission) — will be available beginning Tuesday, June 4, online at hubbardstreetdance.com or by phone at 312-850-9744. • Hubbard Street 2 initiated the National Choreographic Competition in 1999 as part of its mission to identify and nurture young choreographers. Each year, the competition provides residencies allowing choreographers the opportunity to create original works for Hubbard Street 2 and conduct master classes for the community. The NCC has gained an esteemed reputation and international recognition, and has produced nearly 30 World Premieres.

• Hubbard Street launched its Inside/Out Choreographic Workshop in 2001, to provide a yearly opportunity for its company dancers and artistic team members to develop their choreographic skills and their understanding of all elements of dance production, including rehearsal management, marketing, creative rights, and costume and lighting design.

• Works and choreographers identified through both programs above are eligible for inclusion in each danc(e)volve: New Works Festival, which opportunity provides artists with still more production support and rehearsal time. From danc(e)volve: New Works Festival, selected works are brought into active repertoire for the main company and/or Hubbard Street 2, and performed during domestic and international touring engagements.
Hubbard Street believes this three-pronged model of selecting works for its repertoire can be a national model for artistic development, while proactively diversifying contemporary concert dance.